Despite the unpleasantly cold day, hundreds of people waited outside the Treaty 4 Governance Centre in Fort Qu’Appelle in anticipation of the arrival of a political rock star.

The Prime Minister Justin Trudeau’s arrival was a bit delayed but when he arrived the people gathered around him and greeted him with respect and applause. 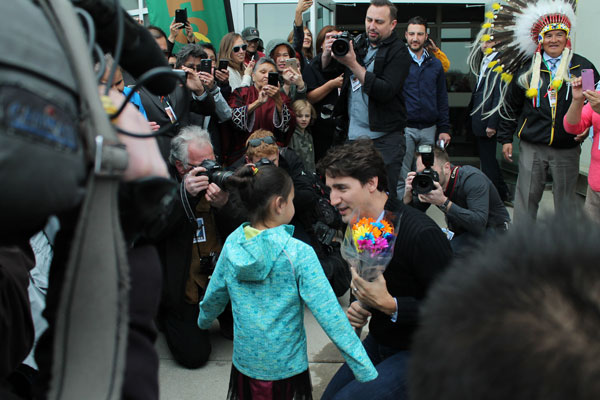 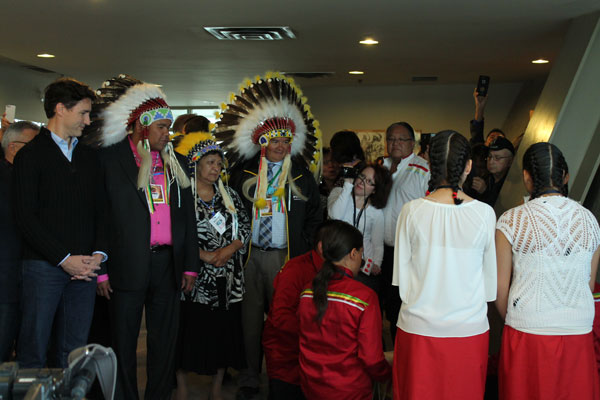 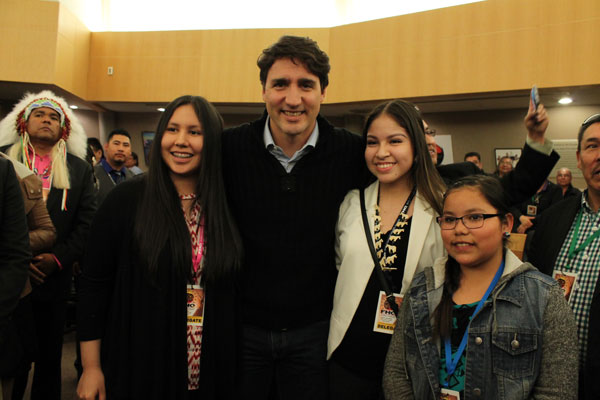 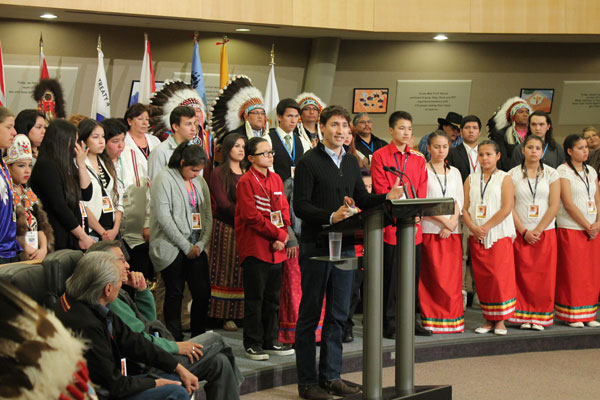 Check out our Photo Gallery from Trudeau's visit to Oskayak High School in Saskatoon.

A drum song was sung for him before he was whisked away to a private meeting with the 11 Chiefs and council of File Hills Qu’Appelle Tribal Council (FHQTC), along with Federation of Saskatchewan Indian Nations (FSIN) Chief Bobby Cameron and Assembly of First Nations (AFN) Chief Perry Bellegarde.

“The meetings like the one we had today are an important part of rebuilding relationships between Canada and Indigenous peoples and I’m honored to be part of this ongoing dialogue,” said Trudeau.

After the meeting, Trudeau made his way down to the tipi room where he would make his announcement. Trudeau spoke about the stories of heartbreak and hopelessness from communities like Attawapiskat and that the elders, young people, parents, victims and survivors all deserve to be heard before any action is taken and that it is critically important for politicians to take the time to listen.

“I don’t want to pretend that any of us have the answers to the challenges facing Indigenous people in Canada but what I will tell you that as a country we can build those answers,” said Trudeau.

Trudeau said his government remains committed to lifting the 2% funding cap for First Nations programs and the investments of the 2016 budget sets it well on the path.

“We will work with First Nations in the coming year to lay the groundwork for a new fiscal relationship; one that gives First Nations communities funding that is sufficient, predictable and sustained.  As I said, there is much work still to be done,” said Trudeau.

He announced that over the next five years his government will invest 8.4 billion dollars in improving the lives of Indigenous people in Canada.

This includes the 2.6 billion dollars towards improving primary and secondary education on reserve and nearly 970 million dollars in repairing, building and maintaining new schools on reserve.

He also said that it would mean greater facilities and programs that support early learning and childcare, and more funding for cultural and recreational centres.

“We also know the victims of violence need more help and starting this year we are making significant new investments to repair, build and support shelters for victims of family violence in First Nations communities” said Trudeau.

FSIN Chief Bobby Cameron said that the chiefs were optimistic about everything that Trudeau’s government promised to do during their campaign.

“It’s a down payment, of course we need more, but at least it’s a good start,” Cameron said about the budget.

He is glad that the PM is listening and implementing these recommendations coming from the chiefs. For his part, he said they had invited him to their FSIN assembly as they are a unified body.

“He has committed to coming to one of our assemblies so we look forward to that,” said Cameron.

Trudeau has emphasized that his government is focused on building a healthy partnership with Indigenous people and building a future.