The Saskatchewan Library Association featured two Indigenous keynote speakers at their annual conference: Lindsay Knight (aka “Eekwol”) who presented the 2016 Mary Donaldson Memorial Lecture and Joseph Boyden who gave a keynote on the last day of the gathering. 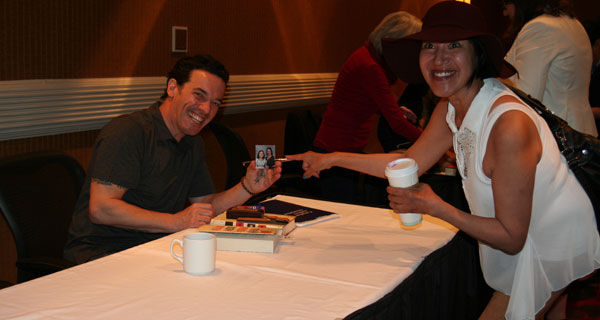 Provincial Aboriginal Services Coordinator Amber Boddy noted that the Saskatchewan Public Libraries are actively working to deliver Aboriginal Library Services which include providing information and promoting the histories, cultures, and traditions of Métis and First Nations peoples of Saskatchewan. Knight and Boyden are two Indigenous artists at the top of their profession and were inspiring additions to the conference.

Knight, who originally hails from Muskoday First Nation, lives in Saskatoon where she’s currently working for the Saskatchewan Arts Board. Having completed a Master’s Degree at the University of Saskatchewan, she continues an award-winning career in hip hop. She included a performance with her lecture, “Indigenous Conceptualizations of Creativity,” which was open to the public, followed by a reception.

Award-winning author Boyden, who now splits his time between Canada and New Orleans, gave a lecture entitled “Three Day Paddle: My Journey to Becoming an Artist.” Welcomed to the stage by drum group “Young Bucks”, Boyden was repeatedly met with enthusiastic applause, questions, and finally a standing ovation.

Separating the three acts of his lecture with harmonica and mouth harp styling’s, he read excerpts from his writing and told stories about himself, his family, and wider society.

“I’m beginning to understand the weight that comes with a name,” noted Boyden, speaking of the Anishnaabe name Basil Johnston gave him, “He Who Enlightens” or “Shining Bridge”. “It’s not something that you pull out of your pocket...it’s something that you live.”

“I became a writer for a reason, this is not a comfortable place for me as a person to address large crowds,” he observed, adding that it was a way to bring messages from his mixed-blood heritage and his own experiences and that of others, in order to build those bridges in himself and between others.

Speaking of an idyllic childhood, Boyden also shared some of his struggles with depression and suicide as a young man. His father passed away when he was 8 years old.

“As a teen I really got into a lot of trouble. I wish I had found more of my traditional ways, but I almost died a number of times, literally. I attempted suicide on my sixteenth birthday in a very real and traumatic way to my family and to me,” shared Boyden. “I got into a gang, I was going with the wrong crowd, it was getting pretty bad. I almost ended up in prison a number of times and I’m thankful that I didn’t. And the reason I share this with you all is that I’ve become an advocate for mental health issues in this country….I was suffering from depression and I didn’t know what it was.”

He now speaks, especially to Indigenous youth, about these topics because of his own personal understanding and experience, hoping that even if one life can be saved it is made worthwhile.

“It’s not easy to show your weaknesses to strangers but I think it’s vital,” he noted. “I think we need to start looking at all sorts of mental health issues in this country with a lot more compassion.”

His wife Amanda encouraged him in a more recent depression to focus on helping others, something which also helped him as he began to speak out. He emphasized the importance of not reaching “empathy burnout” as a society, and continuing to reach out to help one another. He is developing a workshop now that would start in Attawapiskat with movie-making, then Attawapiksat youth would carry it forward to another community such as La Loche, who would then pass it on as well.

“It continues to move forward, so that’s one of our ideas. We have to think outside of the box,” noted Boyden. “We have to recognize, too, where the trauma’s coming from. Suicide was not an issue, pre-contact.”