The 2nd Annual Developing, Diversifying and Evolving the Mining Supply Chain Forum helped kick off the 8th Annual Saskatchewan Mining Supply Chain Forum at Prairieland Park in Saskatoon. The overall Forum focuses on overviews of operations by Saskatchewan mining companies, provides information on opportunities and processes to supply equipment and services to the mining industry and also hosts a trade show with more than 200 mining and supplier companies. 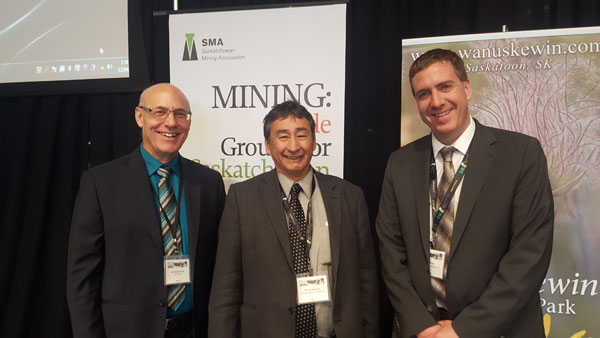 But it is the Developing and Diversifying Forum that has been the talk of the gathering for the last two years. The forum has become the go-to event for suppliers and Aboriginal industry groups to get together and talk about partnership opportunities and discuss strategies on improving Aboriginal participation in all aspects of the mining industry. Last year the suppliers started to hear the message from the major mining companies that Aboriginal employment and ownership in the supply chain was important to them, so now it has to become important to the suppliers.

The 2nd Annual forum brought in speakers who had experienced firsthand what is happening in the industry. Geoff Gay is the CEO of Athabasca Basin Development and he spoke of how his company was once heavily reliant on the mining industry for their revenues. And that can be both a good thing and a bad thing.

“We know that the industry can be cyclical like we are seeing this year,” said Gay. “That’s why we have diversified our group of companies in the past few years.” Now the company owns parts of a dozen businesses with percentages of ownership varying from 22% to outright and their businesses include a Pepsi distributor, an airline, and electrical company as well as construction, catering and security.

Jim Nowakowski is the owner of JNE Welding, one of Saskatchewan’s largest, full-service fabricators serving mining, construction, petrochemical and power generation clients across North America. He has been looking to mentor someone into his business as he intends to retire in the next few years. He gave an in depth presentation and lesson on the process he went through when a majority share of his business was sold to Des Nedhe Developments and the Peter Ballantyne Cree Nation.

“Be prepared to be patient,” said Nowakowski on the process. “What seemed like a simple deal took a full year from letter of intent to finish. That was a surprise to me. But the deal made sense for both partners. We are now in a situation in Canada where if a business is Aboriginal owned, it has better value. I feel like our business will be in good hands.”

The keynote address was delivered by Darrell Beaulieau, the CEO of Denendeh Development Corporation in the North West Territories. Beaulieau has decades of experience in the mining industry as well as a Skookum Jim Award for excellence in mining. He shared how important resource development is for his people in his territory. “

The Tlicho Government receives 95% of all federal income taxes collected from residents in Tlicho communities,” said Beaulieau. “So the more taxpayers living in Tlicho, the more taxes we receive. And the more high paying Tlicho mining jobs then the more income tax we receive.”

The involvement of Aboriginal people in business and in mining in his territory is almost overwhelming.

“There are over 500 Aboriginal owned businesses in NWT and at least 60 of them serve the mining industry,” added Beaulieau.  “And every First Nation and region has a business arm plus many joint ventures. So I ask you this, who says that Aboriginal people are against development?”

During the forum, networking breaks saw people chatting up potential deals and exploring areas of mutual concern. And it was all good news to Saskatchewan Mining Association President Pamela Schwann.

“Our members have been asking for exactly this type of forum where they could meet potential partners and to learn best practices. Geoff Gay and Jim Nowakowski both spoke very well to that,” said Schwann. “And to have a Skookum Jim Award winner like Darrell Beaulieau summarize it all was outstanding. I think our members received some very valuable information and the overarching theme was that Aboriginal owned helps bring value to a company.”