The reasons are different: looking for a new challenge, wanting to make a difference, caring for the environment, but one thing is certain, more women are getting into mining. And what they find when arriving in their career is helping to break down stereotypes of an industry. 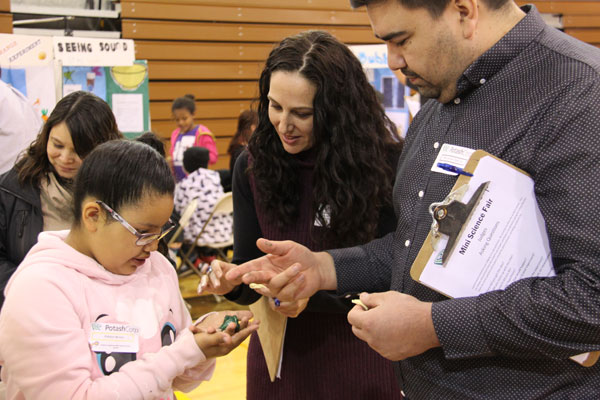 Lisa Mooney and her cohort at PotashCorp Milton Greyeyes check out a student’s experiment at the STC science fair. EFN

“Being an Aboriginal woman in the private sector, I wasn’t sure what to expect,” said Lisa Mooney. She went from working in not-for-profit organizations and the public sector to work as the senior Aboriginal relations specialist for Potash Corp.

“The mining sector is known for having a low representation of women.”

Mooney said what she found was impressive.

“Everyone I have met has been kind, genuine, open to learning, and willing to make the positive changes to have the most impact.”

That’s why Mooney wanted to get into the mining sector to begin with, to make a difference at the pace of business.

“I can really see the impact that our company and our programs are making,” whether in increasing Aboriginal engagement or increasing the participation of women.

The drive to do something different and have a positive effect with her job is what attracted Kristy Jackson to her role as the director of marketing and communications with Athabasca Basin Development.

“I really liked this company and I liked the direction they were going in and I really thought that I could do a lot of good here,” she said.

While Jackson doesn’t work directly in mining, she has found the industry to be a bit of a different world than the jobs she has had previously.

“The biggest thing I’ve noticed is when I attend functions the ratio of men to women is a lot different than what I’m used to. Sometimes I can count the number of women in the room on one or two hands.” 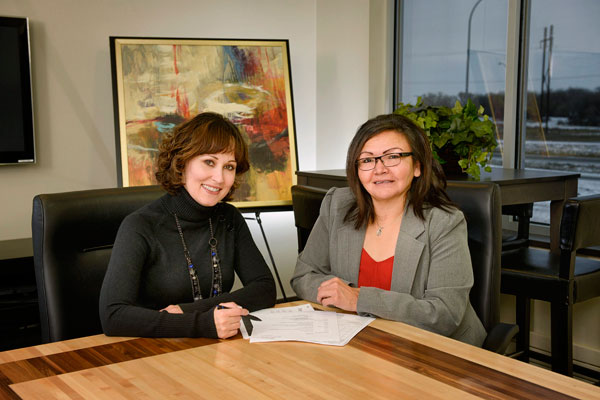 At the beginning, it was a bit intimidating, but it isn’t any more, Jackson said.

“I haven’t had any Mad Men kind of moments,” she said and laughs.

“I haven’t had a lot of the challenges I guess that maybe some have gone through, others have paved the way for folks like me, who have entered into it relatively recently. Things are pretty good now.”

On the mine sites, there are still significantly more men than women, but with 15 years’ experience there Kathryn DeBruyne doesn’t really notice it anymore.

DeBruyne is an environmental specialist at Cameco’s Cigar Lake operation. She works an hour flight from her home, and family, in La Ronge.

“It’s totally male dominated, but I’m used to that,” she said.

“This is basically all I’ve really known, and when I took engineering [that’s] mostly male dominated, so I don’t really even notice.” 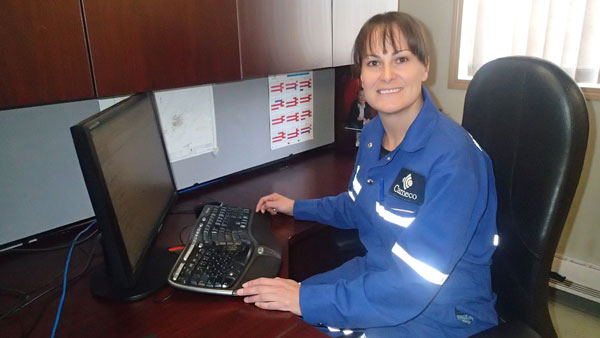 Kathryn DeBruyne at her office at Cameco’s Cigar lake mine. Photo supplied

She started as a summer student at Cigar Lake and then was an environmental monitoring technician, before starting her environmental engineering degree with the support of the Cameco. They gave her 80 per cent of her salary plus tuition and books, and DeBruyne make the commitment to return as an environmental specialist after graduation.

When it comes to her role on the mine site, she said she doesn’t think she is treated any differently because she is a woman.

All three women, DeBruyne, Jackson and Mooney said that women should look at getting into the mining sector because of the diverse opportunities available.

But the benefit can go both ways.

“I think the mining industry could benefit with having more women in the industry; women provide new perspectives,” DeBruyne said.

When it comes to the question that women face about work/life balance, all three women have found ways to make it work.

Mooney’s two girls are now 23 and 20. She says that Potash Corp makes it easier to be a single parent because they are family friendly and there isn’t a lot of fly in/fly out work. A parent could work, be part of the community and still be home in time to coach their child’s softball team, she said.

As a mom living and working in Saskatoon, Jackson said that her job is similar to many working moms, it’s difficult to achieve a perfect work-life balance.

“I think we all feel like, ‘holy cow the week’s a whirlwind’ and at the end of the day we are quite glad we survived it, but it’s a heck of a lot of fun too,” she said.

Flying-in/flying out mining can make parenting daunting for some, but DeBruyne relied on family support when she started out. Now her 11-year-old is used to their schedule. They facetime on the nights that she is on site and when she gets home she has a singular focus. He son gets all of her devotion.

“All of my attention when I am home, you know what I am mean, I’m not distracted because I’ve had a long, hard day at work and I have to make supper.”

She has one piece of advice for women looking towards their future.

“Just set your goals, even if you have children, you can do it.”