The Beardy's & Okemasis First Nation says it is making history in the province and country by holding a two-spirit pride festival.

“This is historic!” exclaims Kevin Seesequasis, the first openly gay Councillor with the Beardy’s & Okemasis First Nation. “We’re going to be the first in Saskatchewan to openly, and proudly, say to individuals in our community – especially youth who may be questioning their sexual orientation or are gender variant – that it’s ok to be who you are; that our leadership supports you, we love you, and we are going to celebrate you!“

In a historic first in Saskatchewan – and only a second in Canada – the Beardy’s & Okemasis First Nation will celebrate and honour Two-Spirits – Indigenous individuals identifying as either Gay, Lesbian, Bi-Sexual, Transgender, Queer, or Questioning – in an inaugural Two-Spirit Pride Festival on June 9th, 2016 on the First Nation located 45 minutes north of Saskatoon.

The Proclamation was signed by all members of Chief and Council. You can read the entire resolution here. 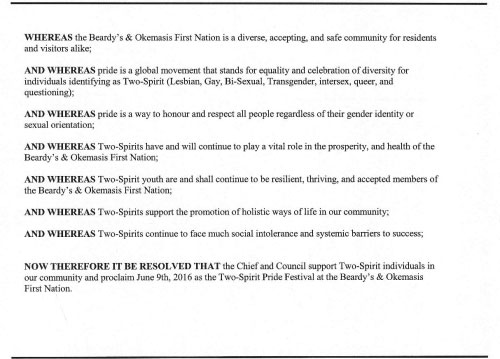 A portion of the band resolution.

“More and more youth are identifying as Two-Spirit in our community, we want to acknowledge you and let you know you’re not alone,” added Chief Rick Gamble.

The pride festival will kick-off with a parade through the community to the Band Office followed by a ceremonial Flag raising and BBQ over lunch. Individuals and groups who wish to join in the festivities are encouraged to do so.

“We invite everyone in our community to join us and come together to proudly proclaim that we celebrate and welcome diversity – it all its forms,” concluded Seesequasis.