Flag of Reconciliation raised in Saskatoon

Residential School survivor Eugene Arcand encourages everyone to build the Truth and Reconciliation Calls to Action into each day. He instructed those present at the Reconciliation Flag-Raising to go and shake hands with someone they didn’t know.

Related: Community kicks off month of activities to promote reconciliation 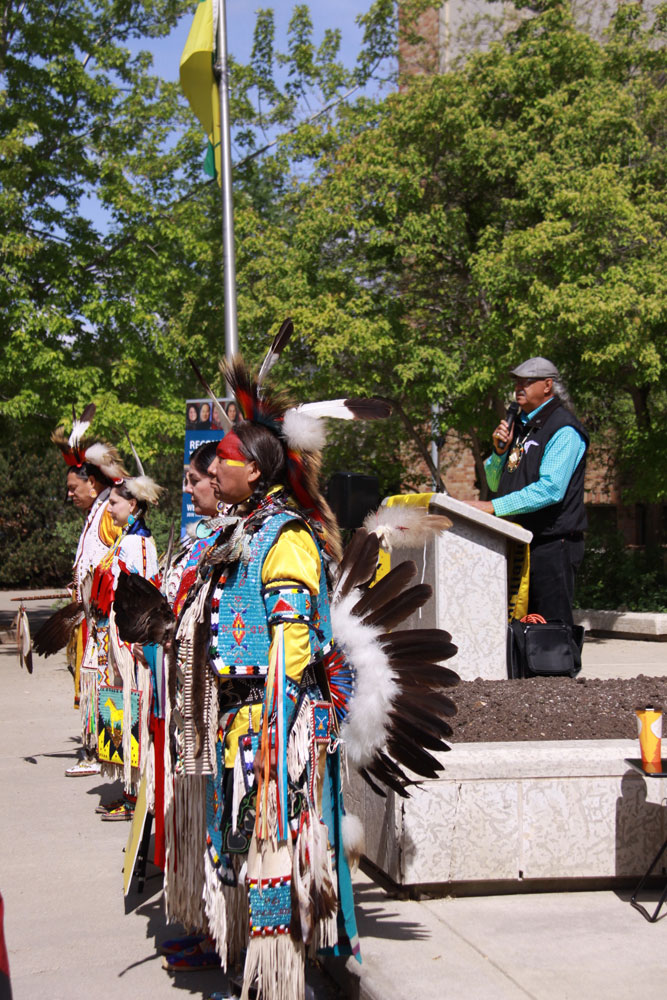 “You’re all smiling now, it can be fun to follow the Calls to Action, and I challenge you to take up that challenge every day,” noted Arcand, further challenging everyone to commit this June to reading, sharing, and bringing to life the 94 Calls to Action in the 20 page document put out by the TRC. “It’s more than shaking hands, it’s changing behaviour so that attitudes change.”

Arcand was one of many speakers and dignitaries to speak to the crowd gathered in front of City Hall on the morning of June 1. Shae Eagle sang O Canada in the Dakota language, followed by Krystle Pederson singing the Métis National Anthem, while the Wild Horses Drum Group sang the Treaty 6 Song. STC Tribal Chief Felix Thomas shared his thoughts, including the dictionary definition of reconciliation.

Check out our PHOTO GALLERY from the Flag Raising.

“Reconciliation means the restoration of friendly relations,” noted Thomas. “And we know that the treaties, the gifts and obligations, were made in peace and friendship...these responsibilities are on all of us.”

More on the Truth and Reconciliation Commission and Residential Schools:

Mayor Don Atchison brought greetings on behalf of the city, recalling the installation of the Treaty 6 and Métis flags at City Hall and the importance of knowing the past so that the present and future can continue to improve. FSIN Senator Ted Quewezance reflected on his own experiences.

“From the perspective of a Residential School survivor, forgiveness is one of the hardest things to do,” said Quewezance, adding it took him about seven years of hard work. “All the terrible things they did to us as little boys and little girls...sometimes that little boy comes out, but it’s something as an individual, and a family, we have to move forward.” 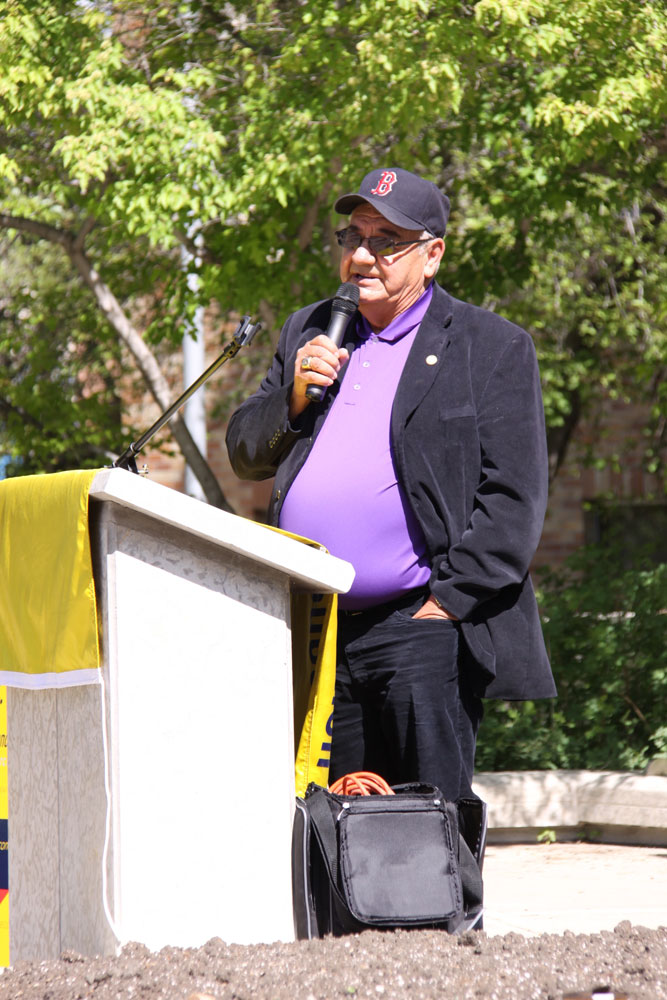 He emphasized the importance of culture and traditions, and the painful process of colonization, challenging each and every person to decolonize themselves despite the pain.

“We have to reach out, and as a survivor I’m reaching out to everyone because reconciliation is needed in our country, in our province, in our cities and in our communities,” said Quewezance. “Without reconciliation it’s not Canada. We are treaty people and we reached out to the settlers and today the benefits are there for all Canadians.”

CUMFI President Shirley Isbister noted that the process of preparing for this day had really inspired her, as people came forward with their TRC commitments.

“The Call to Action is individual, we each have to find how we’re going to survive day by day and welcome people into that circle of ours,” said Isbister, adding that’s the first step towards reconciliation. “Saskatoon is so rich in diversity and it’s up to us to mine that commodity.” 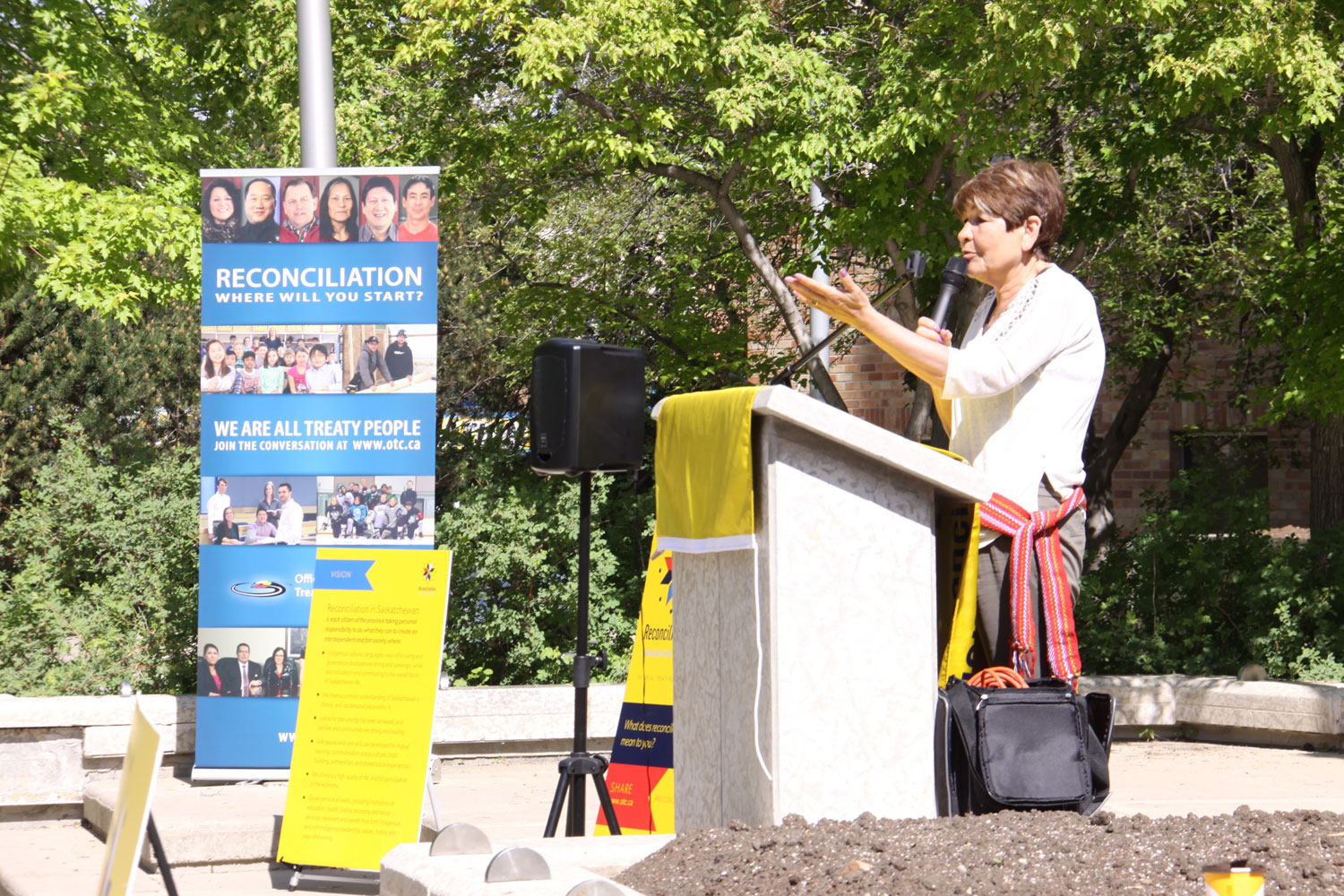 After a Métis music break with Phil and Dallas Boyer, Leanne Bellegarde brought valued sponsorship greetings from PotashCorp, Acting Police Chief Mark Chatterbox brought greetings from the Saskatoon Police Service, Rev. David Moors of the Mayfair United Church spoke, and Harry Lafond brought greetings from the Office of the Treaty Commissioner. Survivors shared words during the Honour Songs, while the Reconciliation flag was raised by veteran Edward Baldhead, after first being passed around for everyone to touch in a ceremony of unity and reconciliation.

In a release, Assembly of First Nations (AFN) National Chief Perry Bellegarde echoed the sentiments expressed at the ceremony.

In advance of the one year anniversary of the Truth and Reconciliation Commission's (TRC) Calls to Action and in response to the Ontario government's apology and commitment to reconciliation, Bellegarde called on all provinces and territories to work collaboratively with Indigenous peoples to set real benchmarks and timelines for change.

"We've come a long way since last June," said Bellegarde.  "With commitment from the federal government to address the TRC's calls to action and (the) expression by the Ontario government, I'm urging all provinces and territories to step up and show how they will act for change.  With government support and First Nations ready for change, we have an opportunity to close the gap and make reconciliation real for all of Canada.  We cannot miss this opportunity!"

About 30% of Canada’s Residential School Survivors reside in Saskatchewan, where more than 20 IRS operated. The final IRS in Canada closed in Regina in 1996.