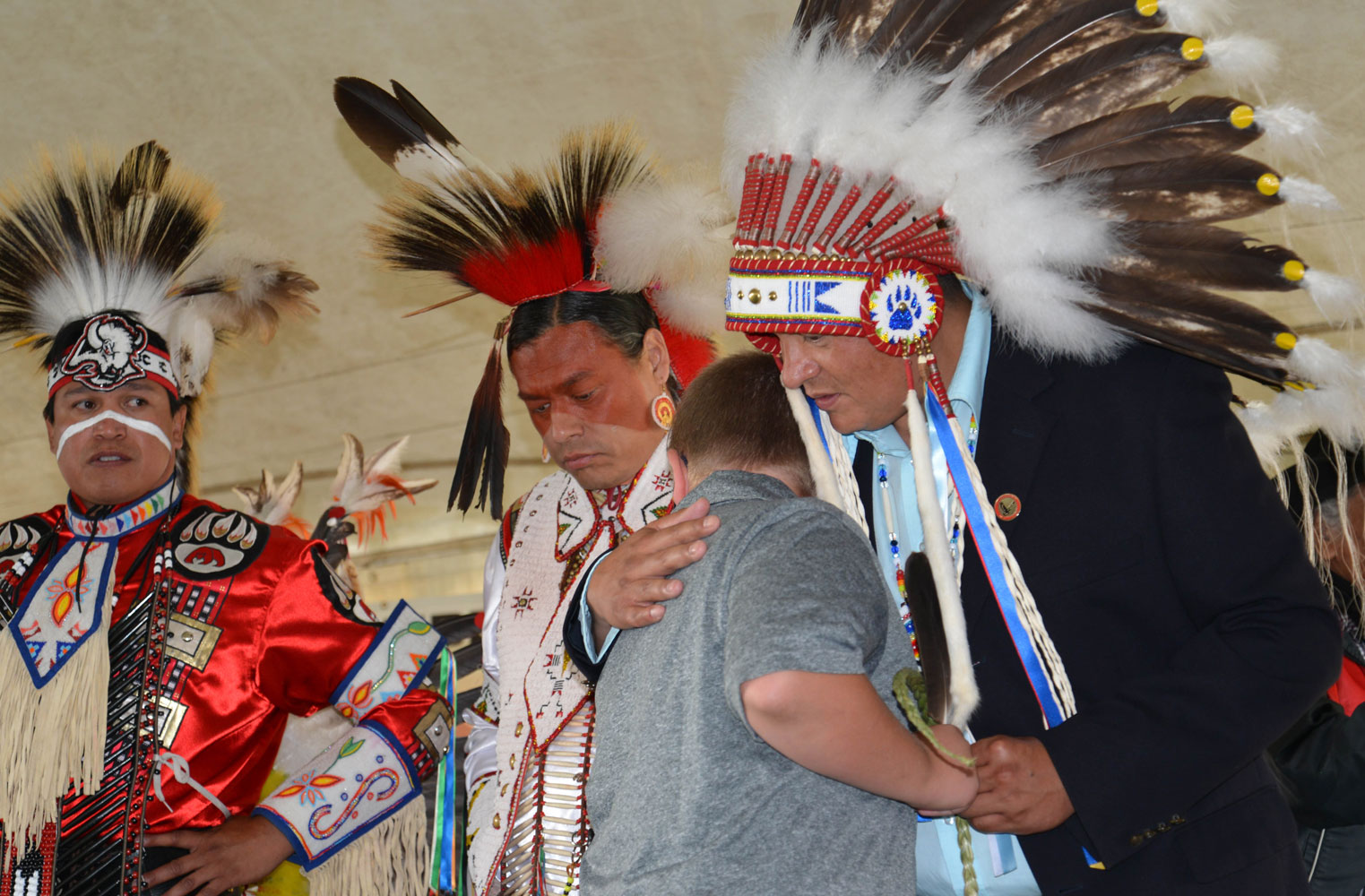 FSIN and chiefs present Luca with an eagle feather and Sweetgrass.

In 2006, Constable Robin Cameron from Beardy’s/Okemasis, and RCMP partner Constable Marc Bourdages, were fatally shot in Spiritwood while on duty. The community of Spiritwood has not forgotten them, and along with the RCMP have planned a local memorial park to honour their memory.

The project recently received a boost after several donations came in during an emotional ceremony at the park in Spiritwood on July 6th to honour the tenth anniversary of the event. His mother stood in support behind him, as 10 year old Luca struggled to read a tearful tribute to his father at the 10th anniversary memorial and honouring event commemorating the shooting deaths of RCMP Cst. Marc Bourdages and his partner, Cst. Robin Cameron. 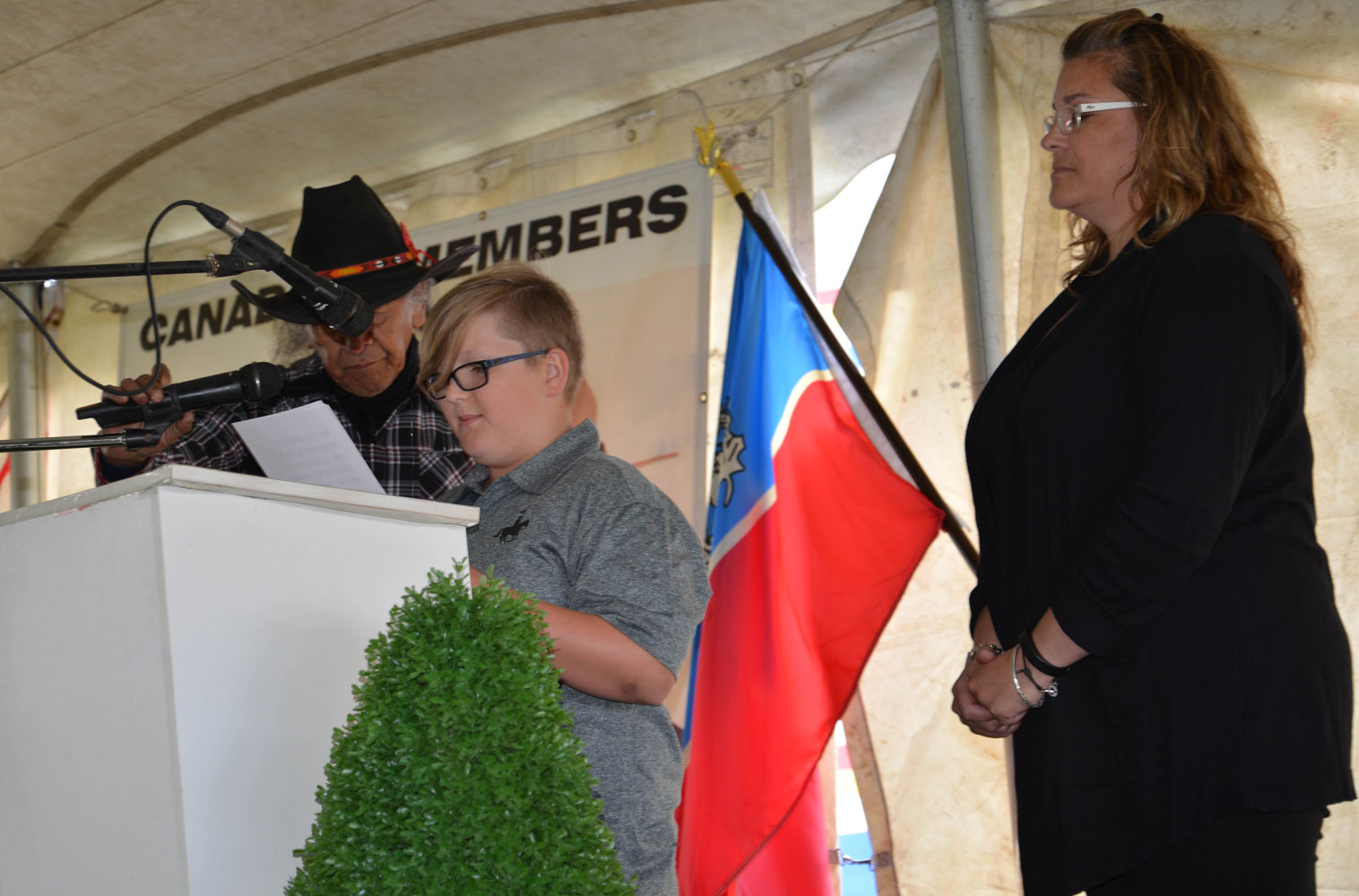 CST Bourdages' son Luca, who was an infant when his dad died, addressed the crowd in a tearful poem about his father.

"I just know that he used to talk to me and hold me all the time," read Bourdages as he fought back tears. Luca was just 9 months old when his father was gunned down and killed in the line of duty. "There's an ache within my heart that will never go away."

It was a sombre event filled with tears, laughter and heartfelt tributes to both mounties, who made a deep impact with the communities they served before their passing 10 years ago.  The Witchekan Lake First Nation's Kisikohk School students raised $2000 for the Bourdages Cameron Memorial Society, which was matched by the band.  A community fun run and walk was also held which raised over $3000 towards two bronze statutes of the Mounties which will be erected in a memorial park in Spiritwood at a later date.

“We heard that they were planning on doing something for them, we never knew it was going to be a memorial park,” said Diana (Cameron) Laliberte, Robin’s younger sister. “When things got going, they contacted us and asked if it was ok to do it. We all supported the committee from the beginning. They have all been amazing!” 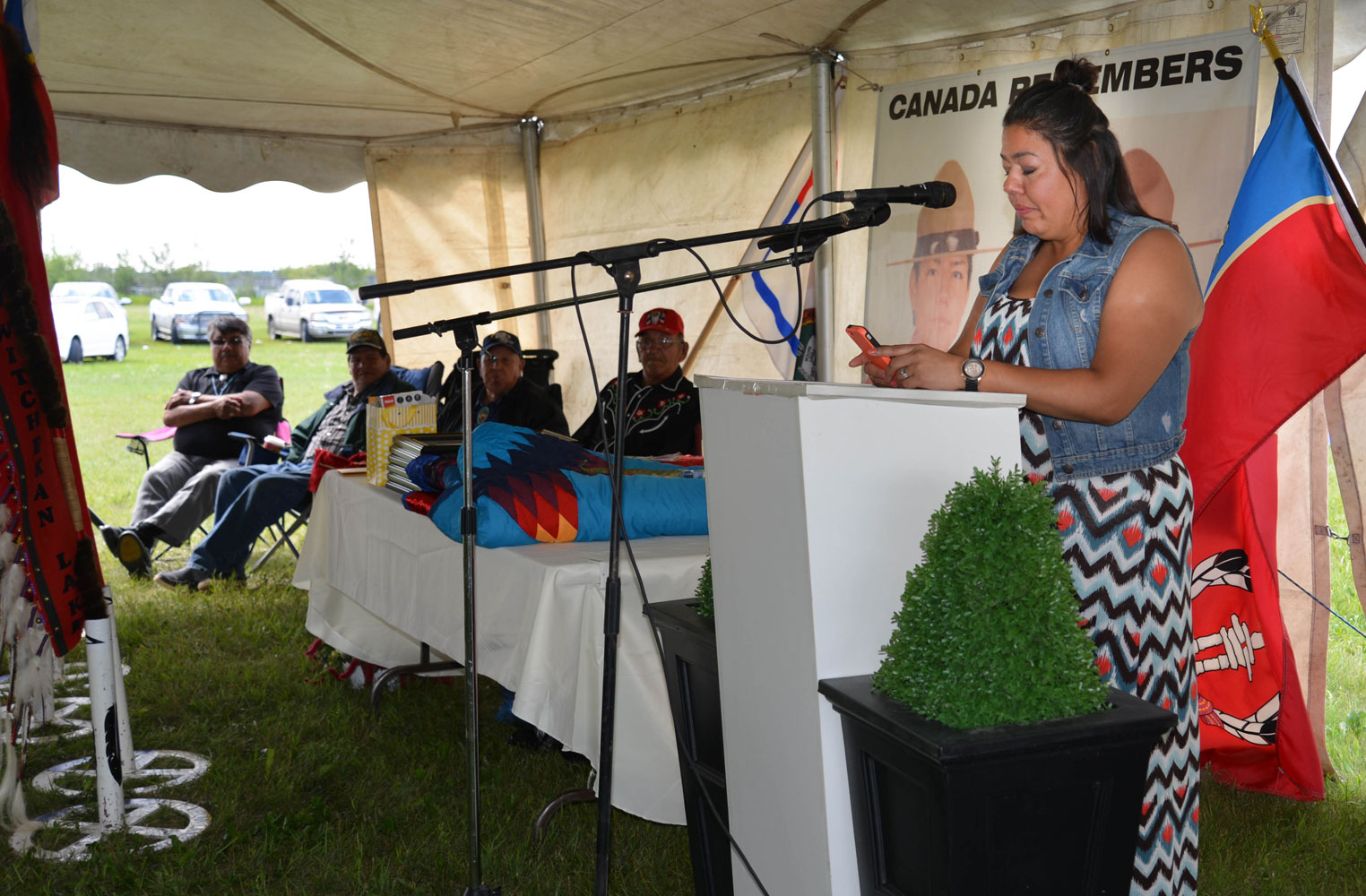 Check out our photo gallery from the memorial event.

From the fundraiser at the RCMP depot in Regina, to the 7 Regimental Ball in Spiritwood, and everything in between, Diana notes they have been working very hard to make things come together.

“We can't wait to see the final outcome,” she added. “We all thought it was amazing. That after all these years, people still want to remember Robin and Marc. What better way to honour their memory than this memorial park.”

The family has been involved in the whole process: all the minutes from the memorial society meetings are emailed on, and they have been constantly contacted regarding any big decisions.

“They have our utmost support in the whole thing,” she noted. “We can't say thank you enough to the community of Spiritwood, the RCMP and of course, the Memorial Society. On behalf of our family, words will never be able to fully explain how grateful we are for keeping Robin and Marc's memory alive. I am at a loss for words for how much support has been given.”

Sgt. Shannon Haggarty of the Spiritwood Detachment noted that the community is commemorating the tenth anniversary with a number of events in July. Rochelle Duret, chair for the Cameron and Bourdages Memorial Society committee, wrote that the Spiritwood arena had been named the Cameron Bourdages Arena in their honour, but recently a new multiplex centre was built and renamed for a generous corporate sponsor.

“It became clear to a group of us in Spiritwood that our community...needed a public memorial to commemorate and recognize our own fallen Constables,” said Duret. “Our committee’s vision is to build a memorial park that is a place of peace, remembrance, pride and gathering for the community.  We plan to have two life size bronze statues created.”

With the support of the Spiritwood detachment, former MP Rob Clarke and RCMP Sergeant, and the town who donated a parcel of land, along with the inclusion and blessing of both the Cameron and Bourdages families, they hope to have the project close to completion this summer.

“This would be such an amazing opportunity for something wonderful to come out of such a dark part of our community’s past,” said Duret.

The Cameron and Bourdages Memorial Society are still accepting donations, and there is opportunity for signage and advertising in the park. They can be reached at candbmemorialinc@gmail.com, Box 460 Spiritwood SK, S0J 2M0.