U of S produces world's first in vitro bison calves

Veterinary researchers at the University of Saskatchewan (U of S) have successfully produced bison calves using in vitro fertilization—a world first. 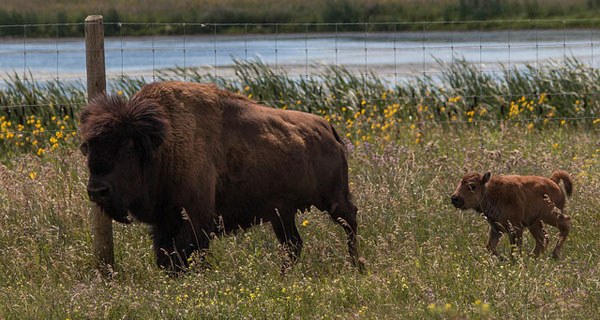 All photos by Caitlin Taylor

The four wood bison calves grazing beside their protective mothers look just like any other bison—but what makes these animals unique is the way they came into the world.

Three calves are the first bison ever born using in vitro fertilization. Researchers produced them in a laboratory, then transferred the embryos into surrogate mothers more than nine months ago. The bison cows gave birth to the calves earlier this month.

The fourth calf was produced from a frozen embryo that was taken from a bison cow in 2012 and transferred to a surrogate mother in 2015—another reproductive first for the bison species.

"The babies look great," said Dr. Gregg Adams, a professor and reproductive specialist at the Western College of Veterinary Medicine (WCVM). "They're keeping up with mom, and I'm really happy about it." 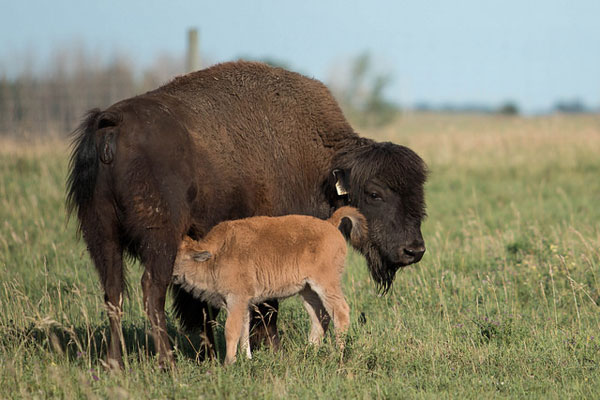 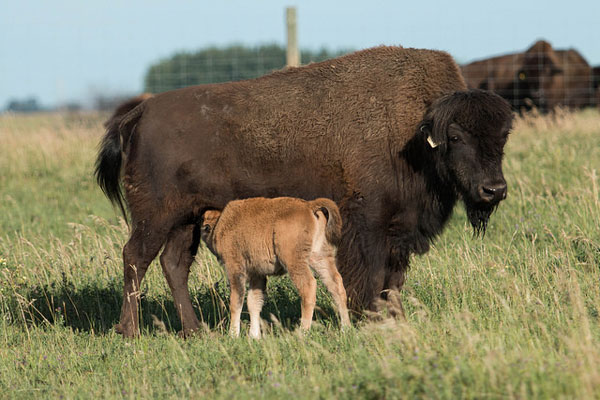 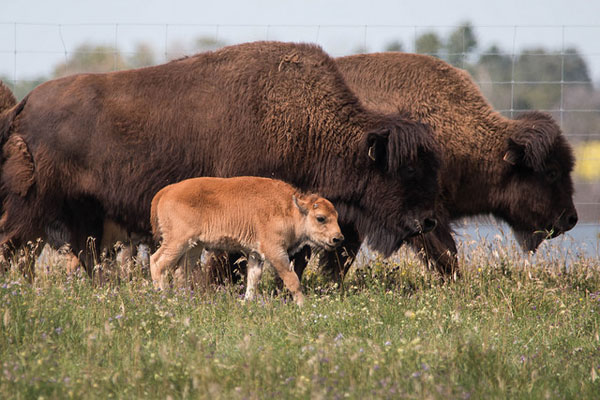 Adams has conducted reproductive research of wood bison for nearly a decade. Indigenous to Canada, the wood bison are threatened both by disease and loss of habitat.

"It is tremendously gratifying to see this. I'm excited. I'm hoping all the different interest groups will see this as a real possibility, a solution to the problem," said Adams.

Between 5,000 and 7,000 wood bison remain in the wild—less than five per cent of their original numbers. Scientists hope that this reproductive breakthrough will help retain genetic diversity and eventually rebuild the depleted wild herds.

While there are many parallels with reproductive work in cattle, bison present their own unique challenges. Foremost is the presence of disease in both the plains and wood bison herds. Bison herds are infected with brucellosis and tuberculosis, diseases that were introduced by exposure to infected cattle more than 80 years ago, and that can be spread to both cattle and people.

"Besides a loss of habitat, which has been significant, these diseases have prevented us from getting back and reconstituting the population," said Adams.

By using advanced reproduction techniques such as artificial insemination, superovulation—a process of inducing the female to release more than one egg per cycle in order to produce multiple eggs available for fertilization and more in vivo embryos from a single donor—and in vitro fertilization, researchers can disinfect the egg and sperm of the female and male bison—minimizing the chances of producing diseased babies or spreading disease.

"The whole objective of our program is to conserve the species. I think what we're doing with advanced reproductive technologies is really designed to preserve the genetic diversity [of the animals]," said Adams.

"If we can preserve the genetic diversity, I'll feel like I've done my job. That will benefit both the wild populations as well as any livestock producers."

Wood bison research began at the U of S in 2006, with the delivery of a herd donated by Elk Island National Park to the WCVM's Native Hoofstock Centre at Goodale Research Farm, 20 kilometres east of Saskatoon, Sask.

"It's been a tremendous amount of work," said Adams. He notes that four PhD students and a post-doctoral fellow have contributed vital research findings toward this recent achievement. Researchers from the University of Calgary have also collaborated on the research project.

Researchers first had to learn how the bison's reproductive cycle worked and characterize the species' normal breeding pattern.

"Really, none of that was known," said Adams.

Their first studies began with determining when the bison ovulates. Then they needed to figure out how to control the reproductive cycle.

On the male side, they needed to find out when to collect semen from the bulls and how to preserve the genetic material. Much of this work was done in the laboratory of cryobiologist Dr. Muhammad Anzar, whose lab developed techniques to produce and preserve disease-free, frozen semen. Anzar works for Agriculture and Agri-Food Canada, but is based at the WCVM.

In 2011, WCVM researchers conducted successful superovulation and embryo transfers on wood bison. Within the superovulation protocol, fertilization took place in vivo, in the fallopian tube of the female bison. Then, embryos were collected one week later and transferred to surrogate mothers.

This work, conducted by WCVM researcher Dr. J. Manuel Palomino as part of his PhD thesis research, was an important step in advancing reproductive knowledge and techniques.

WCVM PhD candidate Miriam Cervantes began her bison research the same year, and this latest development in in vitro fertilization has been the focus of her PhD program. Cervantes produced 10 embryos in the lab, and they were transferred fresh into the WCVM bison herd in October 2015. Another bison cow received a frozen embryo produced in vivo in 2012 by Palomino.

After diagnosing pregnancy in four of the animals after 30 days, the pregnant bison were left alone in the pasture to minimize stress. The researchers waited anxiously to see if the babies would be born.

"We are proud to say that our work has given a good result," said Cervantes. "We are very happy."

Now that researchers have developed these reproductive techniques, the next step is to retrieve and preserve genetic material from existing herds—providing the groundwork for preservation of the species.

Dr. Murray Woodbury, research chair of the WCVM's Specialized Livestock Research and Development Program, has provided professional herd management and oversight for the wood bison. Adams also credits the project's success to financial support from the U of S, Government of the Northwest Territories, Parks Canada and Saskatchewan's Agri-Food Innovation Fund.