Proud families and supporters filled the tables of upper TCU Place as the Strength of Women was celebrated in FSIN’s second annual event. But the celebration also commemorated women taken too soon. 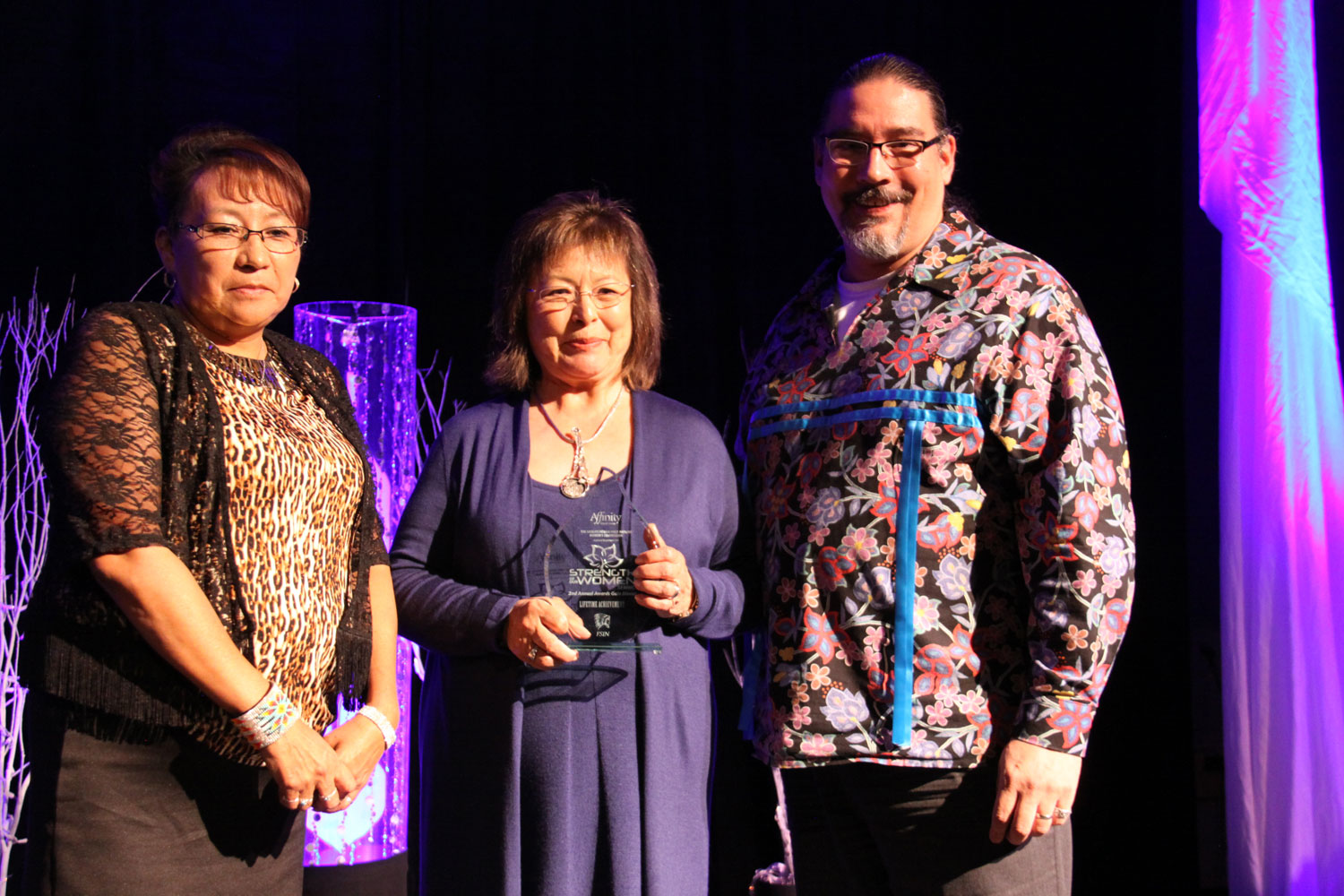 Ruby Whitstone opened the evening by describing the exhaustive search for her sister Violet Marie Heathen, beginning in Onion Lake and extending outwards.

“She disappeared into thin air and it wasn’t even on the news.”

Her sister’s skull was discovered in an Alberta field in November 2009, and investigators arrived at her home just before Christmas.

“This part of the story is funny and I want you to share and take this with you,” she said before comically describing how the investigators were mistaken for pushy Jehovah’s Witnesses letting themselves into her house. But then the sobering and tearful truth came: it was the revelation of Violet’s discovery, and all she could think was she had to go tell her mom. “The investigators never really told us what happened to her and they kept saying they had no leads.”

They did a memorial walk for her for four years. Finally they were told a man had been charged for Violet’s death as well as the death of Janet Chief. On August 16th the man plead not guilty and is in his hometown correctional centre.

“I’m raising awareness...we never expect this to happen to us, and we never know who it’s going to happen to, which family it’s going to affect next. I just pray it stops,” said Whitstone. “We don’t need our sisters taken that way.”

She invited everyone to support them in preliminary court for her sister May 8th to 12th, 2017 in Vermilion, Alberta, and June 12th to 16th for Janet Chief. She ended by praying nobody else would have to go through this.

Lori Whiteman shared what she knew about her late mother from others: a well-put-together young woman with movie star looks who wanted to be a nurse one day. Whiteman was scooped from her mother in the 60’s and has been looking for her ever since: Whiteman is the first mother in two generations of her family to raise her own kids, because her grandmother was lost to TB when her mom was two.

“My mom’s name is Delores Marie Whiteman. Her nickname was Lolly. She’s been missing for a long long time and may never be found.”

She described the Place of Reflection project, hundreds of stones in a medicine wheel to represent MMIW&G installed at the Regina RCMP training depot, undertaken with Lyndon Tootoosis to commemorate her mother and so many others.

Foregrounded by the impetus behind the event, with a silent auction to raise funds to support the families of missing and murdered women, the night then celebrated fifty-six outstanding nominees in twelve categories who exemplifed the strength of women, with entertainment from Teagan Littlechief, Pretty Indian Girls, Violet Naytowhow, and Zoey Pricelys Roy.

Delia Opekokew of Canoe Lake, recipient of the Outstanding Achievement Award from a field that included Marjorie Hyman and Ingrid Anderson, briefly and humbly discussed her very illustrious legal career now based in Toronto, including numerous high profile cases such as Leo Lachance and Dudly George, along with land and claim settlement agreements and adjudication with IRS claims.

“I’ve been doing IRS adjudication for the past thirteen years now,” she noted to EFN, agreeing it was nice to come home and visit while celebrating the accomplishments of so many Indigenous women. “There are two tables of family here with me tonight.”

Check out our Photo Gallery of all the winners.

Beverly Poitras won the Law and Justice Award from a field which included Alicia Keewatin-Wesley, Kellie Wuttunee, and Ntawnis Piapot.

Barb Lavallee was the Environment recipient, flanked by Janelle Pewapsconias.

Myrna LaPlante and Darlene Okemaysim-Sicotte jointly won the Leadership & Advocacy Award for their advocacy on MMIW&G, the fundraising and awareness focus of the event. Other nominees included Darlene Brander, Shelly Tootoosis, and Wilma Isbister.