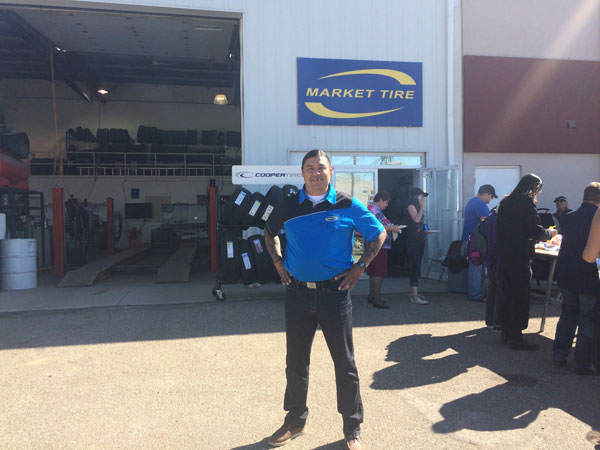 The first First Nations-owned and -operated tire shop is now open for business at a new location on the Muskeg Lake urban reserve on Packham Avenue, an area already known for successful First Nations owned businesses and company headquarters. Market Tire co-owner Sheldon Wuttunee has partnered with Greg and Brent Hoiness to open the established business’s newest location on-reserve hoping to fill a gap in the market in the province. Wuttunee says he and the Hoiness brothers began building a partnership years ago and expanding on reserve was an opportunity they didn’t want to miss.

“It’s a great opportunity to build an important service to our people and everyone in the community at large.”

Wuttunee adds that the new Market Tire "will meet the needs of potential industry partners across all sectors, from agriculture to the mining industry.” He says it’s also an opportunity to work with reserves, Tribal Councils and First Nations owned companies across the province wanting access to an essential service for their vehicles at an on-reserve location.

"It’s important to build capacity to truly contribute to the economy of our province.” says Wuttunee. Market Tire opened up shop in the city 40 years ago and as an established business, Wuttunee believes it was vital to build a partnership that will set the pace for other businesses and potential partnerships just waiting to happen. “It is critical that we as First Nations people do our part in building partnerships within our treaty areas with non-First Nations partners. It lends to a true realization of the spirit and intent of Treaty.  To work together for the benefit of all."

This Market Tire location currently offers tire sales and services, oil changes and battery service.  The plan is to expand into all areas of automotive service in the future.