A conference aimed to build better relationships between the media and Saskatchewan’s First Nation communities was held in Saskatoon at the University of Saskatchewan. More than 120 of journalists, editors, publishers, educators, public relations staff and students from across the province gathered to understand the need for reconciliation in the media. The event started on the evening of October 4, 2016 with a reception held at the university in the Gordon Oakes Red Bear centre—with more than 80 attendees.

“We began with a reception last night and wouldn’t you know, it was the first rain/snow of the season. We were very surprised and impressed that we had 80 people,” says The Star Phoenix reporter and conference co-chair, Betty Ann Adam. “It’s a relief and a joy--and a feeling of great satisfaction that the conference was so well received and attended.” 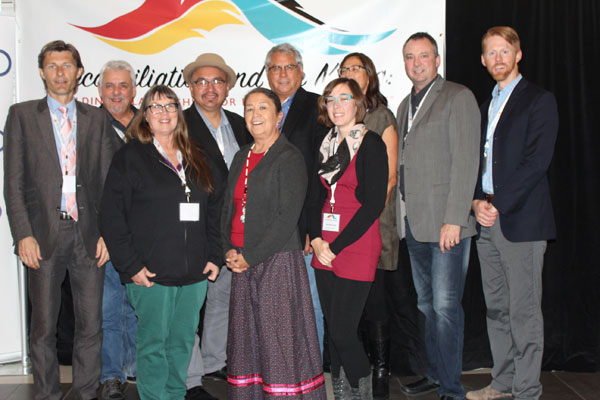 Check out our Photo Gallery from the Reconciliation & the Media conference.

The second day of the conference began with a morning pipe ceremony. It was a ceremony that was foreign to most attendees, including the owner and publisher of the Prince Albert Daily Herald and Moose Jaw Times-Herald, Roger Holmes.

“I really appreciate being welcomed and [being able] to participate in the pipe ceremony. It’s the first time I’ve ever experienced anything like that and it was a sacred ceremony. It was meaningful,” said Holmes. He was eager to take everything he learned at the conference back to his newsrooms ensuring his staffs utilizes the media handbook, a document that was created as a tool for the media in Saskatchewan on how to better cover First Nations issues.

“This is a great tool kit for me because I’m not overly familiar and I don’t know how to lead my staff to embrace this culture and issue. This tool kit is the nuts and bolts of what we need to start to do our job to lead our readers through the magnitude of the issue to help them understand and appreciate it,” added Holmes. “Embrace it as part of who we are and then be able to go forward as one people.”

Katie Sawatzky, a third-year student from the University Of Regina School Of Journalism, says she is going to start prioritizing Aboriginal people and their communities and to start fostering those relationships—one of the messages from Dr. Wilson’s keynote speech.

“Marie Wilson’s speech was just amazing. I feel empowered and like I have a job to do,” says Sawatzky. “It was a really great conference. I really enjoyed all the speakers; they all had so much to share. A key moment for me was when Betty Ann Adam got up to share her thoughts during the decision making panel. What she had to say was really inspiring: that we need to challenge our assumptions and that we need to think critically on how we’re framing our stories.”

“We handed out the evaluation forms and we will review [everyone’s feedback]. But when you were in the room yesterday, hearing everyone’s comments was a pretty good sign that another conference similar to this will continue in Canada...the next step is to have a reconciliation event and bring in people from across Canada,” said Brass.