Indigenous men and women have been contributing to the protection of our country for hundreds of years. There have been an estimated 12,000 First Nation, Métis or Inuit people that have served Canada in wars and in peace missions around the world. We know at least 500 gave their lives in the process. 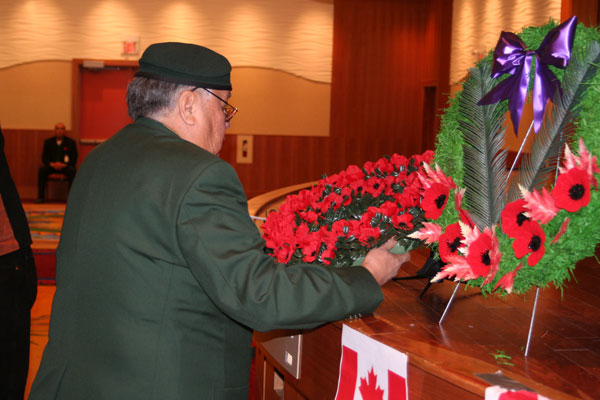 To honour their service, Canada has declared November 8th Aboriginal Veterans Day. We honour our veterans with this issue every year. We acknowledge some that have passed and we also support the Saskatchewan First Nations Veterans Association. These vets serve an important role in supporting each other and families of their members that pass. As time goes on, their membership is getting smaller. They are now reaching out to the new generation of retired soldiers to help expand their network and community service offerings. And there are more to come. Indigenous people continue to serve today with more than 1,200 First Nations, Inuit and Métis people serving with the Canadian Armed Forces. You will meet some of them in this issue.

Veterans are always included and honoured in our community. This is one thing we do very well. It is so good to see the veterans be there to lead the grand entry at events. Soldiers from young to old are always treated with respect. Organizations like the Gabriel Dumont Institute undertake massive projects to honour them. We go out of our way to shake their hands. The youth of Carry the Kettle host a scary Halloween walk through the woods every year. All funds raised go to support their veterans.

The Office of the Treaty Commissioner has also honoured our veterans. They have translated the famous First World War poem ‘In Flanders Field’ into Cree and Dene and shared it on their website and with the public. You can see them on page 6. If you want a real treat go to the OTC web site and you can see Dolores Sand translate and say the poem in Cree.

I proudly wear my beaded poppy from GDI from November 1st until November 16th. That way I honour all of our veterans and the passing of Louis Riel, the last Métis to fall after Batoche. And I also throw a donation in at the poppy table at the mall. The fundraising for the legions is important, too. These folks need a place. But we always have to remember that our Indigenous veterans weren’t actually allowed in there until the 1960’s because of their race. Lest we forget.

The insanity that is the United States is terrifying. The election of Donald Trump as President validates the voices of the activists and the oppressed that have shouted from the mountain tops about racism and violence in the United States begat on the minorities of that once great nation. Now it is a liability in the world. When the head of the Klu Klux Klan comes out and calls the election of Trump a good thing, be afraid.

Also terrifying is listening to the boastings of the “white heterosexual male” who called in to Gormley how this result was because of guys like him and how this is good for the world and will lead to peace. I am still in shock.

The December issue will feature our news maker of the year. Do you have a suggestion? We are looking for people who did something special, or got in the news for a reason (we hope for something nice, not Trump like). Hit us up on Facebook or go vote in our reader’s poll on our home page. The big reveal will be December 9th on our website and with our December edition.

Make sure you vote. Just look what happened in the United States.