On Louis Riel Day, Saskatoon Public Library (SPL) announced a name honouring Métis people for its newest location in the community of Stonebridge. Each year on Nov. 16 the Métis Nation comes together to honour Louis Riel who was executed on this day in 1885 for defending the rights of his people. 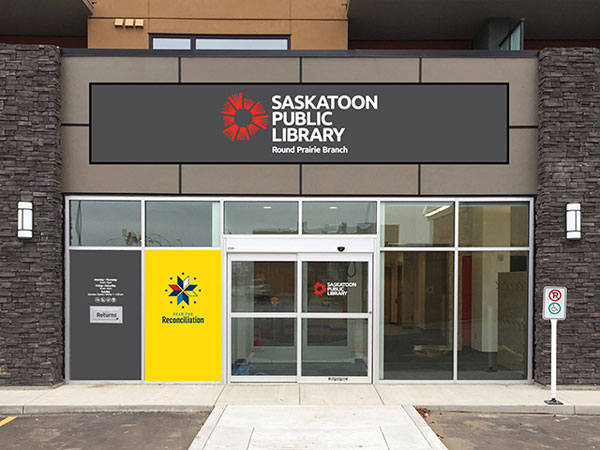 The Saskatoon Public Library has named its newest branch, located in the Stonebridge neighbourhood, in honour of Métis people and announced the new name on Louis Riel Day. The branch will open in December.

SPL consulted Indigenous Elders representing many Indigenous and Métis peoples, languages and cultures in Treaty 6 territory and the traditional homeland of the Métis. The gatherings were hosted by the Office of the Treaty Commissioner and included discussions on names brought forward by each representative. One name resonated: Round Prairie.

“We knew that we wanted to honour Indigenous people with the naming of this new facility, and we’re pleased to open the doors to the Round Prairie Branch in December,” says Carol Cooley, Director of Libraries and CEO for SPL. “As an active member of Reconciliation Saskatoon, SPL has firmly committed to answer many of the Truth and Reconciliation Commission’s Calls to Action. The naming of this branch is one step in our journey, and we are proud to honour the legacy of the Round Prairie Métis,” she added.

La Prairie Ronde (or Round Prairie) Métis were a community of buffalo hunters who established a wintering site near Dakota Whitecap in the late 1800’s. In the 1920’s and ‘30’s, many in the community were forced to migrate to Saskatoon in search of work. By the ‘40’s they had established a permanent and close-knit community close to the site of the new SPL branch before they were forced by the Crown to relocate in the 1950’s.