Fitness Tips from Fitness 2J2: How does a New Yorker say Saskatchewan?

For the past four years I have applied to the New York Marathon, the largest marathon in the world.  Regularly at least 50,000 runners for the whole 42.2kms, with 1.5million spectators.  Brining out Olympic and professional athletes who are competing for money and prizes, it attracts celebrities like Alicia Keys (Singer actress); Puff Diddy (Hip-Hop); Theo Rossi (Actor from Sons of Anarchy); and regular “Joe’s” like me.  This year I got in!!

This past month I finally had the opportunity to run in the New York Marathon, it was an amazing experience, I still am not sure how pivotal it will become for others and for me. The journey to the marathon was long, many months of preparing and training.  Some of these sessions were with you in the Northern Communities I have the privilege of programming in during the year.   Others were on my own logging in the km’s that needed to be done, often a time for me to meditate and connect with nature.  I don’t usually listen to music while I run; I enjoy hearing what is around me, and even hearing my own feet hit the ground.

The day before the run we went to the sport expo to pick up the race bib and meet up with the running club I was going to be running with (New York Police Department Running Club). There were several thousand people in the convention center and a lot of excitement; people from all around the world speaking their languages, getting pre-run photos and running gear.   This was the same facility the Democratic Nominee Hilary Clinton’s team was preparing for their election celebration.  The entire convention center was a busy bee-hive of activity. 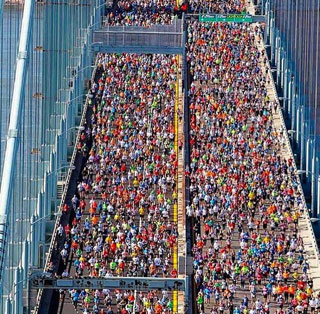 Race day the NYPD running club over a thousand members gathered at the New York Justice Institute, many newbies like me for their first NY Marathon, others this was what they do every year.  A quick prep speech by the President of the club and good luck to the members who would be racing against the NYFD for the Mayor’s cup.  We boarded our busses and off we went to Staten Island for the start; we passed through downtown Manhattan, past ground zero and the new World Trade center building.

Our staging area was part of a park that had been a military fort during the 1700’s when the American Revolution had taken place.  I found a quiet place where I could see the river, feel the sun, hear the birds; I took some tobacco out that I had brought and made offering.

The weather was perfect, sunny +10, light wind off of the Cooney Island area, we were starting in different waves, the first wave was 0900am: mine was 1040am so I still had time to prepare.  The marathon was extremely well organized and lots of NYPD security presence on the ground, in the air, and on the water.  As we started to move into our start line, I could see the endless sea of people from the previous wave.  I felt a calmness that I usually don’t have when I start off on a race.  I looked around and in front of me were several hundred people doing their last second adjustments; I looked behind me and could not see the end of people.  Lots of positive emotions and comments by everyone around, the MC came on and started to get everyone motivated and ready.  The NYPD helicopter hovered only a few hundred feet away from all of us, the officers waved and you could see the smiles on their faces.   3-2-1-Go… 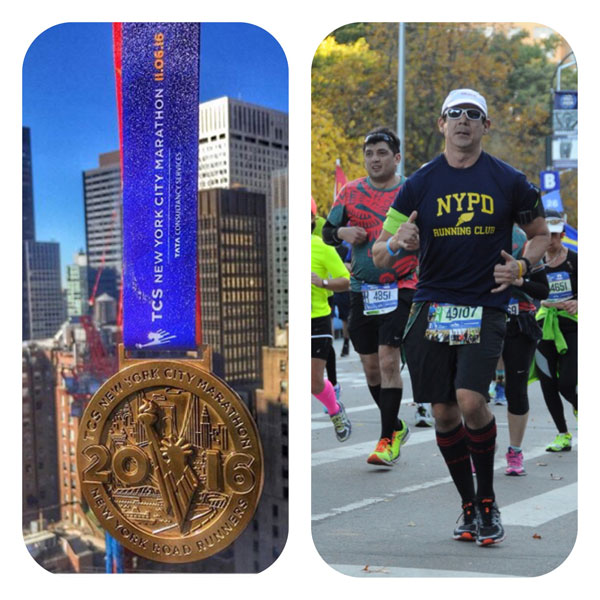 The first 10km I had decided I would tribute to my family and all my relations; my work family and colleagues; to all the 2J2 family I have had the privilege of meeting and training with.  This brought me into Brooklyn and over a huge bridge.  My next 10-20km I had decided to tribute to those who I know struggle with mental health and addictions, and for those who have not found help yet.  By this time I was almost through Brooklyn and into Queens, the run was going great, so many people on the streets and cheering us on.  The next 20-30km I choose to honour the families who have been affected by Missing Murders Indigenous Women, to heal and to empower those who are ready.  Over another bridge, out of Queens into Lower East Side Manhattan, still feeling really good and heading into the Bronx.  30-40km, I chose to tribute to all involved with the Standing Rock Protest and the struggles of Racism we as Indigenous people deal with.  By this point I was through the Bronx, which was my favorite part of the run, as there was live HipHop DJ’s and dancers, now into Harlem and continue the dance hip-hop party!  My legs were starting to feel a bit tired.  My last 2km of this 42km journey was electric, the crowd on 5th Av Upper East Side and into Central park cheering and carrying those of us that needed a little extra.  I didn’t see them, but there was my family, they were able to see me and cheer me on too.  The finish line was in view, and the last 400meters was up hill; over the line; and walking into the finisher area.  It was done! I felt strong, the area was busy thousands crossing the line, some collapsing’ and requiring medical attention, some so emotional they couldn’t stop crying with joy.  My exhaustion had turned again into a huge smile; I looked up to the sky and gave thanks.

When we set goals, we develop hope for ourselves and others. It has always been my intent to share this with as many people as I can, in as many places that I can get too.  You can do infinitely more than you think you can do…You just have to believe, and never give up.

Fitness 2J2 is a socially responsible community based health and wellness company. Contributing to the success and vitality of our communities, promoting healthy and positive lifestyles for Aboriginal people of all ages and abilities.  STRONG HEALTHY PROUD.