December was to be a month of action in support of the #NODAPL movement (No Dakota Access Pipeline). Even though the pipeline has been rerouted, water protectors at Standing Rock, North Dakota say the fight is not over. So Eagle Feather News wanted to highlight some of our own women from Saskatchewan to tell their stories about Standing Rock.

We start with Danna Henderson who is Anishinaabe (Ojibway) Nakota (Assiniboine) from the Pasqua First Nation. She is a licensed practical nurse and a mother of four children: Dānnalee, Antoine and Daynyn. Henderson traveled to North Dakota with her father and new born son. She also organized solidarity events in her home community and Fort Qu'Appelle, Saskatchewan.

Chasity Delorme is Cree from the Cowessess First Nation. She has two teenagers. She also has a two year old adopted son.

Jessica LaPlante is Cree from Day Star First Nation. She is a proud mother to one boy named Jesse.

Check out our PHOTO GALLERY from all three women's travels to Standing Rock.

Each of these women not only traveled to Standing Rock multiple times, even during this year’s bitter prairie winter, they also created and participated in solidarity events back here in Saskatchewan. 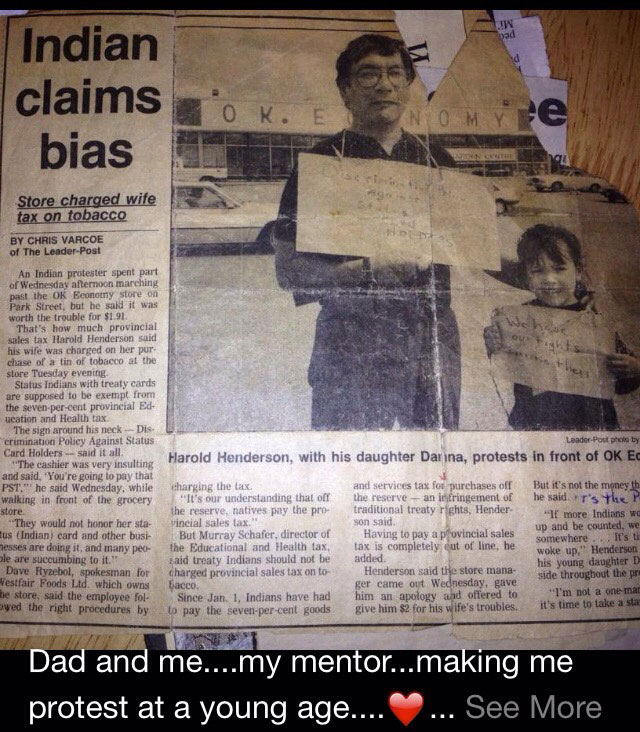 Protesting and standing up for Indigenous rights is in Danna Henderson’s blood. Her father, Harold Henderson has been advocating for Indigenous/Treaty rights for decades and he made sure his daughter knew how to fight injustices from a young age.

“He actually took me to my first protest when I was like five and we protested the PST? The sales tax?” She laughs, “I don’t know. I was just a kid with a sign marching back and forth.”

Henderson says her father had been paying attention to Standing Rock from the beginning and although he was going through medical treatment - he still wanted to go stand in solidarity with the water protectors. So that’s what they did.

“He thought that Standing Rock was like, a revolution, that it was time to do something. And he was absolutely right. He is right because it created this unity that no one’s ever seen before.”

Coming back from Standing Rock made Henderson want to do more. She put up a float in the Treaty 4 parade and titled it, “The Keepers of the Water” not knowing the name would stick and become a movement on its’ own. They now have a Facebook page and are planning more events in the future. They also did prayer ceremony at Echo Beach where they fasted and did a march through Fort Qu’Appelle. 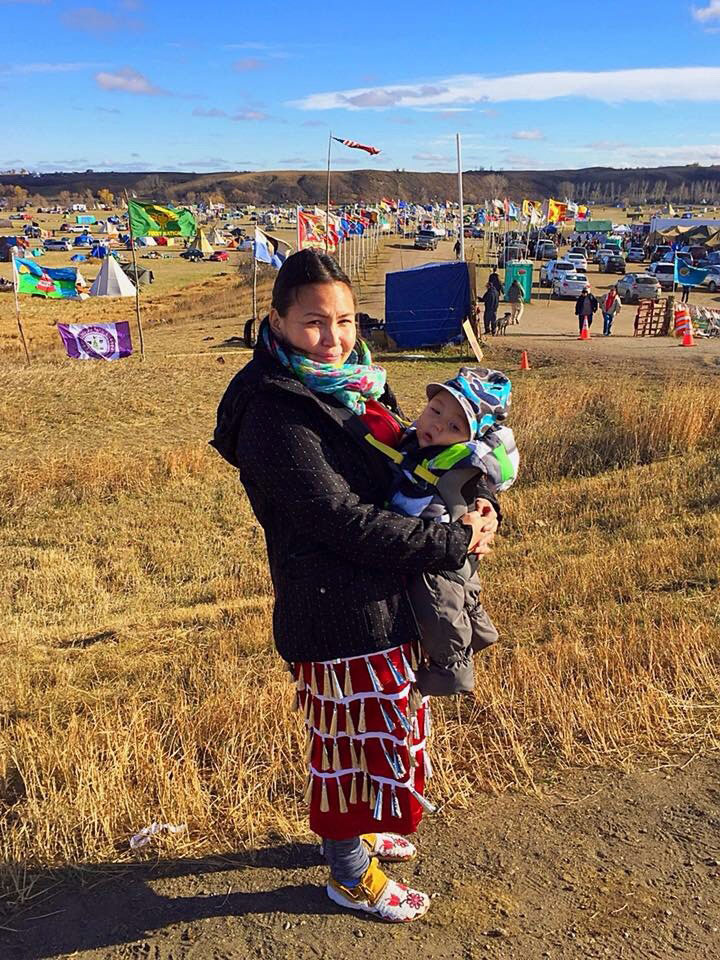 “I know we can’t stop like pipelines and the construction of it but we can raise that awareness to people that water is...vital. In our teachings - we learn that it’s a sacred medicine. It’s our first medicine right from birth to death.”

Henderson says the fight isn’t over and it’s important to keep raising awareness about the dangers of pipelines.

“Especially with the line three replacement pipeline that’s supposed to come through (Saskatchewan)...We’re going to keep at it with the local issues that are here.”

Going to Standing Rock for some was just a photo op. An integral part of history that some simply wanted to brag about on social media. But for people like Chasity Delorme, it was a spiritual calling, followed by hard and often unglamourous work dedicated to the greater good of the Oceti Sakowin Camp.

“You don’t need to be in the front lines (to be involved). There’s so many things to be done at camp like chopping wood, preparing meals, hauling garbage, helping the kitchens," Delorme said. 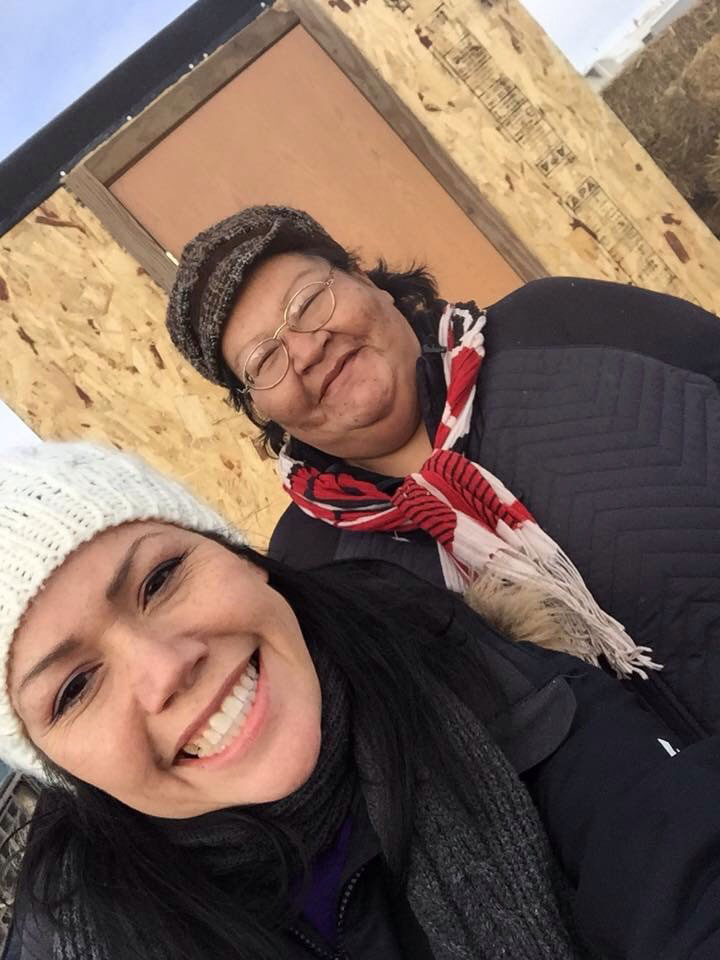 Before Delorme went to Standing Rock, she organized a solidarity event in downtown Regina. A prayer circle was held and 30 jingle dress dancers performed a healing dance for the water protectors.

“The purpose was definitely to focus on prayer. It was very important to me to ensure people knew it wasn’t a protest.”

After this solidarity event - Delorme made her trip to Standing Rock in the beginning of November. She was immediately welcomed into a makeshift kitchen run by a woman named Winona Kasto. She and Winona instantly connected.

“(Winona) talked about coming there with her tent and a vehicle - and that’s it. She knew that her gift was cooking and she wanted to be there to cook.”

Delorme says donations began to roll in to Winona's traditional cook shack after awhile, but winter was fast approaching and Delorme knew more had to be done to keep this kitchen going and to help keep people fed.

Delorme then had to travel to Ottawa in her role with the Canadian Federation of Students where she lobbied for support for Standing Rock. With the assistance of CFS and the Aboriginal Caucus - the students managed to raise $7000 to donate winter supplies for the camp - and Winona’s cook shack.

Delorme went back to Standing Rock to deliver the supplies and help winterize Winona’s kitchen. It was at that time that the announcement was made - the pipeline easement was denied. The news swept through camp but Delorme and others were cautiously celebratory. She says it was still important for her to continue to help residents like Winona who planned on attempting to continue to stand their ground at the camp.

“The camp is not going to go away until (DAPL) actually pick up and leave and that's the word that has to be spread.”

Jessica LaPlante was one of the approximately 10,000 people at Standing Rock when the easement denial announcement was made. She says it's an event she won’t soon forget.

She says the joy the water protectors felt was met with a sense of caution.

“It was an uneasy feeling because just like in any situation, Indigenous people - they don’t trust, you know, anything that the government might tell them… There was alot of speculation surrounding that.”

LaPlante has made multiple visits to the Oceti Sakowin camp since the summer, even braving the bitter cold in early December. She’s brought supplies and donations and has even brought her son along too. Traveling to Standing Rock was a calling she says she couldn't deny.

“The way that Morton County (Police) had been treating the people, and you know, how this pipeline would create and cause the desecration of sacred sites, burial grounds, you know? There’s so many underlying factors, broken treaties. It was something that we experience here in Saskatchewan, so I definitely felt the need to be there and support.“

LaPlante says the solidarity and care-taking she experienced there has changed her world view.

“I think we’re so conditioned to the society that we live in where there’s not so much regard for each other and it's more you know, ‘me’ centred.” 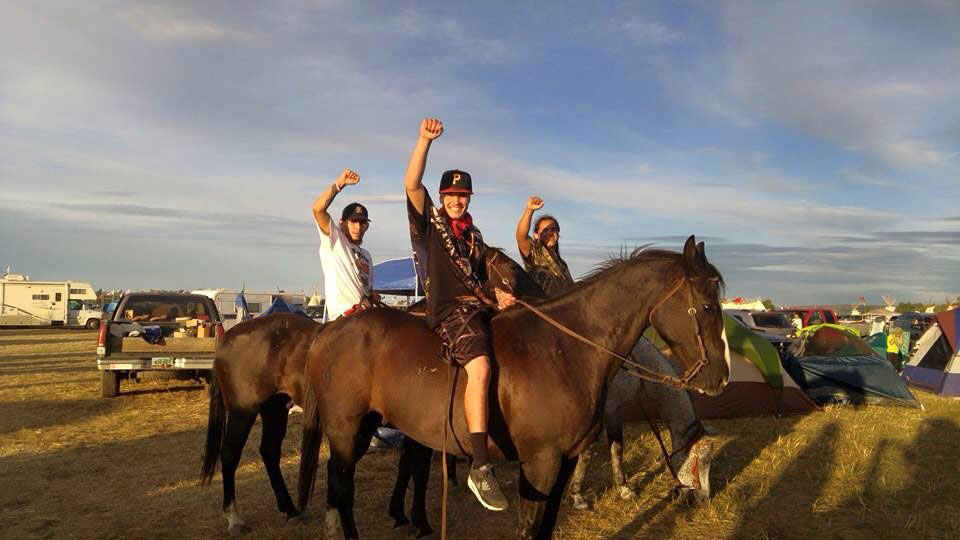 LaPlante vows to support the same fight against broken treaties and violations of human rights here in Saskatchewan, if and when it occurs. But she stresses she will do in a similar fashion as her neighbours down south have done.

“Learning in Standing Rock that - there is power in peace and coming together. This whole experience has connected me with people that I’ve learned so much from.”