Father and son sworn in at historic ceremony at Whitecap Dakota 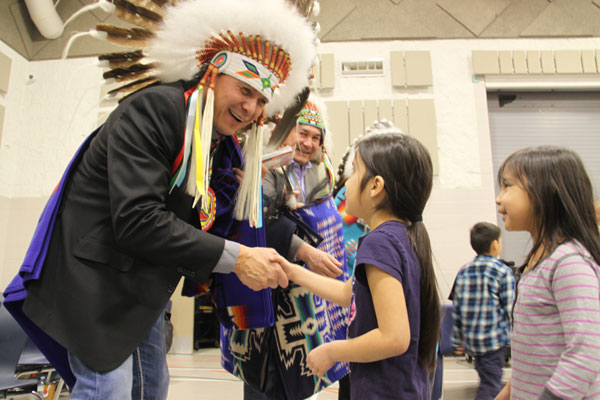 Election Day at the Whitecap Dakota First Nation. Even the children get excited about politics.

The buzz in the gym at the Charles Red Hawk Elementary School on the Whitecap Dakota First Nation was rising. The room quickly filled up with community members, dignitaries and students on hand to witness the historic swearing in of Chief and Council.

Chief Darcy Bear was elected by acclamation, which has almost become an automatic thing after eight terms as Chief with six elections by acclamation. Long serving Councillor Dwayne Eagle was also re-elected. New to the team this term is Councillor Dalyn Bear, who made history by joining his father Darcy as the first father and son combination in leadership at Whitecap Dakota. 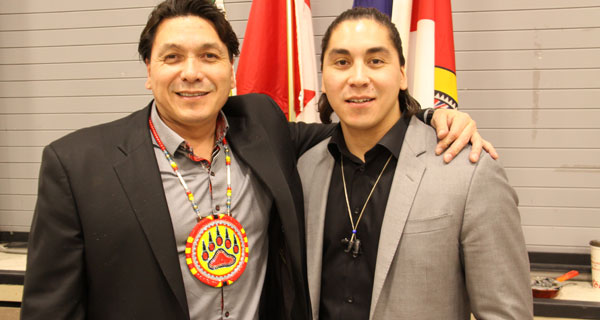 Chief Darcy Bear and his son, Dalyn Bear, who is now serving on Whitecap Dakota's council.

When Dalyn approached Chief Bear about running for council, the fatherly advice was pragmatic. “As parents we know our children have dreams and goals. And we have to believe in them. If that was the decision he wanted to make I told him to put some thought into it because you become responsible to all of our members. It’s not a small responsibility looking at improving the quality of life in our people,” said Chief Bear after the ceremony. “If you feel you are ready I’m not going to say you can or can’t. He had to make that decision. But I warned him you have to do the work as well. Meeting with our members and talking about his platform and how he can help the community. The rest is history. The membership elected him so now he has to do the work and prove himself.” 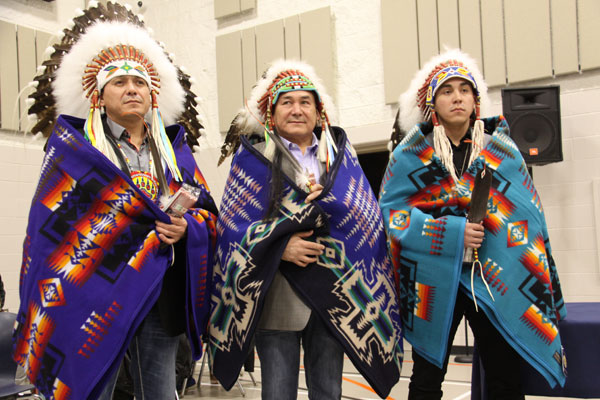 The gravitas was not lost on the younger Bear. He considers his dad his mentor and best friend and he has watched the progress he has made for his community. Dalyn has also worked for the community for the last six years as Director of Lands. His other training through SIIT, Thompson Rivers University and the University of Saskatchewan has set Dalyn up for the task of Council. “I was very humbled that the people of Whitecap elected me. Not every day that you get elected to leadership and I am a proud young man to take that office and work alongside my father who is my mentor and got me to where I am. My mom’s given me a lot of support as well,” said Dalyn Bear who added he was in awe when his bonnet was placed on his head at the swearing in. “Working for Whitecap for the last six years has given me great perspective. We want to develop partnerships and make a better life for our people.”

Things are going well at Whitecap and their list of achievements is lengthy. They are a regional force with over 650 people working in their community and have a casino and world class golf course drawing in over a million visitors a year. It wasn’t always like that though. “We always find a way forward in our community. I was raised in the community by my grandparents,” said Chief Bear as he reflected on the growth and progress in his community. “I remember hauling water and using out houses. Now we have all this infrastructure and homes that meet national building code with full basements and not crawl spaces. We have 160 units in the community and it continues to grow. Lots of our members want to come home. Going forward, we made access to the Building Canada Fund which was meant for municipalities not for First Nations. It took two years to do the lobbying so now we are putting out water sewer tenders next week. In many cases we find we can’t do it alone. It is going to take a partnership and working with other organizations and that may be with another First Nation or maybe another level of government or industry.” 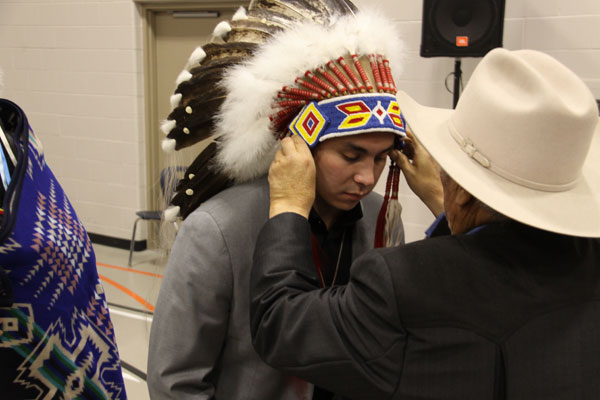 Councillor Dalyn Bear receives his bonnet after being elected in Whitecap's election.

Chief Bear’s responsibility to his community has rubbed off on his protégé. “We live and breathe Whitecap. It’s all about Whitecap,” said Dalyn of his relationship with his father and how they are going to work together. “Even when we sit down sometimes we are talking about different ideas and how to approach different levels of government and how we can bring opportunity to Whitecap. We have to get along, we understand that. We have a really good bond and relationship. My dad is my best friend and we have to make sure that we continue to work hard together and push forward for Whitecap.”