Entrepreneur aims to "Power Our Women" 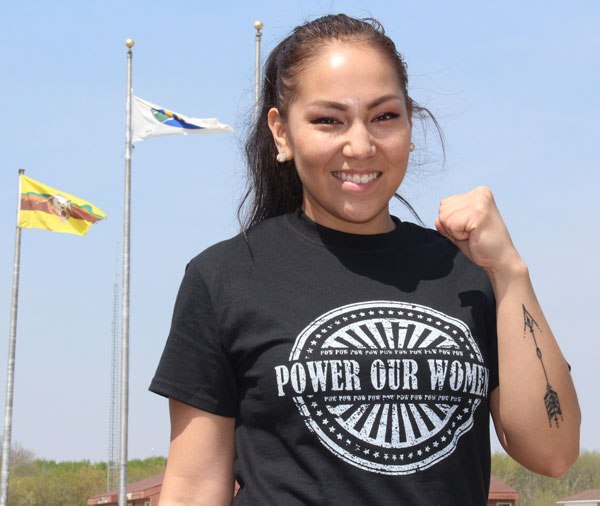 Entrepreneur and mixed martial artist Shana Pasapa is powering her way into the business world. Photo by Creeson Agecoutay

Shana Pasapa started a business last January called Power Our Women (POW). It’s a self-defence program for women and young girls, who want to power their defense, help instil confidence and attitude to women and girls.

“We expanded into offering a whole workshop. All the instructors are certified and have background in personal training,” says Pasapa. Whitebear First Nation but resides in Regina.

The business started off at the The Aboriginal Youth Idea Challenge (AYIC) in Saskatoon, which is a program that helps potential entrepreneurs to make their ideas real by helping to formulate business plans and finding resources. The business took off last January as self-defence classes but has expanded into offering workshops including fitness, nutrition, goal setting, healthy living, positive choices, self-defence and bully management. Shana offers self-defence classes in the basement of her home but her and her team travel throughout the province to provide classes and workshops to communities who inquire.

Shana believes it’s a tool that all women should have to learn what your body is capable of doing.

“It’s a power that I’ve learned through martial arts and it has helped me to become a better person and a fighter but I feel like it’s something that can be shared with other women to reignite that power within ourselves,” she explains. “We need to bring more awareness to some of the issues that are going on right now and this is a good way to bring more awareness.”

POW added a new seminar from striking and anti-abduction, which has been described as being very helpful.

“We help women and girls be aware of the situation of being abducted. Then we put them in reality training by simulating them in that situation. We give them the tools of different things they can do in those scenarios,” she says.

The POW team show their participants different strategy tools that will help in crisis situations such as if somebody were to grab you from behind upon entering into a vehicle. The POW instructors show which direction to run and to be aware of things in your vehicle that may help. Shana says some people get emotional because they experience certain situations but feels a sense of relief when they are given an opportunity to defend themselves.

“I’m working with a girl right now who is scared to go out in public because of a situation she had before and helping her to gain the confidence and to realize what she’s capable of. To hear that she has a little bit of confidence to do those things is real rewarding,” she adds.

Shana would love to see more women going into martial arts because it’s something that she says, you don’t see often.

“If anyone sees me walking down the street, they wouldn’t expect I can defend myself very well because I’m a shorter woman and I don’t even look like I’m a fighter, I know I’m able to handle myself.”

For those interested in signing up for self-defence classes and/or workshops, Shana can be reached at powerourwomen@gmail.com or you can find her business on their Facebook page: Power Our Women.