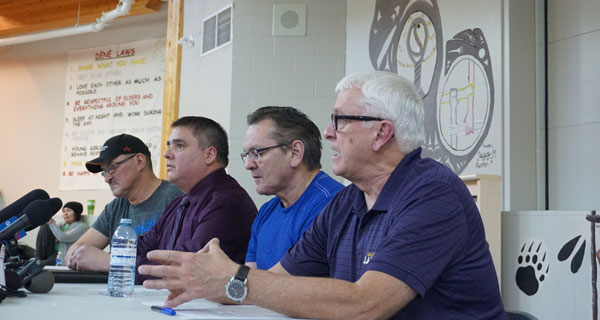 La Loche welcomed the media this week to discuss how the community is still recovering from the school shooting that claimed four lives last year – a tragedy that shook the nation. The community is just starting to heal and a lack of resources is slowing any progress.

“We feel like we’ve been left alone and we’ve been abandoned. I can honestly say that on behalf of the staff, students and probably parents,” says Greg Hatch, the acting Principal of the La Loche Community School. “We still haven’t dealt with trauma, we’re working on a plan at the present time but we’re almost a year later and we’re starting to look at how we’re going to address trauma and a healing plan.”

La Loche Mayor Robert St. Pierre announced the council of the Northern Village of La Loche has declared January 22 a civic day of remembrance. He has also touched upon the community’s recovering progress since the tragedy.

“January 22, 2016 was indeed La Loche’s darkest hour. Much progress has been made. However, our journey towards convalescence has just begun,” said St. Pierre in a press conference live streamed on CBC. “There is much more that is needed to ensure that our community is healing and that required services are available to years to come.”

Following the tragedy, a committee of provincial, federal representatives and health staff was established to find answers to too many unanswered questions. They found that services were still much needed in order for the community to heal.

The mayor highlighted required services such as an increase in overall mental health services to provide to the community with a mental health coordinator and a psychiatric nurse, the hiring of two community safety consultants to begin working with the community to develop an official community wellness plan and the need of a memorial site in honour of two brothers Drayden and Dayne Fontaine, teacher assistant Marie Janvier, and teacher Adam Wood – all who were shot and killed by a 17-year-old teenage boy, who cannot be named according to the Youth Criminal Justice Act. 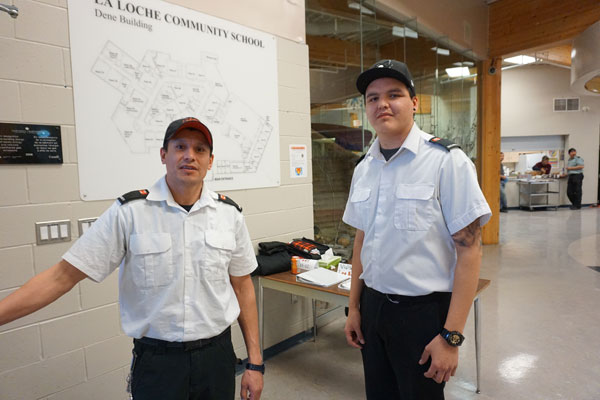 Colin Herman and Braden Herman work security between 8 a.m. and 4 p.m. at the La Loche Community School's Dene Building. Along with the hiring of an on-site RCMP officer, their jobs are among steps taken to make students feel safe at school. Photo by Chelsea Laskowski

The community is still struggling and in need of support and St. Pierre describes a long road of recovery ahead of them. In the press conference he assured the staff and students of the school that they will do everything in their power to ensure everyone is on the proper path of healing.

“We came together; we supported each other, loved each other, and showed the world the true meaning of community and resiliency,” St. Pierre adds.

As the anniversary of January 22 quickly approaches, the leadership committee has asked the media to respect their wishes to privacy on this day of observance which will consist of a church service, community lunch and a candle-light vigil.