The newly elected Chief and Council of Waterhen Lake First Nation are encouraging their citizens to live a healthy lifestyle. In order to back up their words, they all agreed to drug and alcohol testing once they were sworn in on February 7th. 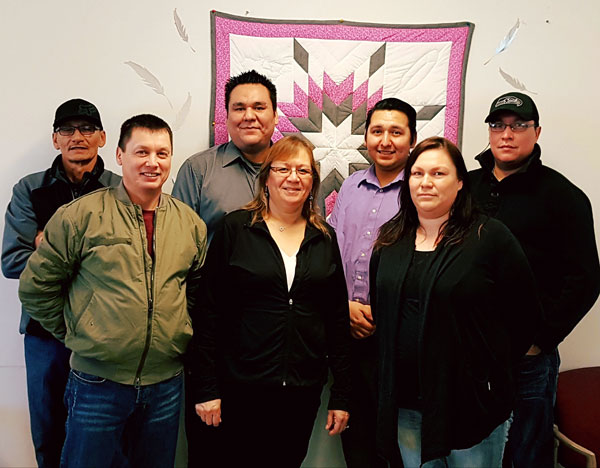 At the swearing in ceremony, the leaders were presented with an eagle feather with a certificate stating that they swear they will be the best role models for their community. Following the ceremony, the Chief and Council performed a drug and alcohol test.

“The elder himself asked us [Chief and Council] do we solemnly swear as leaders that we will act to the best of our ability to be accountable to our community members,” says Chief Roy. “[This will] officially state to the general public that we are here as their servants to lead our community on a good path.”

“We need to be those role models for our community, our program directors, and our employees and for our business sector,” she adds. “For example, if you’re working for the health department, you need to be alcohol and drug-free for the well-being of our people.”

The newly elected Chief and Council’s first day in the office was on January 5th where Chief Roy initiated the idea of the drug and alcohol testing idea with all the councillors unanimously agreeing to it. The responses that Chief Roy has received from the community are positive where members believe it is important to have in a role of leadership. The alcohol and drug testing will not happen immediately to the band staff members but it will take time to implement the initiative.

“We’re paving paths that nobody has ever witnessed before,” she says.

Councillor Dustin Ross Fiddler thinks the alcohol and drug testing is a great idea for his community that strives to be a clean and healthy reserve.

“I hope it will promote that healthy leadership is successful leadership being clean and sober,” he says. “We would like to put that out to other First Nations as well. We’re not saying they have to be this way, but show that example and set the best foot forward especially when you have youth looking up to you.”