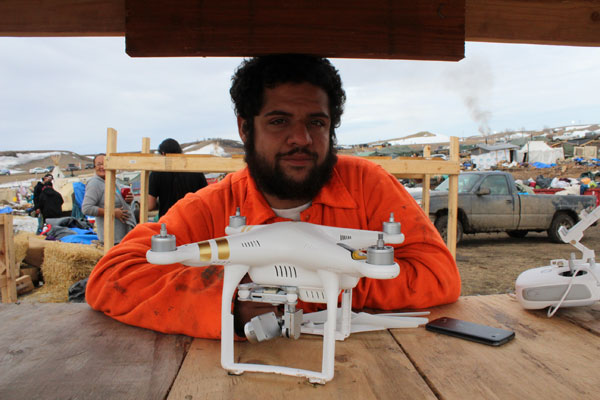 Kurthland Madrigal-Alcaraz setting up a drone at the Oceti Sakowin camp. Photos by Jeanelle Mandes

Kurthland Madrigal-Alcaraz will always remember the Oceti Sakowin camp as his home. He’s been part of the No Dakota Access Pipeline (DAPL) protest for three months on the Standing Rock Sioux reservation in North Dakota.

The Oceti Sakowin Camp was also a place of spiritual connection, a family-orientated community, a place of unity with peaceful and unarmed water protectors.

“The camp may not have evolved but it evolved all of us into leaders and warriors especially those are standing strong in the final stand,” he says.

Originally from New Mexico but lives in Las Vegas, Madrigal-Alcaraz will continue to remember his experience at the camp – some good and some bad. On January 18th he was one of many water protectors who were attacked at the front lines and shot with rubber bullets.

“Not only did I get hit with a rubber bullet but I got brutalized by two police officers from Bismarck or Morton county,” he says. “I was expecting it because I know how they are.”

Madrigal-Alcaraz described the vibe at the camp the day before eviction day as uncertainty of whether to stay or leave.

“Their heart wants to stay but the mind tells them it may not be worth a felony arrest or anything like that,” he says. “We’re all a tough choice for those that do decided to get arrested and the veterans who put their honour on the frontline, we thank them.” 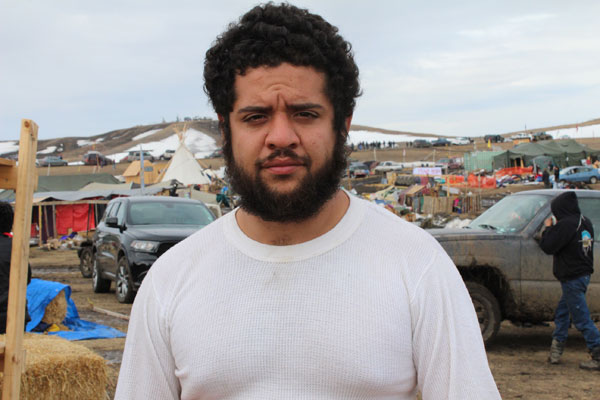 The Oceti Sakowin camp was Madrigal-Alcaraz's home for three months.

Madrigal-Alcaraz was preparing his friend’s drone that they planned on using on eviction day. Although he wasn’t inside the Oceti Sakowin Camp when 2 o’clock approached, he wanted a way to stay communicated with the other water protectors who decided to stay after the deadline.

“The drone was in hopes of getting it up there because I’m going to leave so I’m going to be up here one way or another with my brothers and sisters,” he says.

That same evening Madrigal-Alcaraz sat in the back lobby at the Prairie Knights Casino in Fort Yates and witnessed a water protector/veteran being tasered by police. Not long after, he was spotted in the building by police and hotel security and was asked to leave the premises for videotaping the incident. His video went viral on social media with over 60,000 hits.

Even though the Oceti Sakowin camp was surrounded by law enforcement monitoring over the hills looking inward on the camp with lamps blaring all around, the camp will always be remembered by all water and land protectors and visitors as a place of unity in singing, praying, ceremonies and continuous war cries and chanting Mni Wiconi which is Lakota for Water is Life – a chant that will forever be embedded in their hearts.

“Standing Rock was just the beginning for us Oceti warriors and survivors. We are the remaining embers of our sacred fire and now we will spread all over the world and ignite sacred awakening fires all around,” Madrigal-Alcaraz wrote in a recent Facebook post.