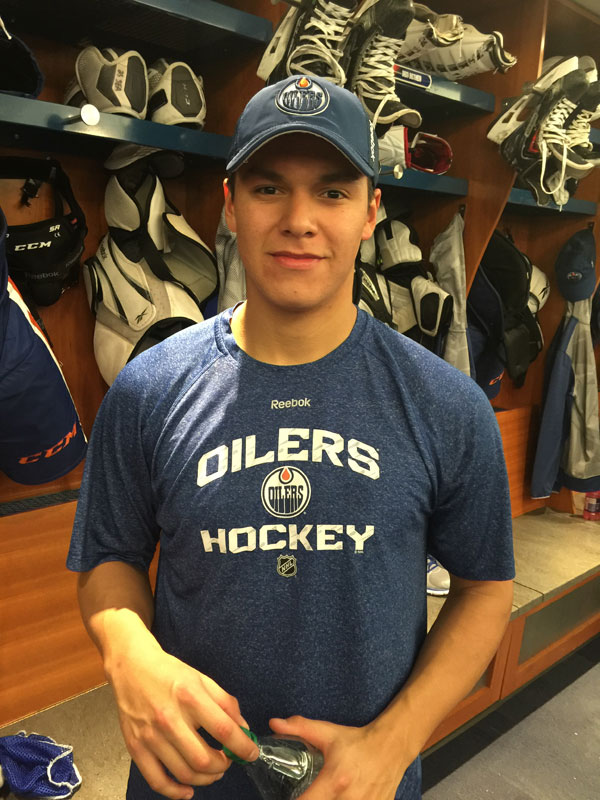 While many were skeptical if Ethan Bear fluked out a great 2015-16 WHL season with the Seattle Thunderbirds as he amassed 19 goals, 46 assists for a total of 65 points in 69 games, the 2016-17 season was even better for the Edmonton Oilers prospect.

Today, many are eating their words as Bear is thriving again in the WHL. In 67 games this season, Bear has 28 goals, 42assists for 70 points, and making many believe that he is the next on the d-line for Edmonton Oilers. He is also a plus-34 and has taken steps to revamp his defensive game. His season left the league no choice but to name him the Western Conference Defenseman of the Year.

The Oilers need a puck-moving right-handed defender, and Bear can take on that spot in time. He is on track to develop into an outstanding top-four blueliner. Bear has edge in his game and is excellent on the backend. He can block shots and serve as an asset on special teams, and he also makes the most of physicality even though he is only 5-foot-11, 198 pounds.

“I know I’m capable of making the team, all I have to do is to implement the skills that I’ve learned from attending Oilers Prospects Camp,” says Ethan Bear. “The guys on the team have been quite helpful and the veterans give advice that I can utilize with how I play the game,” added Bear.

In 2016-17, Bear not only has added a new dimension to his offensive game over time; but he is shooting the puck more and scoring more goals. The only minor thing lacking in Bear’s game is his size, which could hinder his potential. However, he is still growing and transforming his game and is starting to be the defenceman the Oilers need to ensure a greater success in the post-season.

How did Bear’s career sky-rocket so fast? In 2011-12: Ethan Bear skated for the Pursuit of Excellence bantam team in British Columbia and was selected by Seattle in the second round (25th overall) in the 2012 WHL bantam draft.

In 2012-13, Ochapowace First Nation member Bear made his WHL debut, skating in one game for Seattle in March following his midget season with the Yorkton Harvest in Saskatchewan. In 38 regular season games for Yorkton Ethan scored 7 goals with 28 assists and 30 penalty minutes. Bear scored 1 goal with 1 assist in the five-game SMHL quarterfinal series against the Regina Pat Canadians and also played for the bronze medal-winning Team Saskatchewan U16 team at the Western Canada Challenge Cup.

Moving full-steam ahead to 2013-14, Bear skated in 58 regular season contests and nine playoff games for the Seattle Thunderbirds in his first WHL season and was a team captain for Canada Western at the 2014 U17 World Hockey Challenge. He scored 6 goals with 13 assists and was +1 with 18 penalty minutes in the regular season. Seattle finished second in the U.S. Division and reached the second round in the playoffs. Bear scored 2 goals with 2 assists and was an even plus/minus with 6 penalty minutes in nine playoff games. He had 1 assist in five games for Canada Western at the WHC.

In 2014-15, Bear skated for Canada’s gold medal-winning U18 team at the Ivan Hlinka Memorial Tournament in August before returning to Seattle for his second season. He re-joined the Canada U18 team following the WHL playoffs, winning a bronze medal at the 2015 World Juniors. Bear scored 13 goals with 25 assists and was +1 with 23 penalty minutes in 69 regular season games for the Thunderbirds. Seattle finished third in the U.S. Division, falling to Portland in a first-round playoff series. Bear scored 1 goal with 2 assists and was -8 with no penalties in six playoff games. He scored 1 goal with 1 assist and was +7 with 2 penalty minutes in five games for Canada at the Ivan Hlinka tournament and was +7 with 3 assists and 6 penalty minutes in seven games at the WJC. Canada defeated host Switzerland in the bronze medal game.

As Ethan Bear was making himself quite the household name across Canada, scouts were starting to take notice that they make have to a more serious look at the potential of a highly respectful young man. Bear was ranked 97th amongst North American skaters in the Central Scouting final rankings and was invited to the NHL Prospects Combine. He was selected by the Edmonton Oilers in the fifth round (124th overall) in the 2015 NHL Draft.

Bear is a short but compact skating defender who can move the puck. A playmaker who can generate scoring chances, he can also get the puck to the net from the point. Despite his lack of stature he has the stamina to play a lot of minutes on a nightly basis. He does not run around looking for hits but does not shy away from contact and will use his body when necessary.

Bear attended his first NHL training camp with Edmonton and has blossomed as a top pairing defenseman for the Seattle Thunderbirds in his third WHL season. Playing in all situations for the Thunderbirds in 2015-16, he has logged large amounts of ice time and is among the team leaders in assists and points. Bear is still developing both physically and in terms of his tactical game. His play to this point has been impressive and he has the makings of being a late-round steal.

“My game has certainly improved since attending the Oilers camp,” says Bear. “It’s a much faster game than the WHL for sure but I’m adjusting in making those changes into my game.”

Ethan Bears’ future bright as he will be a regular NHL defenceman with the Edmonton Oilers in the near future.