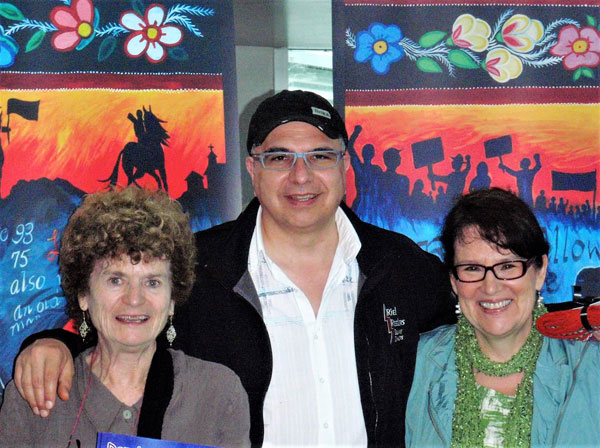 Who doesn’t love a good story? For Wilfred Burton, storytelling has been a rich tapestry that has woven throughout his life linking Métis culture, family history and a lifelong career path.

“I grew up with a wonderfully vast number of stories being told, usually by my mother, about my family, our community and it created in me a great desire to tell stories as well.”

Wilfred recalls the uncensored way in which his mother would share stories about relatives like Edward Beaupre, the Willow Bunch Giant and his time in the World’s Fair. There were tales about Louis Riel and the connection between his family and theirs. Not to mention the immaculate cure of Charles Nolin’s first wife and the shrine at St. Laurent. The telling and retelling of these stories became the way in which the family history would come to life and dance around in all their vibrancy linking the present and the past, and instilling in Wilfred a great pride for his history and culture.

“I have always been a storyteller, even as a young child.”

Wilfred’s professional career took him into the field of education and his love for story telling quickly became a tool to teach children how to read. I would actually rewrite stories for the kids by taking an article from the local newspaper and write it at the level that the kids could read it.” He began creating writer’s workshops and these became the highlight of the school year for the kids. “I would have the kids rewrite stories, put them together, laminate them and have them in the classroom. At the end of the year, each kid got to take home a class story.”

This year marks the tenth anniversary of Wilfred’s first co-published children’s book Fiddle Dancer. Working with Anne Patton, Wilfred wanted to make sure there was Métis context and appropriate cultural nuance to the story. “There was a huge gap in Métis children’s literature.” Wilfred knew that imagery would be really important to portray the movement and cultural connections in the story. He requested the artistic talent of Sherry Farrel Racette, and she jumped at the chance to illustrate. Fiddle Dancer is now in its fifth print edition and was the catalyst to Wilfred’s evolution into authorship.

A trilogy of stories developed about main character “Nolin” including Dancing in My Bones, and Call of the Fiddle which is the only children’s book printed that mentions Back to Batoche Days. He holds true to his dedication of capturing the spirit and culture of Métis people. “The characters themselves, I have fashioned from people I know. I wanted them to be humble, community minded, with strong work ethic and good traditional Métis values and virtues. I also wanted kids to see Nolin try his best and not win.” In the end he goes and shakes other kid’s hands. He takes away learning, and the commitment to try again.”

Kids identify with the books. “When I write it’s a good story to tell. The benefit is usually realized later.” Wilfred recalls a time when he was reading one of his books to a classroom of children. “There was a little kid, one in a class full of children. She had never spoken a single word in the classroom. When I finished reading, the girl put up her hand and said, “I have a Kookum too.” “It was a powerful moment seeing the connection she had made to a word.” He has noticed the same thing happens with an action. “I did a book reading at a suburban middle class school and after taught a quick jigging lesson to the kids. It was winter. When they went out to play for recess, they all had their scarves tied around their waists saying “I’m Métis, I’m Métis” all happily jigging outside. I love that image – for them it was entertainment – but they remember the positive image of Métis people. I have a firm belief that you can’t teach only negative things about a culture. It’s important to teach the truth, but it has to be interspersed with the positive. This is a way to create a positive outlook about that culture.”

Other books written by Wilfred include Roogaroo Mickey and most recently Road Allowance Kitten,which was nominated for the Rasmussen, Rasmussen & Charowsky Indigenous Peoples’ Writing Award.