(Treaty 6 Territory, Saskatoon, SK) — The Federation of Sovereign Indigenous Nations Executive and the town of Elbow are encouraging Saskatchewan’s municipalities to continue the journey to reconciliation.

To lead the way, the FSIN and the town of Elbow signed an agreement committed to eliminating racism by providing educational initiatives for the staff and elected officials of the municipality. Topics will include history of Treaty, Residential Schools and colonialism, and the Treaty and inherent rights of Indigenous people.

Elbow Mayor Rob Hundeby and FSIN Chief Bobby Cameron met with an interest in working together at the Saskatchewan Urban Municipalities Association convention in February after Cameron’s speech highlighting reconciliation. 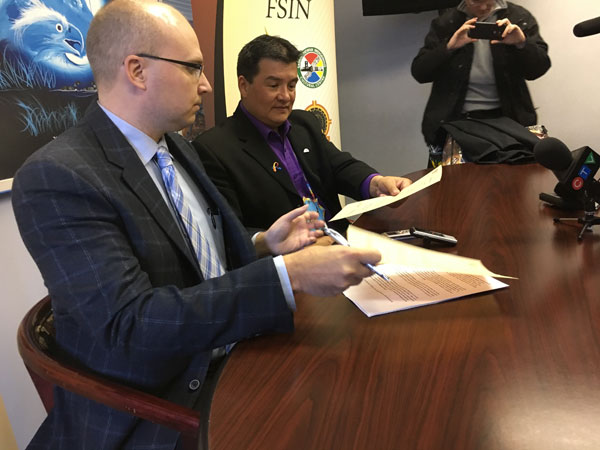 “I was overcome with the way I thought in the past. It was wrong,” said Hundeby. “Growing up in rural Saskatchewan, there’s a lot of influences that you’re surrounded with, and you don’t always think too deeply about the values you internalize. I was a racist – I had racist thoughts and used to participate in off color jokes. I used to believe all the stereotypes: First Nations people are lazy; they don’t pay taxes, you name it. I asked for Chief Cameron to forgive me.”

Hundeby says he is making sure his children aren’t brought up with the same beliefs and encourages them to follow his Christian walk.

“I teach them we are all equal and deserve love, respect and kindness,” he said. “Asking for forgiveness and accepting forgiveness is the only way true reconciliation can happen. We can all change. Let’s educate and create awareness. The town of Elbow encourages all members of SUMA and SARM to work with First Nations people and their organizations to forge these positive, life-changing relationships.”

Racism is a learned behaviour, and it can be unlearned. We need to start with this education from childhood to adulthood, says Chief Cameron.

“Indigenous people have the right to be free from discrimination in the practice of our traditions and culture, this is internationally recognized by the United Nations Declaration on the Rights of Indigenous Peoples. We live here together on our Treaty and ancestral lands. We raise children together, and we’re called upon by the Treaties to work together for the peace and prosperity of everyone. The FSIN and its institutions are more than capable of providing education through our shared knowledge. There are no better experts than First Nations people themselves, our elders, leaders and youth,” said Chief Cameron.

“I encourage each and every municipality to join the FSIN in this initiative, in the spirit of forgiveness, reconciliation and friendship, to leave a foundation on these values for our future generations.” said Hundeby.