Dealing with the northern suicide crisis is just one of the issues Saskatchewan's Child Advocate hopes to tackle in his upcoming term.

The new Saskatchewan Advocate for Children and Youth released his first Annual Report earlier this week at the Legislative Assembly. Corey O’Soup highlighted his vision for this term, which began November 2016. He hopes to be the voice for children and youth in Saskatchewan.

“I believe in an approach that fosters positive relationship, collaboration and engagement with First Nations and Metis government, agencies, and communities to achieve better outcomes for these children,” said the former educator in a media release. “I want to be on the ground, listening to our youth, to assist them in obtaining the positive changes they seek for their future.” 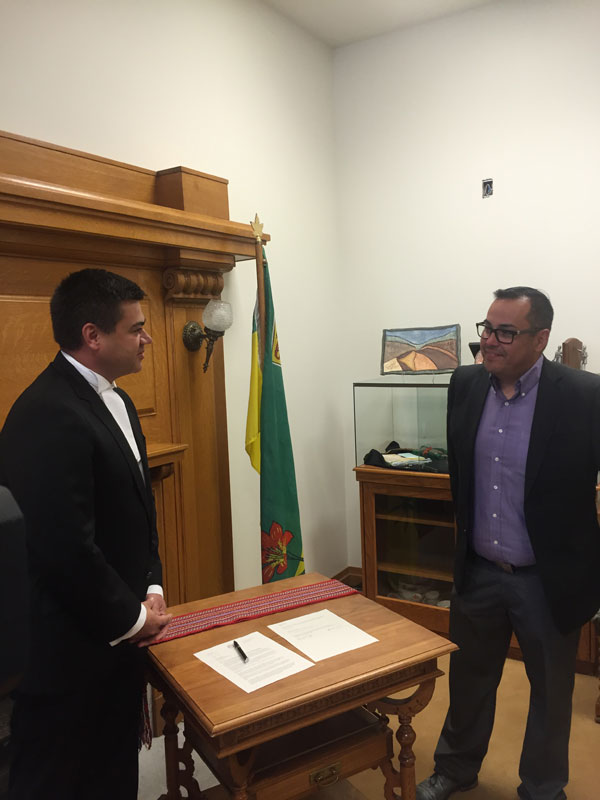 Children's Advocate Corey O'Soup with then Speaker of the House Cory Tochor in August 2016, when it was announced O'Soup would take over the position from Bob Pringle. Stock photo

In the recent report, O’Soup lists issues that he will continue to fight for when it comes to services in remote and rural regions, lack of supports in reserve schools, and on- and off-reserve funding for child welfare and education.

“The disparity in funding between on and off reserve education is unacceptable,” he said. “We must work together to address the lack of resources and to tackle the disparity in graduation rates between our First Nations and Metis students.”

In the report, O’soup acknowledged what he called the “outstanding work” of former Advocate Bob Pringle, who served the province from 2011-2016. During Pringle’s time as Advocate, he released seven special reports and tabled six annual reports. Pringle also investigated tragic deaths of children and youth within the province and provided recommendations.

“Mr. Pringle’s passion and dedication to children and youth was not only evident throughout his term, but also reflected in this report encompassing his work as Advocate to October 31, 2016,” said O’Soup in the report.

O’Soup noted he will releasing a detailed report on the province’s suicide crisis later this year in response to the northern Saskatchewan suicides late last year. This report will have recommendations for the government on addressing this issue and moving forward in a proactive way.

“The issue of youth suicide is not found just in the north, but across Saskatchewan and Canada. We need to do more than simply respond to a crisis. We need to work together to find long-term sustainable solutions,” said O’Soup in the report.