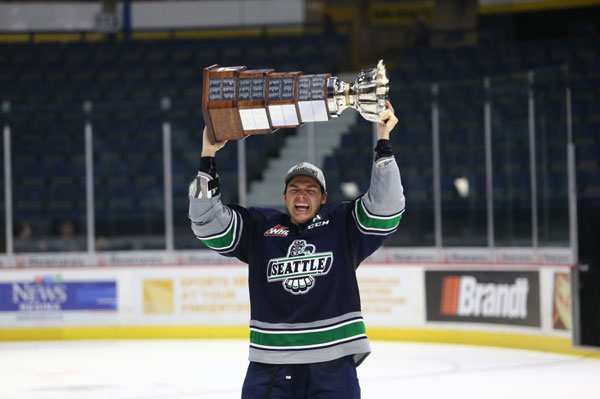 Ethan Bear, the pride of Ochapowace First Nation, just helped lead the Seattle Thunderbirds to their first-ever Western Hockey League (WHL) Championship in 40 years. The Thunderbirds defeated the Regina Pats 4-3 in overtime at the Brandt Centre to claim the championship in 6 games. The 19-year-old Bear finished the six-game series with a goal and 10 points and came back from a hand injury to lead his team to the league championship. The blueliner continues to prove his worth through each game and is flourishing into one of the Oilers’ top prospects.

In addition to leading his team to a championship, Bear led all WHL defenseman in scoring this postseason with six goals and 26 points. He also finished fourth in scoring among all playoff skaters. In the regular season, Bear finished third among all defenders with 28 goals and 70 points through 67 games.

Ethan Bear could join the team in the offseason for development camp again and is likely to start the season in Oilers training camp. There, he will battle for a spot on the opening night roster which is a strong possibility for Bear.

Although Bear may be NHL ready and can be more solid than what we’ve seen with some of the Oilers defence this past season, it is not a demotion but another season to fine tune his solid skills in the American Hockey League (AHL) with the Bakersfield Condors.

Bear knows there is still a long road ahead of him to play for the Edmonton Oilers who are still in search of an established veteran puck-moving defenseman. The young defenseman does not take this journey to the NHL too lightly. Bear is motivated to continue working on his game and no doubt has shown that during the regular season where he was awarded the ‘defenseman of the year.’

"I'm really passionate about the sport and I really love hockey and I use every chance I get to get better every day," he said. "I really tried to use my time to improve and not take anything for granted."

With all the great support he has been receiving in Ochapowace First Nation and all of Saskatchewan, Bear could barely contain his excitement after the championship win as he showed much joy that sparked the Brandt Centre in Regina. Bear skated around the ice with the Ed Chynoweth Cup and acknowledging his family and friends who travelled to Regina to watch him win the championship.

“It’s amazing to look at all my family and friends, and you know I’m not the only guy from Saskatchewan so I bet they feel the same and it just couldn’t be any better,” says Bear who had two other teammates from the Province of Saskatchewan.

Bear added, “seeing all the crowd we had, it felt like home ice and without them, I don’t think we could have done it.”

A proud moment for Ethan Bear to enjoy with family in Ochapowace but the season for the Thunderbirds is not over as they are now representing the Western Hockey League, at the 2017 Mastercard Memorial Cup, which will be hosted in Windsor, Ont. from May 18 to 28.