A new bridge comes with a flurry of activities, most of which involve large equipment, coordination of plans and schedules, and lots of detailed processes. The idea, to connect two areas of land, is to make transportation smoother as Saskatoon continues to grow.

Naming a new bridge is the kind of thing that connects more than land. It can be an opportunity to connect cultures. That is the exciting reality for the North Commuter Bridge project. A naming committee recently toured the project to put their feet on the land and spark the creativity that will go into choosing a name fitting of Saskatoon’s newest transportation corridor. 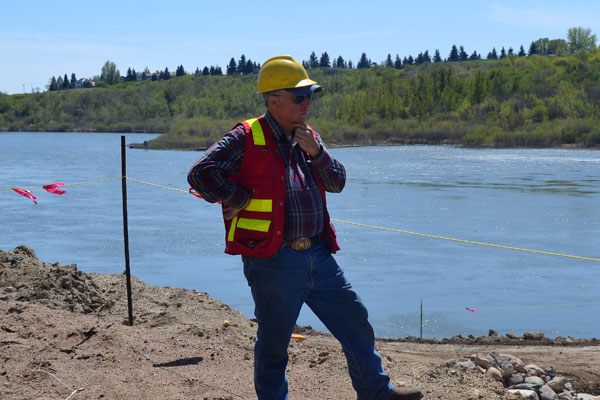 Ernie Walker explains the area and its history.

That is not to say that the naming activity itself doesn’t require tremendous planning and process as well. Spearheaded by City of Saskatoon Director of Aboriginal Relations Gilles Dorval, a Bridge Naming Engagement Process was developed in consideration of the Truth and Reconciliation (TRC) Calls to Action, specifically #79: ‘Participate in a strategy to commemorate Aboriginal peoples’ history and contributions to Canada.’

City Administration undertook an initial meeting with key community members, including representatives from the Office of the Treaty Commissioner (OTC); Saskatoon Tribal Council (STC); Central Urban Métis Federation Incorporated (CUMFI;) and the Federation of Sovereign Indigenous Nations (FSIN) to discuss a process for engaging the community to name the North Commuter Parkway Bridge and the scope of the project. At the meeting, it was expressed that the bridge naming process should be community driven and that this is an opportunity to open doors for people to have a dialogue and build community through the reconciliation process.

Gilles Dorval is working hard to engage a number of community stakeholders to ensure that an inclusive process unfolds. “We have been following traditional protocol with guidance from our Elders as well as honoring the Indian Residential school survivors throughout our reconciliation Journey as a community,” said Dorvall.

During a tour of the bridge construction site, archaeologist Dr. Ernie Walker addressed the committee to talk about the area and shed some light on things to consider when deciding on a name. “This is an opportunity to celebrate the northern plains people.” He offered an example of how Tipperary Creek was renamed at Wanuskewin. “Hilliard McNab was from George Gordon First Nation. He was instrumental in the early days of Wanuskewin. We wanted to recognize his contributions and decided to do so by using his traditional name Opimihaw.”

Opimihaw Creek is now a formally recognized Canadian topographic name. “I have admired what Calgary did with Deerfoot Trail, and this is an opportunity to take a significant step in the right direction. Where else should this happen than in a place named Saskatoon, Saskatchewan,” asked Dr. Walker. 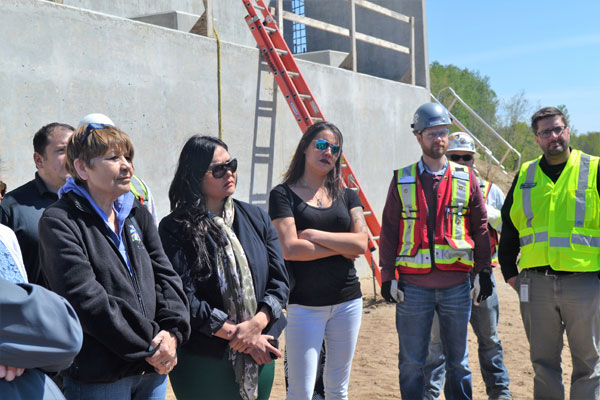 The committee will meet frequently now to adopt a campaign name and agree to a set of criteria that will spell out the who, what, where, when, and how of the naming process.

Executive Director for the Office of the Treaty Commissioner Harry Lafond is taking part as a member of the naming committee. “I really appreciated the opportunity to tour the site and hear the stories about the area and history from Ernie. This process gives the community the chance to express what is important to them,” said Lafond. “The naming process that the City of Saskatoon has adopted is an important indication that we are moving down the reconciliation path. It speaks to the commitment of extending ownership to the people who live in and around our community, it belongs to the people.”

Once completed the new bridge will link the Marquis Industrial Area with Saskatoon’s northeast residential developments across the South Saskatchewan River, reduce traffic on existing bridges and increase economic productivity in the City’s North Industrial Area.