It's been a busy couple of months; in Montreal Lake Cree Nation for a week of Functional Fitness with the school and community; Black Lake First Nation for a Aboriginal Fitness Leader Prep;  Askiy Run Club did a 5km run; finally the St.Mary’s Wolfpack crew completed their triathlon programming with the Kids of Steel triathlon in Saskatoon.  End of June is here and summer programming is still rolling out, looking forward to returning at Stanley Mission First Nation; and Muskeg Lake Cree Nation. 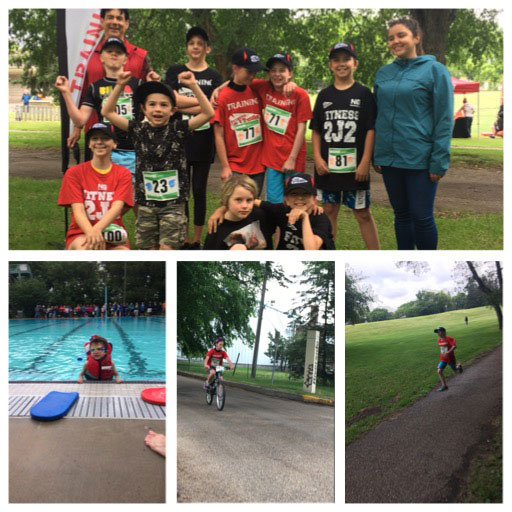 I received a question about running and training for long runs. The question had to do with recovery after hard training sessions, should they use foam rollers? And how to use them? Most of us have experienced a time or two the dreaded DOMS (Delayed onset muscle soreness) I know I have.  Now let's be fair: a long run for some could be a 5km or others a half marathon to full marathon.  The distance is not really the point, it’s the recovery of the major muscles in the legs (Quads, Hammy’s, Glutes). Secondary are the calf muscles (soleus and the gastrocnemius) after intense training.

Foam rolling simulates a deep tissue massage by working out the tension in your muscles, and by providing a release for the outer sack of the muscles (fascia). Foam Rolling is also called self-myofascial release (or SMR).

Not always relaxing, as those who have ever received a deep tissue massage know. If you have never tried foam rolling before, or haven’t done so in a while, there’s a chance that it can be a bit painful in order to get your muscles to release.   Here’s the good part, it gets less painful and even easier over time.  With consistent use of a foam roller you can easily reduce pains and aches, prevent injury, decrease muscle soreness, and give the muscles the desired release before and after you go for a run.

How To Foam Roll

So here’s the deal, when you’re ready to foam roll, go over the area approximately 1 inch per second.  Rolling over the muscle at such a slow pace is done to identify the areas of the muscle that are most sensitive and tender.  Choose 2 to 3 areas per muscle that you can apply pressure on for 20-30 seconds ensuring proper release. You need to make sure you are able to hold that pressure for the entire duration; otherwise it will not be effective.

Fitness 2J2 is a socially responsible community based health and wellness company. Contributing to the success and vitality of our communities, promoting healthy and positive lifestyles for Indigenous people of all ages and abilities.  STRONG HEALTHY PROUD