When Modeste McKenzie sat down with Canadian senators on Parliament Hill on June 7, he was quick with a joke.

McKenzie, whose presentation followed that of a young woman who sang in her Mi’kmaq language, said, “That is a hard act to follow but I am a dancer and I will gladly hop on this table and do a jig for you if you want.” 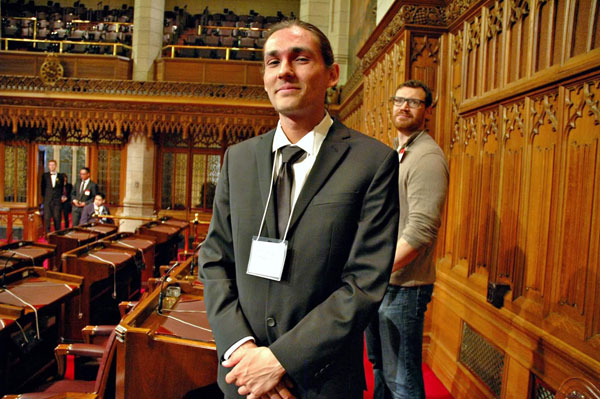 In his testimony in front of Canadian senators in Ottawa, Modeste McKenzie talked about his Métis culture and the importance of equal access to education for students on reserve. McKenzie is a youth support worker for Lac La Ronge Indian Band and was chosen to participate in Indigenous Youth Leaders at the Senate. Photo courtesy of Modeste McKenzie

McKenzie, 22, who is Dene Métis and lives in La Ronge, was one of 10 youth leaders picked from 100 nominees across the country to participate in an event called Indigenous Youth Leaders at the Senate in Ottawa.

“I did a fist pump in the air,” McKenzie said. “It was pure excitement.”

The Senate’s Standing Committee on Aboriginal Peoples gathered together youth leaders who are working for change in their communities. The event not only marked the 150th year of confederation, but contributed to the committee’s study on how to improve relations between Indigenous and non-Indigenous peoples in Canada.

After a day of informal meetings with senators and a workshop with new Canadians and high-school students, McKenzie and the other leaders took turns sharing their stories in front of the committee.

McKenzie spoke about the importance of his Métis culture, which he embraced after he moved from La Ronge to Rosthern so his mother could work at Batoche National Historic Site. 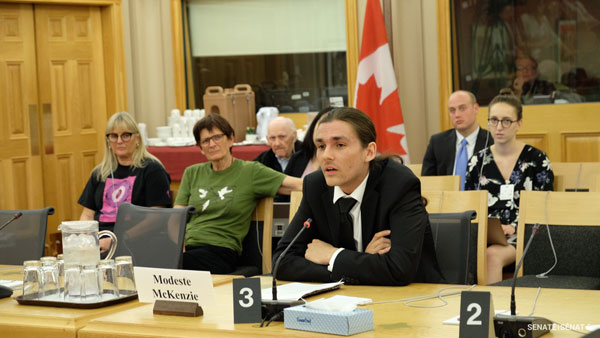 Twenty-two-year-old Modeste McKenzie of La Ronge was one of 10 Indigenous youth leaders chosen from across Canada to speak to Parliament. Photo courtesy of Modeste McKenzie

Valerie Barnes-Connell, who nominated McKenzie for the Senate event was his neighbour in La Ronge and was at many events where McKenzie jigged.

“He just offers [his jigging] and encourages people, like I’ve been up there trying to jig,” she said. “He’s infectious with it but he also has a very firm sense of his identity and culture and his spirituality goes with that, too.”

McKenzie was hired as a youth support worker by the Lac La Ronge Indian Band after a crisis in October 2016, when four young girls committed suicide. Barnes-Connell was communications officer for the Band at the time and saw how hard McKenzie worked to create positivity with special events like traditional hand games, a New Year’s Eve dry dance and a family carnival night.

“Working with those kids, never in my life have I met such amazing, resilient, smart, kind, courageous youth,” McKenzie said in his testimony.

McKenzie highlighted the funding gap between schools on and off reserve. He also explained that the shutting down of the Northern Teachers Education Program in Saskatchewan was an example of government’s misplaced priorities.

“I think [education is] Canada’s greatest injustice right now. Systematically I think, education, especially on reserve, it’s designed to fail the youth,” McKenzie said in a phone interview. “That system is designed to keep young Indigenous people from really reaching their true potential.”

McKenzie also wasn’t shy about his aspirations during the presentation.

“In 20 years, where do I see myself sitting? Hopefully amongst you or in the other House,” he said to the senators. “But right now my main focus is the youth: nurturing, listening, advocating anytime I can.”

“If you can imagine yourself being that, then go with it, dream that dream,” she said. “He would be very well suited to be a Senator because the Senate is all about dreaming a better Canada and representing minorities that are typically underrepresented, like Aboriginal people.”