Ted Whitecalf looks down at the pages of a book chronicling the history of Kahkewistahaw’s 28 veterans and military support workers. On one page, World War II soldier Robert Bobb writes “I prayed the war would be over, so we can come home, and I thank the lord for that” in a letter to his grandson Stuart. On the book’s rear cover, modern-day veteran Evan Taypotat stands next to sandbags in Afghanistan, his assault rifle by his side and the flag of his home reserve held proudly in his hands.

Whitecalf, along with nine others, created the book Onâpêhkâsiwiyiniwak Ôtê Ohci Kâh-Kwîwîstahâw or, in English, Courageous Warriors of Kahkewistahaw First Nation, after the band hired him to capture the stories of multiple generations of veterans. It was officially unveiled on the Broadview-area reserve on Remembrance Day, which started at 10:30 a.m. at the Kahkewistahaw Veterans Memorial Park. 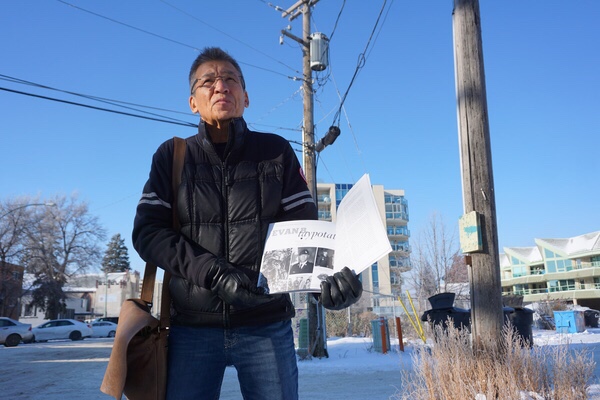 Ted Whitecalf opens to the page on Evan Taypotat, who is now chief of the reserve. Photo by Chelsea Laskowski

The book was in the works for five years as Whitecalf searched through archives in Ottawa, researched, photographed, and did interviews with veterans or family members of the deceased. Coincidentally, Taypotat, who spent five years in the Canadian Army from 2007 to 2012, including one tour in Afghanistan, went on to be elected chief of Kahkewistahaw earlier this year. In the book, Taypotat says he returned home grateful for the peace of his daily life.

“I’m sure there’s a little bit of conflict here and there but in Afghanistan there’s roadside bombs, there are kids that are dying every day. There are women that are used as shields by the Taliban. We can never let that happen in Canada. Whether we are Asian, First Nation, Caucasian, African-American – at the end of the day we have to to stand and make sure our country is safe and then anything else is above and beyond that,” he says.

Whitecalf went to great lengths to give every Kahkewistahaw veteran a mention in the book, even if it was just printing the names of those who fought but otherwise had little information known about them. At one point the book was at the print shop ready to go, but “I put a stop to it,” Whitecalf says, to add in the name of a veteran because “I’ll be sorry later on if I don’t put that on now.”

The research efforts required were quite extensive. Whitecalf says many soldiers’ records are sealed from public viewing at the Canadian War Museum archives and, even though he received a Band Council Resolution from Kahkewistahaw to view documents, there were certain portions blacked out in the documents he received that only next of kin is allowed to view. Also, Whitecalf discovered that photos of World War veterans can be hard to come by.

“Little did I know about that until I got there is that World War, veterans didn’t really have any real photographs that were given. The Air Force were the ones that were photographed and they have a collection of those but the others is families would pay for them to take photos of the army,” he says.

As many veterans either died in battle or have passed on since then, Whitecalf had to track down family members for information about them. Modern tools like Facebook were a surprisingly good resource for finding those people’s families, who provided photos, interviews and information.

In his research, Whitecalf found that some bands accepted those who had gone to war upon their return, even though, by law, many gave up their Indian status to join the army.

Whitecalf says it’s important to remember First Nations veterans who served voluntarily “to go overseas to do what needed to be done for our freedom for our people, for the freedoms that we have today.”