Louis Riel commemorated across the province

November 16th, the date of Louis Riel’s death and state execution, was commemorated across Saskatchewan.

In Saskatoon, the day began with a morning gathering at Gabriel Dumont’s statue on the riverbank in Friendship Park. Bagpipes accompanied the crowd, and St. Michael’s school choir sang the Métis anthem, “Proud to be Métis,” before CUMFI President Shirley Isbister invited everyone for lunch at CUMFI (Central Urban Métis Federation Inc.). 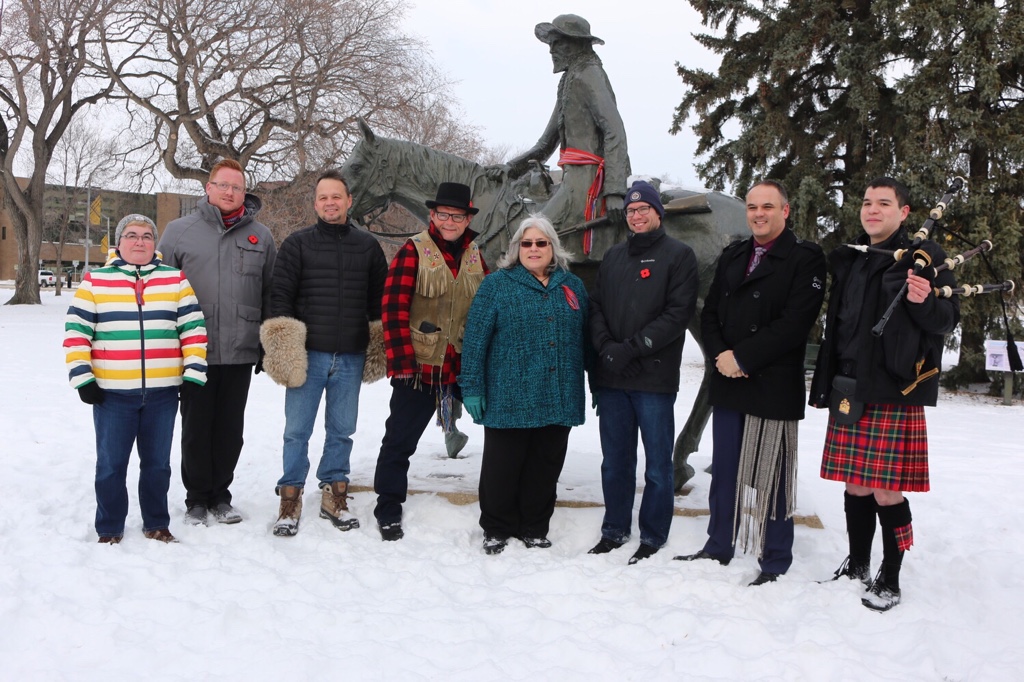 “Louis Riel never left us,” said Elder Norm Fleury, when offering the prayer a few hours later at the CUMFI gathering, celebration, and feast. “His spirit has stayed with us.”

For more photos from the Saskatoon event, check out this photo gallery.

Senator and Elder Nora Cummings also spoke of sacrifice and love as she offered the opening prayer to a large crowd who were treated to numerous performances. This was followed with a traditional Métis feast including elk, moose, pickerel, fish soup, rubabou, bullets and bang, with Pinehouse hunted meat and fish provided by newly elected MN-S President Glen McCallum who also brought official greetings, noting that culture and music make up the Métis identity.

“We’ve been working with both school systems since 2003, 2004 to get Métis culture and history right in the schools,” said Isbister. “St. Michael’s was the first school where we raised the Métis flag and dedicated it, and I remember thinking I wonder if Louis Riel thought this would actually ever happen?”

With preliminary fiddle music by Lenny Dumont accompanied by Jesse Lee who also accompanied all the school musicians, events included a surprise waltz with the mayor after the school conductor explained you never said no to being asked to dance, and Cummings then tapped Mayor Charlie Clark. When he had to leave to another event before giving greetings, MC Shirley Isbister teased it had actually been the joke he’d have to dance the red river jig next. 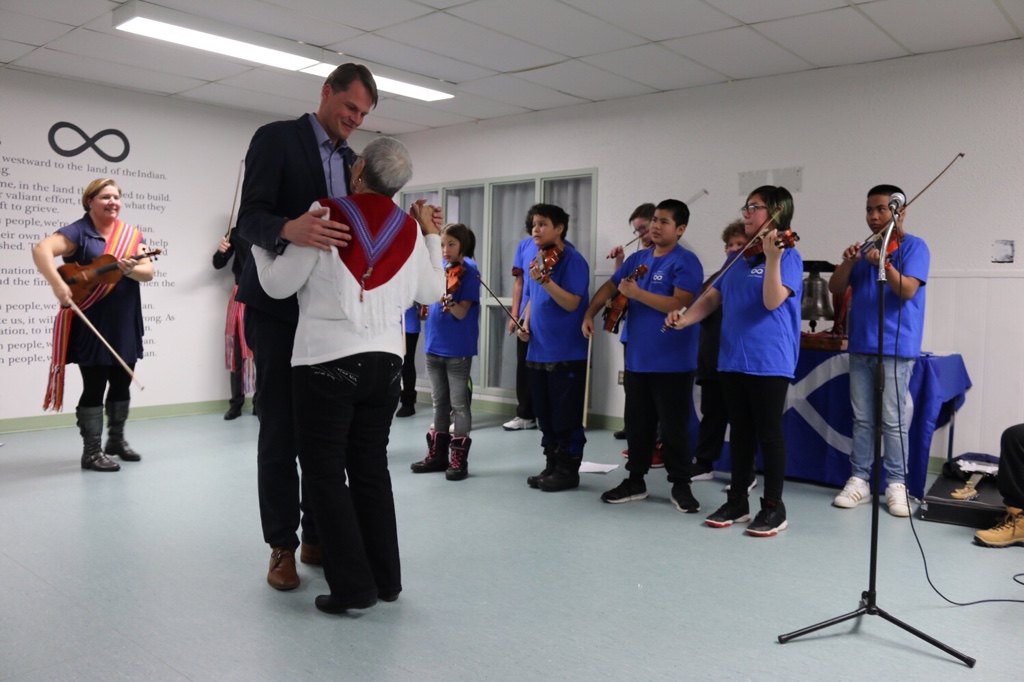 The Westmount Prairie Steppers danced the jig for everyone, and St. Michael’s youth musicians repeated the Métis anthem, this time with their fiddle group who later played the tune which became the Mayor’s and Senator’s Waltz.

Billyjo Delaronde also spoke about the Bell of Batoche, which was present for others to see and note the Gatling gun bullet marks on her exterior, identified by Métis historian and supporter Dennis Fisher who was present with his wife Jean.

Delaronde explained that like the church, the Frog Lake community has agreed it’s the Bell of Batoche, and it will one day return there. He stole back what was stolen for the children and Elders.

Commemorating the gentleness, love, sacrifice, and generosity of Riel was a theme throughout the daylong cultural celebrations which included open house at Gabriel Dumont Institute in a display commemorating Métis veterans, and a joint evening event with the Francophone Federation at Station 20 West.

Speakers in the evening included Fleury, this time speaking about Madame Tourond of Batoche and Tourond’s Coulee (also known as Fish Creek) as an example of enduring matriarchy so important to Métis culture. When Riel came to Batoche she was one of the first persons he visited.

“Riel would come to offer condolences on the loss of her husband, and to seek her encouragement and the participation of her sons to oppose the government in the second resistance.”

Riel’s reputation not only lifelong but in the first resistance in founding Manitoba was what had brought the Batoche community to seek him in exile in Montana. As for Tourond, when her farm was looted she crossed enemy lines to the soldier’s encampment and demanded back her horses and wagon.

“The troops were so dismayed at the courage and bravery of this 52-year-old widow that they promptly hitched her horses and wagon and watched as she rode back to her people,” said Fleury. She would lose two sons in the battle, and in seven short years would in total lose six sons and one daughter, but would go on to live to 1928, aged 97. “This is a survivor we’re talking about, and when we’re talking about survivors we’re also talking about people who suffered in different ways. Most of us are survivors...the 60’s scoop, residential school, and generational effects.”

Fleury noted that the ones gone before us now give us their prayers, including Tourond and Riel.

Scott Duffee spoke on his own familial relationship to Riel before jigging, teaching a quick dance lesson, and fiddling so others could dance.

“Riel was known for his gentleness...what Louis Riel brought was a spirit of inclusiveness and a spirit of interconnectedness...in all of us, and he really wanted all of us to live together here. To respect our distinct cultures and yet to relate to each another always in a good way as human beings,” said Duffee to applause. “That’s the spirit of Louis Riel. And that’s the spirit we want to manifest.”

Beginning with a more solemn take on the evening, breaking for food, and ending with entertainment which included performances by Duffee, Freddy and Sheila Pelletier and Jesse Lee’s originals and a few more opportunities for reels and jigs, in Saskatoon the day closed with the Federation gifting their sashes to the Métis performers and organizers “in the spirit of reconciliation.” Organizer and MC Karon Shmon of Gabriel Dumont Institute (GDI) and Publishing in turn gifted the Federation with a traditional sash from GDI.

Other commemorations, vigils, and celebrations were held in locations such as La Ronge and Regina.