Commissioners say they are committed to MMIWG inquiry process, families

The heads of the National Inquiry into Missing and Murdered Indigenous Women and Girls say they have been directly responding to calls from families concerned amid cries for an inquiry reset.
Commissioner Michele Audette said she and her fellow commissioners have made sure to respond to any families who have called or gotten in touch with them with concerns, all in order to reassure them that the inquiry will continue ahead.
The need for reassurance comes after an inquiry lawyer’s resignation this week, and a staffer’s leaked email that stated her priority is to protect the commissioners, both of which provided outside distraction from Saskatoon testimony from loved ones and survivors. 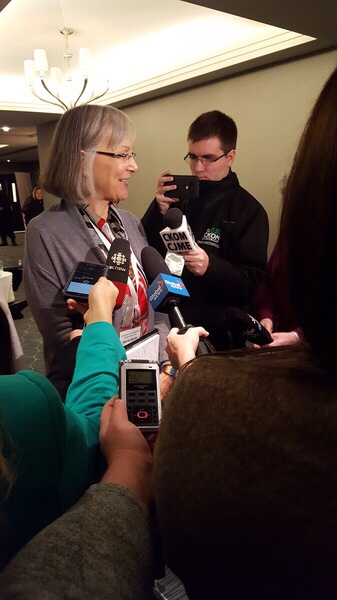 Chief Commissioner Marion Buller addresses reporters during this week’s MMIWG public hearings in Saskatoon. Photo by Chelsea Laskowski
Both Audette and Chief Commissioner Marion Buller asserted to media that they will not be swayed from continuing the work they are doing, and that families on the ground want them to stick this out and honour their testimony.
Speaking directly to reporters, Audette said, “I hope you’re helping us and helping the families to bring that good news, too, that they need this inquiry.”
“The real news here this week is what the families and the survivors are telling us,” Buller said.

Barb Badger, whose cousin Shelley Napope was murdered in 1992, delivered her testimony on Wednesday and agreed with the commissioners.

“The whole idea of the hearing and the inquiry is about us, the families, and the importance of being able to speak and share, and honour our loved ones. And that's what people were forgetting," Badger said. "My main concern was being able to tell our story, being able to share who Shelley was. And I want people to remember that rather than remember all these internal conflicts."

The commissioners said they have concerns over the federal government’s failure to enact two recommendations from their interim report. The first is to increase funding and availability of supports for families. The second recommendation is to extend the inquiry past its mandated December 2018 end time, which Audette said is a struggle as people’s testimony often doesn’t fit into the one-week-per-stop timeline and the commissioners do not cut families off while they’re testifying.
Those comments came during a media conference in which each news agency was allowed to ask one question, with follow-up questions or requests for clarification often being interrupted by the commissioners’ handler. The inquiry itself, being held at the Saskatoon Sheraton Hotel, has been a highly controlled environment for media, who were told not to approach any of those testifying nor to approach staff - not even local groups who are partnering with the inquiry to offer supports - without first talking to a communications worker. Photography is allowed only in certain regions.
Meanwhile, earlier in the week Senator Lillian Dyck was easily approachable for comment before sitting in on the first sessions of the MMIWG inquiry in her home province.
Dyck, who is a longtime member of a Saskatoon support group for missing and murdered Indigenous women, said she hopes things will pull together.
“There may be reasons why it’s sort of gone off the rails, to really test us to make us even more committed. So I don’t think we should give up by any means, it’s way too important,” she said.
Dyck had an aunt who was murdered in the 1950s. She said she wants people to listen to what the families have to say and understand that there is a real problem in this country.
The week of hearings is set to wrap up on Thursday.