The Winnipeg Grenadiers travelled on a CPR train to Vancouver and embarked from Vancouver on October 27 arriving in Hong Kong on November 16, 1941.

The Battle in Hong Kong was Canada's first major combat experience of the Second World War in the Pacific region. They did not confront Hitler's armies, but rather the expansionist Empire of Japan. In December 1941, the Canadian government honored a British request to strengthen the defences in Hong Kong so Canada sent 1,975 troops including the Winnipeg Grenadiers. 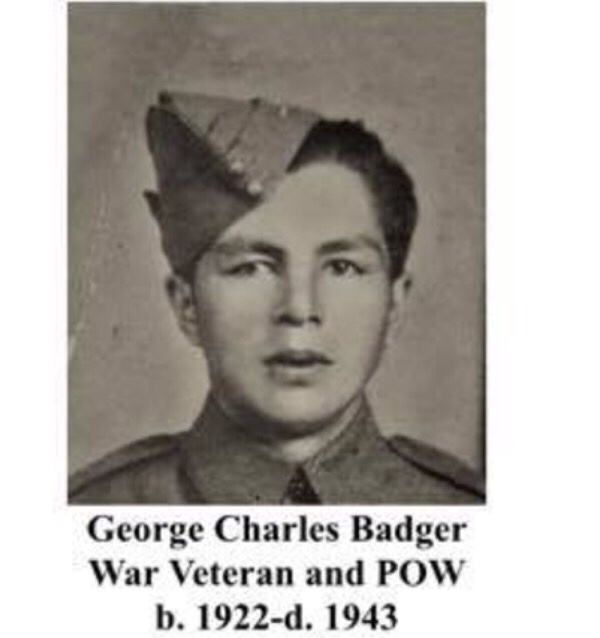 Within a few weeks, the Japanese attackers overwhelmed the Canadian defenders, who were still waiting for supplies. Although our troops fought bravely, by Christmas Day 1941, they and 12,000 British and Indian troops had lost the battle. Every Canadian soldier was wounded, captured, or killed.

Two prisoner-of-war camps where Canadians were imprisoned were the Sham Shui Po Prison Camp on the mainland, near Kowloon, and the North Point Camp in northern Hong Kong. Badger was along those in Sham Shui Po. Upon capture, Canadian prisoners had to endure horrendous treatment in the Japanese prisoner-of-war (POW) camps. Prisoners were forced to endure horrific conditions.

Already exhausted from battle, many wounded, they faced the unknown and hoped for the best. Our Canadian soldiers faced three and a half years of brutal captivity. Many did not survive the exposure to diseases and starvation. My great Grandfather George Badger died of malaria in November of 1943. A fellow soldier recorded that they held “a quiet service in the chapel” of the POW camp before burying Badger. My great Grandfather is now buried in Sai Wan War Cemetery in Hong Kong.

“You have an agreement with the queen and she needs your help today, so if you do not help you are not following your agreement.” This message was sent to many Indigenous men before volunteering to enlist. It is important to recognize that the Indigenous soldier was not enlisting to fight for the queen’s land, not Canadian land, but for the land of their ancestors, people, family and the generations to come.

Indians enlisted to fight for this country no matter the treatment they were getting from the government with all the other things going on during that time. They were fighting to maintain a relationship and connection to the land and not for greed.

Canada forgot its native soldiers. It took Canada almost 50 years to invite native soldiers to lay a wreath in Ottawa on Remembrance Day, and longer still to compensate them for their stolen benfits.

The men were always being taken away from the communities leaving the women defenseless at home and unfortunately many suffered abuses from Indian Agents and had their children ripped from them and sent to Residential Schools.

Alcoholism became a way of dealing with all the trauma they had been through. Eurocentric masculinity ideals that came over along with alcohol and diseases made things exceptionally hard on Indigenous men going through trauma. It became a lot harder for them to show emotion when they returned from war.

First Nations always have to fight with the government just to get rights, just to get what we deserve as human beings, as veterans, as residential school survivors, as women, as children. My great grandfather did not fight and die for nothing, we honor and remember and carry you with us in our hearts, George Charles Badger.