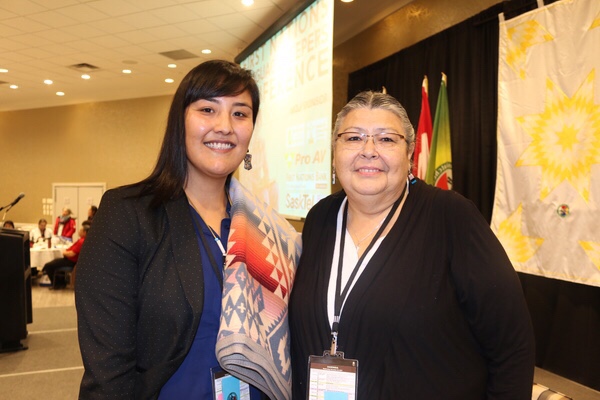 Gray, who is Ts’msyen from Lax Kw’alaams British Columbia with Mikisew Cree and Dene roots from Fort Chipewyan, Alberta, shared her academic papers and experience on reclaiming and repatriating Indigenous song from archives and copyright while asserting Indigenous laws. Laura Boulton, hired by the National Film Board in 1941, collected cultural material which she then sold to American universities as if it were her property in the 1960’s for $10,000 a year, making nearly $200,000 before she passed away in the 1980’s, while Columbia University considered themselves the owners of the collection and shared with Indiana University and the Library of Congress.

“Ts’mysen were not consulted or informed,” noted Gray, adding there was no consultation or consideration of the due process and protocol, explaining that copyright law was claimed by Boulton rather than the proper Indigenous laws which should actually supersede property laws. “This represents one of the colonizing properties of Western property framework, especially in a settler colonial society where Indigenous communities are hyper-researched, where Indigenous knowledge is hyper-represented in the archives even though the people and their laws are not.”

The information provided was very scant, and so Gray had to do her best to muddle through titles like “Indian Song” and “Folk Song” and try to figure out what the content actually was along with her community, as they worked to repatriate the songs and information: what she called oral resuscitation.

“It is interesting to me that in museums and archives, the labels for each individual item often tells us more about what the institutions do not know, even though they imply otherwise,” noted Gray. She has worked with over 300 Ts’msyen of all ages to date on these songs in listening gatherings and translation workshops, along with discussions about law within talking circles. “Indigenous repatriation is an opportunity to right historical wrongs, to remedy settler colonial violations, and to build new nation-to-nation relationships with Indigenous peoples.”

In 1942 there was no protection, but now it is an act of reclamation, despite the way Western law upholds itself.

“Language isn’t just words, it’s concept and worldview,” said SICC President Wanda Wilson in the opening greeting. “It’s not just a right but a responsibility to take care of that role.”

After Gray’s keynote to over six hundred attendees, Wilson noted that she had heard her at another conference and hastened to book her. The conference included numerous workshops, an Elder’s panel, youth panels, speakers on the Nakoda language, and the winner of the language book award, Bronte Big Eagle - a youth who wrote a children’s book in Nakoda entitled “The Legend of the T-Rex’s Short Arms” which was then published by SICC.