Krystle Pederson, who plays a Métis woman named Madeleine, says the play has been received incredibly well in French in Ottawa, Montréal, and Winnipeg. But she’s really excited to perform in English in her hometown, where the story of Gabriel Dumont is perhaps more widely known — but it’s still never been told like this! 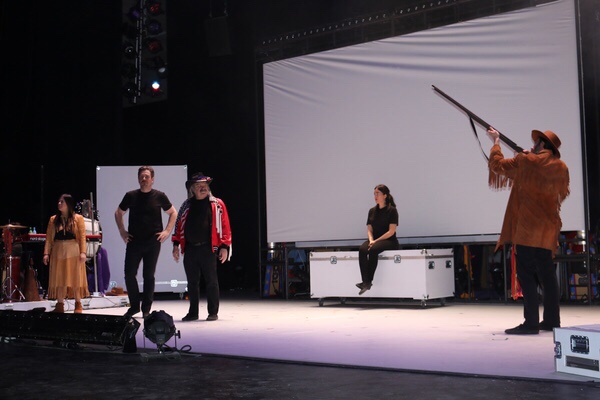 “It’s been an amazing adventure,” says Pederson, adding she can’t wait for Saskatchewan to see it. “The stories live here, people know the stories and the history, and it’s been an exciting journey being part of this.”

Pederson says the Montréal and Ottawa audiences were very attentive, and audience members would often want to repeat the experience and see the play more than once.

“It’s kind of an entire history lesson and they wanted to come back and learn more about the history,” she said, whereas in Winnipeg there was more familiarity with the history in the Red River settlement but there was still a lot of excitement. “They said it was nice to hear Gabriel Dumont’s voice, and even some said they discovered new things about Louis Riel too.”

Asked what audiences could expect, Pederson said: “A spectacle.”

She went on to explain it’s very adventurous — she herself undertook extensive whip training which she uses to great effect on stage — and they break the fourth wall a lot in the story.

“We really involve the audience: they are the Métis and voyageurs coming with us on this journey, and I hope they feel they belong and are a part of the whole history of Batoche, and feel like they’re fighting alongside the Métis.” 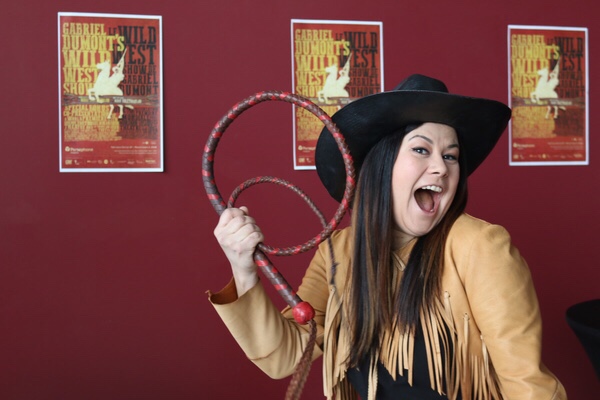 Actor Krystle Pederson says the Montréal and Ottawa audiences were very attentive, and audience members would often want to repeat the experience and see the play more than once.

She says that’s the key thing: people are going along on a journey, and it’s an adventurous one. Pederson, well-known for her singing talents, also wrote two songs for the production. A live musician onstage provides sound-cues and musical support, and a large projection screen features helpful (sometime humourous) subtitles and visuals. In the preview, one scene featured a creative take on the RCMP Musical Ride, before the screen dimmed to a batsignal graphic featuring the Métis infinity sign, as the shadowy figure of Gabriel Dumont rose from the darkness to impressive laughs — and great dramatic flair. Clearly the writers, actors, director, and creative team have had fun bringing this to the stage, something Gabriel Dumont always dreamed of: a wild west show portraying the Métis nation. As a proud Métis woman, Pederson hopes everyone comes in droves and enjoys themselves.

And Robert Gagné, the french director of the National Arts Centre, adds they are delighted to have a talent like Pederson onstage.

“We’re just thrilled to be working with her.”

The play runs until March 4th at Persephone Theatre.