Trudi Mercredi voiced her story of the financial need to offset the costs of her son Darnell’s medical trip. Her voice was heard. A few days ago, Mercredi received a call that her son’s medical trip will be fully covered under the Jordan’s Principle.

“When I received the call from Jordan’s principle, I was relieved of a huge amount of worry and stress,” said Mercredi. “My prayers were answered. There are people out in this world with beautiful hearts and spirits. I continue to see it.”

Ten-year-old Darnell will be having reconstructive face surgery in Toronto this year – date is unknown. Mercredi said they will be given two-weeks notice of the surgery date. That gives her time to pack up and fly out to Toronto with her two son’s and another family member for moral support. She worried of the financial part of the trip and did not want to postpone due to insufficient funds.

Mercredi was unable to secure financial assistance from her home community of James Smith Cree Nation. Her hope was restored once she received a phone call about receiving full coverage of her trip from people of the Jordan’s Principle. Jordan’s Principle is a child first and needs-based principle to meet the health supports of Indigenous children living on or off-reserve in Canada. 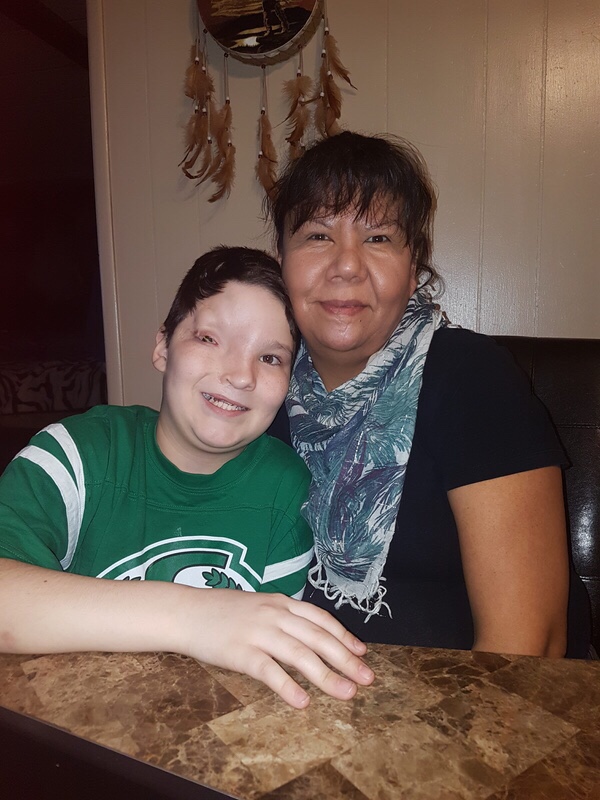 Trudi Mercredi’s prayers were answered, as she will be receiving financial help From Jordan’s Principle for costs associated with her son’s reconstructive surgery.

It stemmed after a five-year-old Indigenous boy named Jordan River Anderson from Norway House Cree Nation, Manitoba, who died in hospital while the provincial and federal government bickered over his health costs. Last May, the federal government agreed to fully implement Jordan’s Principle in response to another ruling issued from the Canadian Human Rights Tribunal (CHRT). Indigenous Services Canada recently set up a new Jordan’s Principle call centre to offer families the health and medical services and supports they need.

According to the Government of Canada website, from July 2016 to December 2017, “there have been more than 33,000 requests for products, services and supports approved for First Nations children under Jordan’s Principle - A Child-First Initiative. These include mental health supports, medical equipment, speech therapy, educational supports, and more.”