Jimmie Durham: At the Center of the World to open at Remai Modern

On March 25, Remai Modern will open the only Canadian stop of Jimmie Durham: At the Center of the World. The first North American retrospective of the American artist’s work will be on display in the museum’s Marquee and Feature galleries until August 12, 2018. The exhibition of this compelling and inventive artist features nearly 175 works dating from 1970 to today. 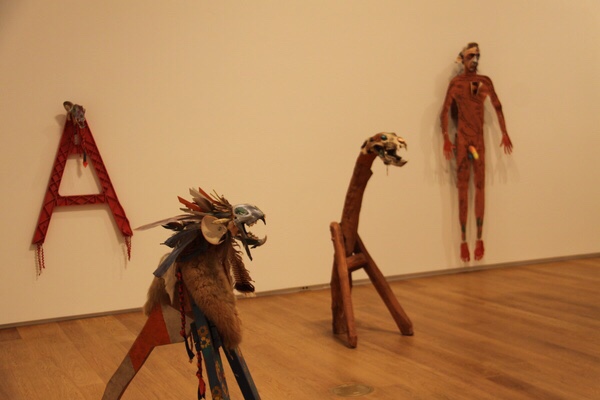 “As the only Canadian venue presenting Jimmie Durham: At the Center of the World, Remai Modern offers an opportunity for our audiences to experience Durham’s ideas in-depth and in person,” said Gregory Burke, Executive Director & CEO of Remai Modern. “We are excited to share the work of such an important and multifaceted artist.”

In an effort to include multiple voices and perspectives, the program for At the Center of the World includes a conversation about Durham’s writing, a lecture series and a film series. The lecture series features the exhibition’s curator Anne Ellegood, art historian Richard William Hill, and curator, artist and educator Gerald McMaster, who was recently named Adjunct Curator for Remai Modern. These conversations will add perspectives on Durham’s influence in Canada. The June film series includes works selected by Durham, giving insight into his interests and influences.

A political organizer for the American Indian Movement during the 1970s, Durham was an active participant in New York City's downtown artistic community in the 1980s. In 1987, Durham moved to Cuernavaca, Mexico and then to Europe in 1994, where he has lived ever since. Predominantly a sculptor, Durham frequently combines everyday objects and natural materials and incorporates text to expose Western-centric views and prejudices hidden in language, objects and institutions, or to speak directly to the viewer with his characteristic mix of humour and candour. Calling himself an "interventionist," Durham is often critical in his analysis of society, but with a distinctive wit that is simultaneously generous and humorous.

At the Center of the World demonstrates his commitment to shedding light on the complexities of historical narratives, notions of authenticity and the borders and boundaries that try to contain us. For Durham, a rock, a piece of driftwood, a dirty shirt, a car bumper, a piece of trash or a bear skull are all equally fertile objects to be incorporated into his work. The exhibition outlines Durham's expansive practice—spanning sculpture, drawing, collage, printmaking, painting, photography, video, performance and poetry.

Jimmie Durham: At the Center of the World is organized by the Hammer Museum, Los Angeles, and curated by Anne Ellegood, Senior Curator, with MacKenzie Stevens, Curatorial Associate. Remai Modern's presentation is organized by Sandra Guimarães, Director of Programs & Chief Curator.