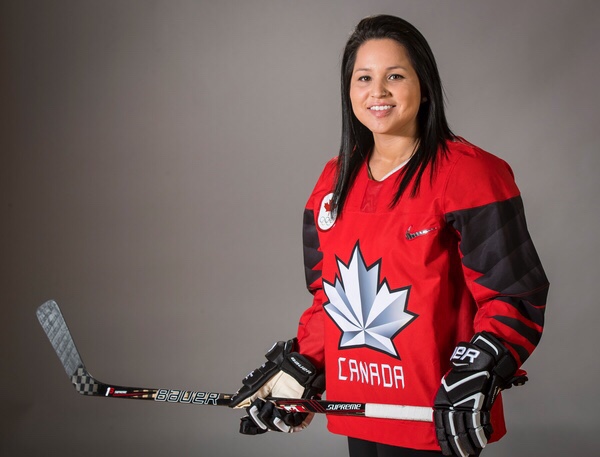 A dream came true for a young Indigenous female hockey player who always wanted to represent her country and Indigenous people competing in the Olympics. Brigette Lacquette brought home a silver medal playing with the Canada’s National Women’s Hockey Team in this year’s Olympics held in PyeongChang, South Korea. It is something that she will never forget.

“The entire experience was pretty amazing. The opening and closing ceremonies was awesome,” said Lacquette, who played defence. “When I first walked out there in the opening ceremonies, I remember [thinking] ‘wow, I’m here and I made it.’ It was pretty special.”

She said there was so much to take in being apart of the Olympics. It was an exciting milestone that many athletes dream of accomplishing.

“It was a dream come true to represent my country on a world stage,” Lacquette said. “I remember my first game, I had the chills. The crowd was great there. It was awesome.”

Lacquette, 25, a member of the Cote First Nation but grew up in Mallard, Manitoba, has been playing the sport for over 20 years. Growing up, she started to play with her older cousins and even called herself a tomboy and also enjoyed playing multiple sports but hockey was a sport that stuck with her.

“I was able to be myself out on the ice,” she said. “Hockey gave me confidence…I had to grow through a lot of obstacles.”

Lacquette was bullied when she was younger due to a skin condition she developed called eczema but she channeled her energy and developed confidence through the sport she loved.

She had no specific role model in hockey but she always admired the ladies on the National Women’s team. She was inspired when NHL hockey player Jordin Tootoo represented Canada in the World Junior Ice Hockey Championships back in 2003. Since then, she chased that dream to compete and represent her people on an international level.

But it wasn’t easy for Lacquette. She had to train herself everyday to ensure she was physically fit and she had to practice hockey on a daily basis. After she was picked to play for Team Canada, she had to move to Calgary this past year to train as a team where they practiced everyday on the ice to prepare for the Olympics. In doing so, she wanted to make her mark as an Indigenous female hockey player

“I want to be that role model for the all those Indigenous kids across Canada…playing at the Olympic stage I just wanted to show them that they can do it too. Anything is possible if you just believe in yourself.”

Lacquette said she plans to continue focusing on hockey and herself with hopes to competing again on a national level. She hopes her story will inspire others to chase their dreams and to work hard at what you love to do.

“It doesn’t matter where you come from, you can always achieve your dreams,” said Lacquette.