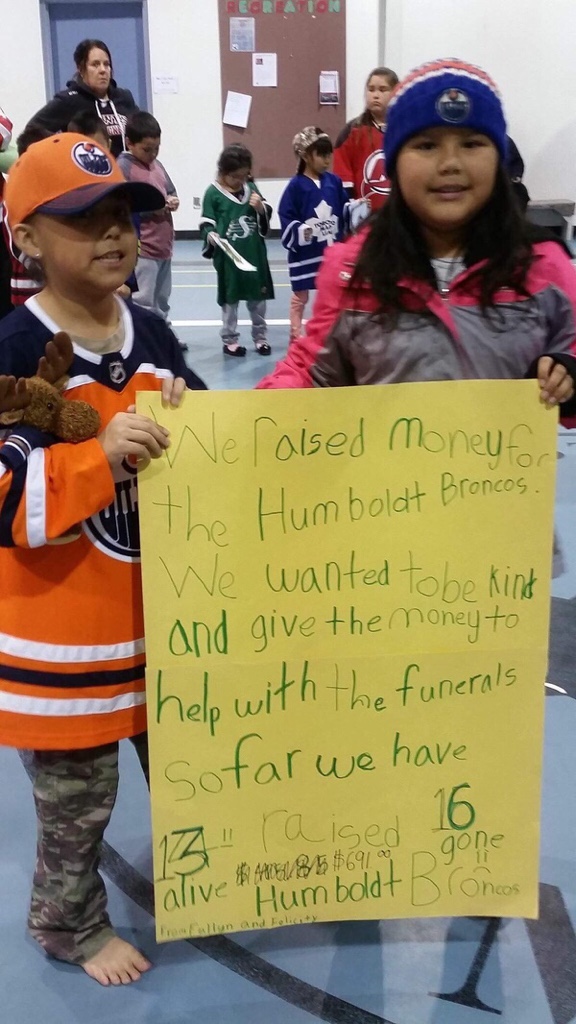 (L-R) Felicity and Fallyn from Muskeg Lake Cree Nation started a fundraiser to donate for the families of the Humboldt Broncos bus crash. They raised over $1,500 and plan to present the money to the families. Photo supplied by Kimberly Greyeyes-Pinay.

Two little girls from Muskeg Lake Cree Nation spearheaded a fundraising initiative for the families of the lives lost in the Humbolt Broncos bus crash tragedy that shook the nation last week. Fallyn Moyah-Arcand and Felicity Pinay, both 8-years-old, are students at the Kihiw Waciston School located in the reserve. The idea transpired after they heard their school was having a ‘jersey day’ on Thursday in memory of the 16 lives that were lost in the tragedy.

Felicity was set to wear her Edmonton Oilers jersey but when she learned that her friend, Fallyn, didn’t own a jersey they decided to fundraise to buy one. The girls went around the school asking staff for donations starting with $9 from Felicity’s pocket and at the end of the day, they had $35 in total.

The next day, the two girls had a change of heart. Instead of buying a jersey, they decided to donate the money raised to the families involved in last week’s bus crash.

“I am so proud of them, they are friends for a reason. They are little girls with big hearts,” said Kimberly Greyeyes-Pinay, grandmother who raises Felicity. “That shows [us] that we’re going in the right direction and teaching our children the right values.”

To fundraise for more money, Fallyn and Felicity decided to organize a hot dog and bake sale at their school where they made $500 in sales. The rest of the money came from donations throughout Saskatchewan when their fundraising effort was posted on Facebook. Felicity’s family pitched in by staying up late on Wednesday evening to bake for the bake sale and the Chief of Muskeg Lake Cree Nation donated money for the hot dogs.

Greyeyes-Pinay said she is extremely proud of her granddaughter and their passion to take part of something bigger than they’ve hoped for.

“If you ever met these two little girls, they have the biggest hearts. It’s insane,” said Greyeyes-Pinay. “They decided that the families of the [Humboldt] Broncos needed this money more than they needed a jersey to wear.”

Kimberly Read, former teacher of the two girls, has helped with the fundraising efforts. She said people have expressed their pride in Fallyn and Felicity’s initiative to help the families who are in mourning and to support those who are still in the hospital.

“They wanted to help with the [costs] of funerals and the hospital stays,” said Read. “It’s amazing the supports they’ve been receiving. I’m so proud of them because they could have easily [spent] that $35 and bought what they could with it but instead they came up the idea to donate the money. It’s just amazing to see this from two little 8-year-olds.”

The two best friends plan to donate the total of over $1,500 to the families in person on Friday, April 13th.

“It just goes to show how big of an impact this tragedy has had on this province and the country,” said Greyeyes-Pinay.