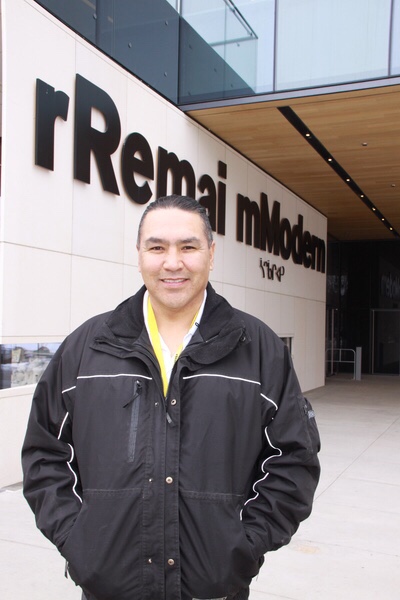 As Indigenous Relations Advisor for the rRemai mModern, Lyndon Linklater is responsible for ensuring Indigenous art, culture, and practices are incorporated.

The popular Remai Modern Art Gallery in Saskatoon incorporates Indigenous inclusion on various levels. Lyndon Linklater, who is the museum’s Indigenous Relations Advisor, is a part of making that happen.

“We have started a journey together. By virtue of the [museum] involving an Indigenous perspective in what they do says a lot about their character,” he said. “It’s a really exciting position to be in.”

Linklater was offered the job last August and was asked from an Indigenous perspective on how to make the place more inclusive for all people. He explained that elders are always essential in decision making and guidance discussions in the Indigenous culture. Linklater gathered about a dozen First Nation and Metis elders along with the museum’s senior management team and Saskatoon’s mayor. Following the meeting, the elders directed Linklater to start off by smudging the entire four-storey building which took approximately two hours to do. It was something that Linklater was proud to take part in.

“They are trying to be different and they are different because they are unchartered territory. How they have gone about doing things thus far has really impressed me,” he said. “What kind of organization can say that they had their whole brand-new building smudged and blessed with a pipe ceremony? Not too many places can say that.”

“It was a really great success,” he said. “We had powwow dancers, and Metis jigging and fiddlers to add to the celebratory component of the grand opening. That was the nature of my involvement with them.”

Linklater’s background includes tons of community work. He works for the Office of the Treaty Commissioner (OTC) on the Speakers Bureau by dealing with public education. He also does public speaking engagements from all spectrums – kindergartners, senior citizen homes, RCMP, and unions. In his public speaking sessions, he provides public education about Indigenous history, culture, treaties, and contemporary issues. Linklater also works in the Regional Psychiatric Center by providing cultural services such as sweat-lodge ceremonies and other First Nations ceremonies, as a means for treatment and rehabilitation. He does his own public consulting such as delivering awareness workshops and doing reconciliation work.

He learned these ways from his parents, Maria and Walter Linklater, who are respected elders and are also residential school survivors. His parents showed him a different way to live by introducing him and his siblings to their Indigenous culture and practises. Today, he can speak his Cree language and understands the teachings of ceremonies that were handed down to him from his father.

“I can perform ceremonies and run sweat-lodges. I have been learning and have been doing it. I am an oskapewis, an elder’s helper,” he said. “My folks here are getting older. My dad said, “You’ve got to do this for me now because I can’t do it.” It’s like I’m filling in now. That is kind of our story.”

With the handed down traditional knowledge, he was able to incorporate some of his teachings into the Remai Modern Arts Museum. Hiring Indigenous staff and showcasing Indigenous artists and their works are a step forward to Indigenous inclusion, said Linklater. One of his favourite things is seeing syllabics written in the Cree language outside the building.

“There are many different components of art and it is important to maintain your culture. That is what makes us unique as people is our culture,” said Linklater. “As Indigenous people, we do have our own culture and some of our concepts have helped shape the world today, to make the world a better place. That is part of culture and part of that is art.”