The hearing on the $875 million Sixties Scoop settlement case began Thursday in Saskatoon.

Presided by federal judge Michel Shore, the hearings gave opportunity for survivors, as well as their supporters and opponents, to voice their opinions on the proposed settlement. The hearings were moved last minute from courthouse to the Radisson hotel in downtown Saskatoon in order to accommodate the greater than 200 people in attendance.

Under the settlement conditions, $750 million would go to the survivors; individual claimants would receive between $25,000 and $50,000 each. Lawyers representing the survivors would collect $75 million. The settlement also proposes $50 million dedicated to establishing a healing foundation, led by Sixties Scoop survivors.

“I stress; bridge the generations. Give meaning to the suffering. For the whole of Canada, now and for the future,” said Merchant.

Many survivors voiced their hope that the settlement would provide closure and encourage healing. Survivors also voiced several objections to the proposed settlement, most notably that the maximum compensation of $50,000 is not enough, as well as questioning the $75 million going to lawyers and the omission of Metis survivors from the settlement. 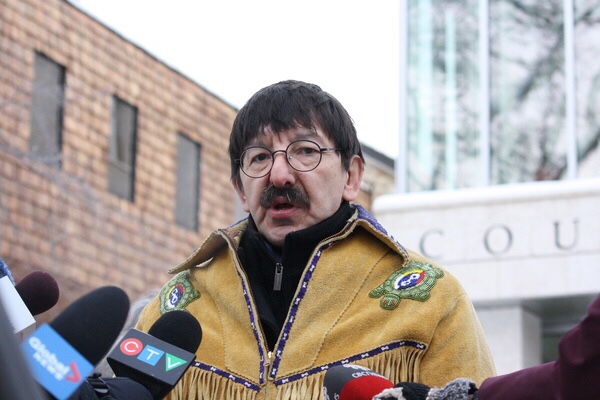 Former MN-S President in January when he filed a statement of claim against the federal and provincial governments regarding the Sixties Scoop settlement. Stock photo

Cindy Patterson was one of the many to voice her objections during Thursday's hearing.

“I object to the leftover or remaining funds going to the proposed foundation – that money should go towards a survivor’s compensation. I object to how this settlement was drawn up between the law firms and federal government. I object to how the federal government will not be held responsible and accountable to their actions and implementation to the process that created the sixties scoop,” continued Patterson, who received applause throughout her objections.

Others argued that the deal should be altered, but not done away with. Judge Shore ensured that all those who wanted to have their voices heard would be permitted to speak, even promising to stay late into the evening if necessary.

“The stories of each individual, if not told here, must be told, will be told, and have to be told in order to move on (...) a flower cannot grow if it does not have its roots,” said Judge Shore.

Maggie Blue Waters, the lead plaintiff in Saskatchewan, is a Sixties Scoop survivor who was taken from her family when she was five years old. She has been working with Merchant Law Group in the class action case for the last nine years, and is hopeful that their hard work will finally be realized.

“The greatest expectation would be that others would listen and also feel that this is not only necessary but will be helpful in their healing. This is a long awaited day,” Blue Waters told Eagle Feather News.

“As survivors, we are ready to move past our pain. The fact that it is spring is very symbolic; spring being a time of renewal. This proposed settlement can give us survivors a sense of renewal.”

The hearing is expected to continue all day Friday.