Maria Campbell among those honoured for lifetime achievements with honourary doctorate 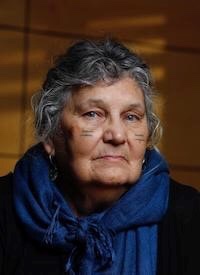 Métis author, playwright, and teacher Maria Campbell is among Three champions for vulnerable communities who will be recognized for their lifetime achievements when The University of Winnipeg confers its honorary doctorates at the 2018 Spring Convocation.

“Maria Campbell, Peter Agre, and Albert McLeod each had a monumental role in shifting the conversation in their respective communities, giving hope to people struggling with issues like injustice, disease, or identity during times when their voices went unheard,” said Dr. Annette Trimbee, President and Vice-Chancellor, UWinnipeg. “They are incredible role models for our next generation of graduating leaders, and we are so proud to recognize their work through these honorary degrees.”

Métis author, playwright, teacher, Elder, and community worker, Campbell is a lifelong advocate and contributor to Indigenous and Canadian letters, arts, and politics. In 1973, her ground breaking autobiographical novel Halfbreed told the compelling story of a strong-willed woman who defeated poverty, racism, and alcohol and drug addiction by the age of 33. It is a book about courage, integrity, and healing with momentous impact on Canadian culture, marking the emergence of Métis literature, and is still widely read and taught today. Born on a trap line in northwestern Saskatchewan, she considers herself first and foremost a community worker and organizer. She has worked tirelessly with community members, political leaders, artists, writers, scholars, feminists, and allies to advocate for women’s and Indigenous rights. In 2008, she was named to the Order of Canada.

“Maria Campbell is a strikingly original artist. Her powerful, ground breaking work as a woman writer is an inspiration to all Canadians, especially for young women struggling with adversity, poverty, and discrimination,” says Catherine Taylor, Acting Dean of Arts, The University of Winnipeg.