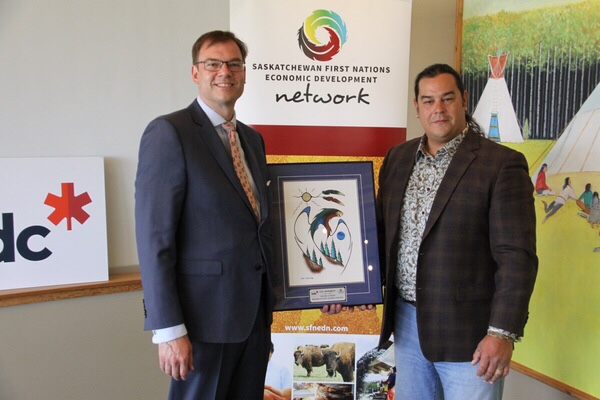 The Individual Economic Developer Award went to Lee Ahenakew. A unanimous selection, Ahenakew has had input in some major economic growth including being one of the founding board members of SIGA and ushering First Nations into the gaming sector, Vice-President of Member Relations for the Canadian Council for Aboriginal Business (CCAB) and Chief Executive Officer for BATC Investments Ltd, a development corporation owned by member First Nations of Battlefords Agency Tribal Chiefs

Lee found an opportunity at BHP Billiton Potash to do this. During Lee’s time at BHP he managed a team of 3, overseeing relationships between BHP Billiton’s Potash business and local First Nations and municipalities for Jansen Project. He supported planning and First Nations engagement for a port solution and planned and managed integration of socio-economic studies into 2 mining project studies. In this position he won BHP Billiton’s 2015 Health Safety and Environment Awards (Community category), an international award, for negotiation of best case practice opportunity agreements with Kawacatoose, Day Star, and Muskowekwan First Nations. 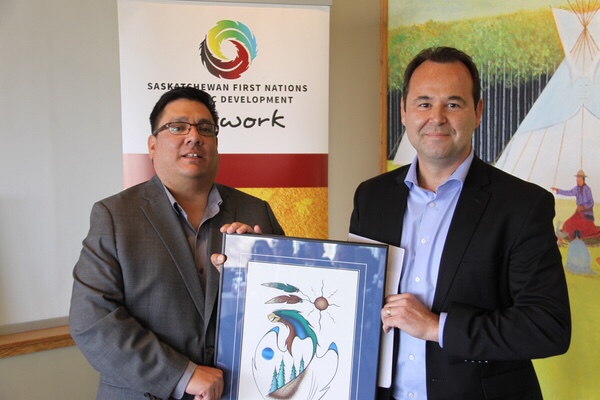 “My dad took his art and that concept and helped create national organizations like Canadian Indian Artisans to sell crafts. They took that it turned it into a business that employed people,” said Ahenakew in his acceptance speech. “He told me that if you have gifts, you have to share it with the community.”

Ahenakew has also been a director for the First Nation Power Authority and the Board of Governors for the University of Saskatchewan where he became president, the first Indigenous Chair of the Board for a medical-doctoral University in Canada.

The Community Economic Developer Award went to STC Industrial. STC Industrial is owned by the Saskatoon Tribal Council and was formally launched April 1, 2017 with a basic business plan and goal to leverage the interests of the Saskatchewan resource sectors Aboriginal engagement initiatives. With one staff member, no work, and limited capital, STCI began its plan to recruit staff, secure clients, and move its brand forward into the market. Through focused development of relationships with major Saskatchewan players such as Nutrien and SaskPower Corporation, STCI was able to land and grow a book of work within the first 6 months.

After their first year in business, they had zero injuries and sixty per cent Indigenous employment. The award was accepted by STCI President Brad Darbyshire.

“We see a huge upside to Indigenous economic development. It is a great way to improve the quality of life of our citizens. The Tribal Council team is responsible for this award and our success,” said Darbyshire. “But we wouldn’t be here if it wasn’t for our clients. They are the key. At Nutrien, Leanne Bellegarde and Tim Herrod have been big advocates of ours and have provided opportunity. Nutrien is providing a way for STC and the entire Indigenous community and beyond.”

Nutrien and STC have partnered to host an event that brought together dozens of Nutrien suppliers to meet with leaders and economic development people of the seven member First Nations to talk about potential business ventures and partnerships. STCI also supports many community initiatives including the White Buffalo Youth Lodge Vampire Gala, the Annual Saskatoon Tribal Council Future is Yours career fair and the back to school back pack program with sponsor Nutrien.

“STCI employees First Nation people from across Saskatchewan from Fond du Lac to Cowessess,” added Darbyshire. “We have grown immensely and paid over one million dollars in wages into the community. It is a huge win thanks to Nutrien and SaskPower.”

All that is music to the ears of SFNEDN Executive Director Shaun Soonias.

“Lee Ahenakew has done a lot from an institutional standpoint and his work at the First Nation Power Authority and BATC from a business standpoint. And STC Industrial has created wealth and employment, said Soonias. “And both speakers today spoke to the mining and resource sector with opportunity in the supply chain. Our First Nations are maturing and becoming more sophisticated with structured organizations. Today showed there is a lot of support for our First Nations. We see in this room a great diversity of business and industry representatives and more of the main stream than of First Nations. And I think that’s a good thing when we are doing these types of awards because it speaks to the kind of relationships and clients and customers and partners that our First Nations are developing in this province.”