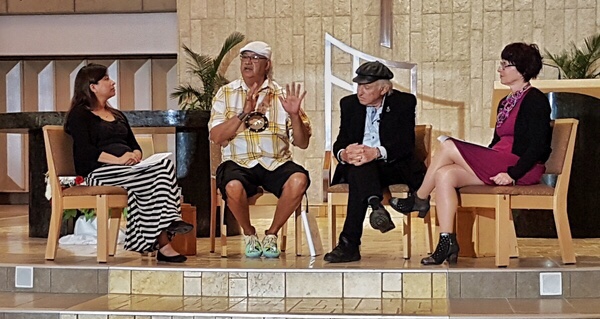 Two survivors from different traumatic times in history sat down to have a dialogue called the Courageous Conversation.

On June 4th, residential school survivor Eugene Arcand and Holocaust Survivor Nate Leipciger shared their stories with one another in front of over a thousand Saskatoon students to provide the audience with a deeper understanding of the challenges they faced.

“I spoke with Eugene and we had common experiences, common trauma and certain common loss,” he said. “We [didn’t] compare our suffering but we talked about the common elements of our past.”

Leipciger, originally from Poland, survived the Holocaust in German-occupied Poland. He was 10-years-old when he and his family spent years trying to avoid capture in the ghettos but they were discovered and separated. He lost his family after he was moved around different concentration camps during the German occupation of Poland. Leipciger lost his mother and sister as well as other family members. He immigrated to Canada in 1948 along with his father and has resided in Toronto for the past 70 years. Prior to the Courageous Conversation event, Leipciger said he was familiar with the history of residential schools and had heard of Arcand’s residential school story.

Arcand from the Muskeg Lake First Nation was a part of Canada’s terrible legacy of residential schools that has caused profound suffering and loss for Indigenous people. Arcand was 6-years-old when he was taken away from home and placed at the St. Michael Indian Residential school in Duck Lake where he attended for 10 years and 1 year at the Lebret Student Residence.

CeCe Baptiste, SIIT’s Associate Director of Finance, helped bring Arcand into the idea of sharing his story in the Courageous Conversation event. She said she truly appreciated the honesty that Arcand and Leipciger shared their commonalities between their two experiences.

“I was quite touched and I felt really honoured to hear their stories,” said Baptiste who helped co-moderate the event along with Heather Fenyes. “I found Eugene and Nate understood the impact that they were having on the students.”

Baptiste hoped attendees took away a common understanding of what the two different cultures had endured in the past.

“An opportunity such as this, where you have a survivor from the holocaust as well as a survivor from the residential school, being able to share their stories and talk alongside each other is extremely rare,” said Baptiste. “We are going to lose those opportunities as people grow older.” 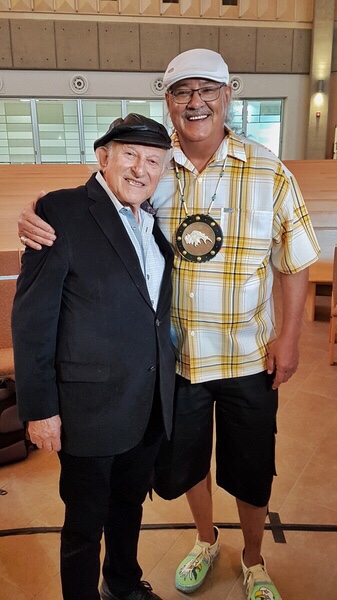 David Fisher, the Executive Director of Concentus Citizenship Education Foundation, helped organize the Courageous Conversation event. He said the two survivors both survived something horrific; a deliberate and mechanised genocide. He added the event wasn’t a comparative exercise but to discover parallels as each situation were unique.

“It was discovering the dark commonalities and also the inspiring commonalities,” said Fisher. “They talked about strength and resilience…there was a genuine chemistry as they spoke to each other. It was very emotional at times and they were very generous with what they shared.”

Fisher said with the number of students that attended, during the two-survivor dialogue, you could hear a pin drop.

“I was taking a moment to survey the room and students were glued to their words on what they were saying,” he said. “There was a spontaneous standing ovation for them at the conclusion.”

Leipciger and Arcand ended the Courageous Conversation by encouraging the students not to be bystanders but to be upstanders and to get involved when they see an injustice. It was a momentous time for the two survivors to treasure.

“Eugene and I had meetings of our spirit and we’re two spiritual individuals. Our understanding interaction of each other, I cherish very much,” said Leipciger. “I hope we can continue this dialogue on many other occasions.”