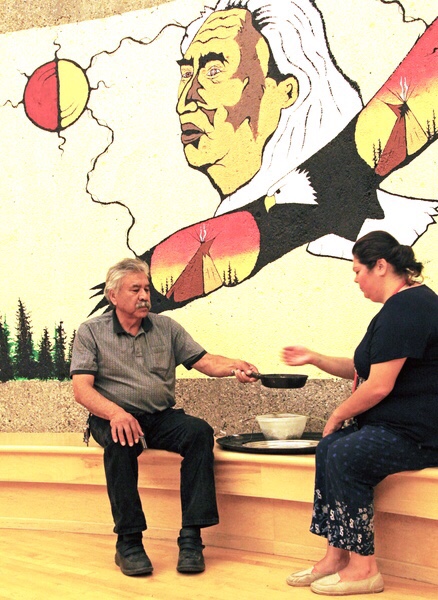 Speaking in his office, surrounded by gifts from patients and community members, the Native Health Services’ Elder recalls when the woman’s doctor asked him to come to the unit.

“They had come to consensus that they were going to stop all treatment and let nature take its course by disconnecting all life support,” said Francis.

At the unit, he found a throng of people who loved the woman gathered to say their goodbyes. Francis helped coordinate for loved ones to go in four to six people at a time.

His role didn’t end there. While leaving the unit Francis overheard a young nurse blurt out, ‘Why are there so many Indians here?’

Francis took that opportunity to teach her about Indigenous kinship.

The role of Elder at NHS has always focused on patient care.

The first Elder was Emile Piapot, grandson of Chief Piapot, who could speak and write in English. He had the teachings of the old people and was one of the ceremonial people.

Piapot’s knowledge of English made him especially valuable to his people in the white man’s hospital.

The NHS opened in 1982 and focussed on patients in the Emergency Department and the Pediatric Unit, said Director Brent Robison in an email.

It is now embraced within the primary care team. Instead of receiving a small honorarium, Elders are now part of a union.

Francis, a certified addiction worker with advanced counseling certificates, is available to help families and also welcomes them to bring their own Elder.

The Elder’s office is open from 8 a.m. to 4:30 p.m. but he often stays late into evenings helping to conduct ceremony. One of the most significant changes Francis has overseen is now dying patients are sometimes moved from the medical unit to the spiritual room to have life support disconnected, so family can gather and conduct whatever ceremony needed.