Op-ed: No better time to be Indigenous in SK

I always say that it’s never been a better time to be an Indigenous person in Saskatchewan. All the good news and events in May and June so far are evidence of that. Lots of things are lining up. Thank goodness for the Calls to Action from the Truth and Reconciliation Commission. People are actually adopting them. 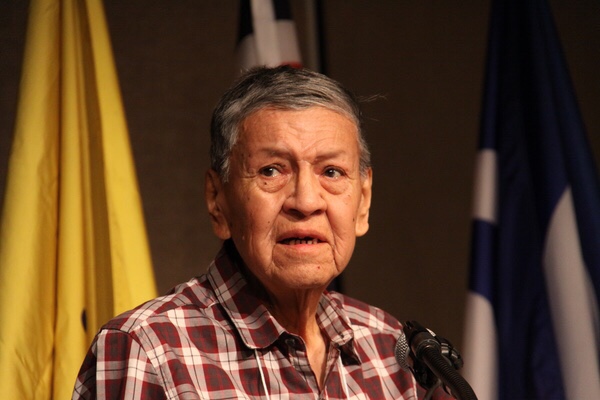 Joe Quewezance recently received an honourary doctorate from the U of S.

I spent several days in Regina this month. Things were going on. The First Nations University of Canada was hosting the Indian Communication Arts Summer Institute on Journalism. Our Jeanelle Mandes was one of 40 different instructors working with twenty-four students over a month and a half of intense training n radio, web, newsprint and TV. Many of their stories are in this issue. Most of those stories tie to a Call to Action.

At the same time as the Institute, the University of Regina was hosting Congress of the Humanities and Social Sciences, a conference for 5000 academics from around the world to get together and think and share thoughts. This gathering had lots of “Indigenization” and reconciliation presentations available and was a very strong theme. Indigenous academics everywhere.

Many of those academics and writers came together for the official book launch of ‘kisiskâciwan’ packing the Atrium of FNUniv with dignitaries, students, family and many of the writers that contributed to the book. Jesse Rae Archibald-Barber edited the book. The book contains rich, oral narratives from First Nation and Métis cultures from Saskatchewan and contains the voices of dozens of Indigenous leaders and writers.

Maybe some of these names are familiar to you. Big Bear, Thunderchild, Louis Riel, Gabriel Dumont, Edward Ahenakew, Maria Campbell, Buffy Sainte-Marie, Rita Bouvier, Harold Johnson, Gregory Scofield, Warren Cariou and Louise Halfe. And there are several more. It has speeches, poems, lyrics and several different stories from our past and present. I have officially found the first book for my summer reading list.

Also last month we found out that former Tribal Chief and Elder Joe Quewezance and our favourite columnist, renowned writer, Elder and teacher Maria Campbell are both to receive honourary doctorate degrees this year. Joe from the University of Saskatchewan and Maria from the University of Winnipeg. These fine folks are leading the way for our future graduates. Did you know the Indigenous graduation class has grown every year for the past several years? That’s awesome. In 1960 there were 60 ‘Indians’ in university in all of Canada. Now they estimate 35,000.

To support those students, the Provincial Ministry of Education, the folks responsible for K-12 curriculum and outcomes have had every available employee in their Ministry go through a full day Aboriginal awareness seminar. That would never have happened 20 years ago.

All of the above education initiatives and gatherings answer Call to Action 63.

On the business end we saw SaskPower and the First Nations Power Authority (FNPA) sign a First Nations Opportunity Agreement to source 20 megawatts of flare gas power generation projects with the Flying Dust First Nation. The project is worth an estimated $300 million of potential revenue over 20 years, which represents significant new economic development and opportunity for power projects led by First Nations communities and businesses. Nice.

Also, once witnessed the Saskatchewan Industrial and Mining Suppliers Association bring over 60 of their members to network with Nutrien employees and the seven member First Nations of the Saskatoon Tribal Council to learn about jobs, joint ventures and partnership opportunities tied to the Nutrien supply chain. Business and opportunity. Both answer Call to Action 92

And have you heard? Several land claims and specific claims have entered into the compensation and negotiation stages in Saskatchewan. The Federal Government has recognized the claims of the James Smith, Peter Chapman and Chakastaypasin First Nations after decades of work by those leaders. They lost approximately 60,000 acres dues to fraud, and there is more. Word is also out that Black Lake has reached a settlement on their “cows and plows” claim with the government and are figuring out what to do with it. Call to Action 47.

How about that? During this month of celebrating National Indigenous History Month and People Day, take the time to read those Calls to Action and take note of what is going on around you in your community. Read ‘kisiskâciwan’ to understand the impacts and admire the resiliency. Lots of good things are happening in this province. Celebrate it.