With a tenacity perhaps inspired by her subjects themselves, award winning documentary filmmaker Tasha Hubbard has completed a remarkable movie.

Buffalo Calling, a 12-minute film about the demise of the great herds on the plains of North America, is a stunning portrayal of a crucial historical period, replete with beautiful windswept landscapes and impressive images of the sacred beasts.

Hubbard was inspired by an article she read about the buffalo in Canadian Geographic.

"It made me wonder what the impact had been on plains Indigenous peoples to lose the buffalo so drastically," explains Hubbard, who won a 2005 Gemini and Golden Sheaf for Two Worlds Colliding, a documentary she wrote and directed.

"I wanted to make a documentary about the slaughter and recovery of the buffalo but then I started my academic work and they became my research area. While I was working on my PhD, I realized I wanted to explore a visual form of storytelling about one particular herd's survival."

At that point, as filming moved to the vast Grasslands National Park in southern Saskatchewan, Hubbard began to learn about patience and persistence as she sought to film the bison herd that now includes more than 300 animals.

"I budgeted for a two- to three-day shoot and was confident that we would get the footage we needed in those two days. We spent almost the entire two days walking and walking miles and miles across the prairie, and only getting within a half-mile of the herd," Hubbard says.

"It took two summers and seven shoots to finally get close enough to film them. I can hardly remember the details of the 10-15 minutes we had to film while they were curious enough to stay close, I was so excited. But the whole process taught me to be patient."

The project was truly a labour of love for Hubbard whose research uncovered some startling statistics.

"I think the most revealing thing was exactly how low the population got. Some estimates say 250 or 500. In the 1890s, a conservationist employed by the Smithsonian went out and killed 29 bison in order to stuff the 'perfect specimens.'

"The subsequent display appears in the film, representing the depth of the destruction and what remained afterwards." 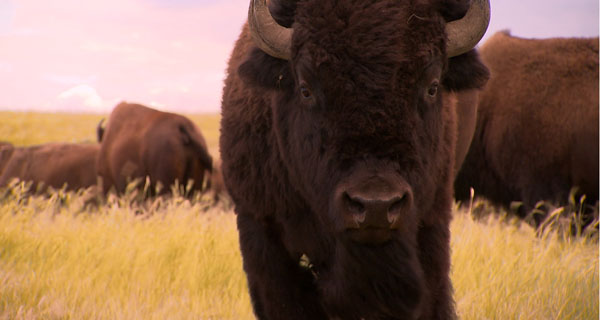 The visual aspect of Buffalo Calling is breathtaking and includes a segment during which the screen goes red, signifying the end of an era and nearly the end of an entire species. There is no narration in the film.

"It is partly my own challenge to move away from narrative filmmaking to a more visual style," Hubbard says.

"But I also thought that many people never actually hear the buffalo so I wanted their voices to be central in the film."

Despite the challenges of making Buffalo Calling, Hubbard says she felt some sadness when the project was completed.

"I felt sad because I had spent so much time out at the Banff Centre, where we did the animation and the audio. The people in the Film and Video department became friends and the little apartment I stayed in, sometimes with my son, was like a second home.

"But it also felt satisfying, because of the length of time it took, both with the filming, but also balancing the film with my other responsibilities." 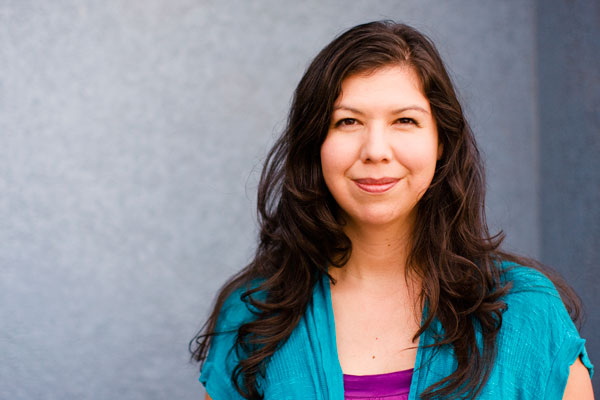 And the responsibilities continue in Hubbard's busy schedule as she juggles motherhood, academic life and more filmmaking.

"I am finishing my Ph.D. dissertation, and on July 1, I start a tenure-track position as Assistant Professor in the Department of English at the U of Saskatchewan. I started there in a term position last July, and I am excited that it has turned into something potentially permanent."

Hubbard has also begun to develop the feature documentary on buffalo that she has wanted to do for the last eight years.

"I am working with Wes Olsen and Narcisse Blood, who were my guests at the Broadway-ICCC screening. Along with our producer and my son, we are heading to Montana in May to visit other descendants of the same herd who are at the American Prairie Reserve. And I have some other ideas for combining my research and my film work."

Buffalo Calling is currently doing a festival tour and Hubbard hopes to have community screenings and eventually release a DVD version with an information booklet that will provide background on the herd and an update on its status.