The Native Law Centre at the University of Saskatchewan’s law school is entering a new era, as staff work to reflect the changes in Aboriginal law since the centers’ 1975 opening. 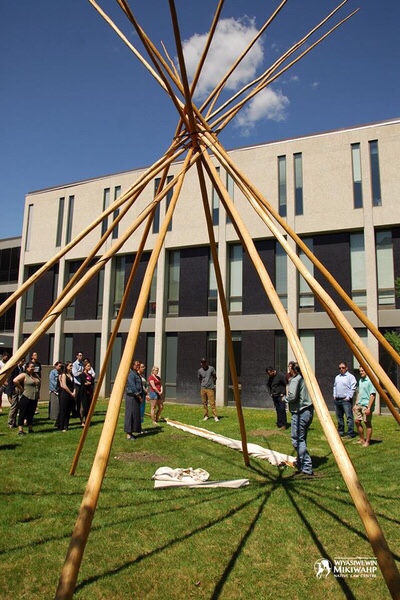 “It’s kind of like the stars aligning themselves. Changes have occurred in the field of law and reconciliation and the centre should change accordingly and be more proactive with respect to promoting reconciliation,” said Larry Chartrand, the centre’s academic director.

This September a new mandatory course for first-year law students will run -- it is in direct response to the Truth and Reconciliation Commission’s Call to Action for law schools to be more inclusive of Indigenous Peoples, said Chartrand.

“The importance of lawyers to be culturally competent about who Indigenous peoples are in order to be able to represent their interests adequately,” Chartrand said.

Chartrand describes Aboriginal law as Canadian law as it relates to Indigenous people, whereas Indigenous law is the traditional laws of Indigenous Peoples themselves.

This course is just one of the many changes the Native Law Centre is undergoing.

In May there was a Cree naming ceremony where the centre became the Wiyasiwewin Mikiwahp Native Law Centre, which means law making tipi/lodge, said Chartrand. The naming coincided with the release of the new mission, vision and 70-page strategic plan.

“The name of the Native Law Centre is significant, it represents the vision of [founder and former College of Law dean] Roger Carter and his belief in the intellectual capabilities and resiliency of Aboriginal students to succeed in law school,” Sákéj Henderson, research fellow at the College of Law said in a release on the centre.

“The centre has been gifted many honours by the Aboriginal elders, knowledge keepers and community, but none was more important than earning an Indigenous name.”

A lot has happened since the opening of the college, said Chartrand, listing the expansion of the field of Aboriginal Law, the adoption of the United Nations Declaration on the Rights of Indigenous Peoples, and the release of the Truth and Reconciliation Commission’s Calls to Action.

The centre has always been strong, he said, “we are building on some of these strengths.”

The document, which received feedback from Elders, the Indigenous Bar Association, law professors and other stakeholders, charts a way forward for the centre. Community involvement and capacity building around Aboriginal law plays a central role, including the Gladue Awareness project, which is holding sessions around the province this summer.

There is a lack of venues for specialized Indigenous law commentaries, articles and papers, Chartrand said.

“We thought we could fill a niche there by expanding [the native law centre’s] publications and creating a new law journal,” he said.