A sod turning ceremony took place at the Muskeg Lake Cree Nation 30th Anniversary on Thursday to celebrate the construction of the new headquarters for the Saskatchewan Indian Gaming Authority (SIGA).

The two-storey building will be constructed on Muskeg Lake’s Asimakaniseekan Askiy urban reserve, and will be entirely occupied by SIGA staff. 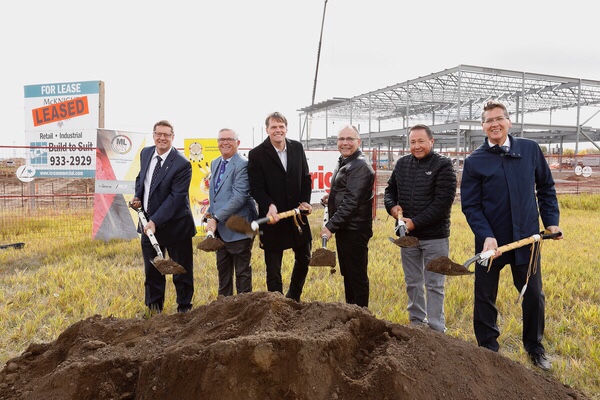 The new building will be 50,630 square feet, and will include a head office for SIGA’s new Slot Management program. The future SIGA headquarters will bring Muskeg Lake Cree Nations’ total developed space to over 185,000 square feet.

“This is a new opportunity to bring everyone from SIGA together and centralize locations. To bring better performance and better efficiency, so the end result is more revenue going back to our communities. That’s our goal,” said Reginald Bellerose, SIGA Board of Directors Chair. “It’s a big accomplishment today. We are all looking forward to more growth in the future.”

The new building will be 50,630 square feet, and will include a head office for SIGA’s new Slot Management program. The future SIGA headquarters will bring Muskeg Lake Cree Nations’ total developed space to over 185,000 square feet.

“SIGA has been a staple tenant with us for over a decade,” said Murray Westerlund, Board Chair of Muskeg Lake Investment Management Corporation. “We are ecstatic with the decision they have made to expand their new head office (on the) urban reserve.”

“We’ve had a relationship with SIGA since 2003 in our urban reserve here. A smaller footprint, of course,” Westerlund told reporters. “We are slowly running out of land. We have less than 10 acres left now to develop.”

SIGA has over 1800 employees, 65% of which are First Nations or Metis people.

Their organization is a testament to how a company can help move a province and workforce forward, said Mayor Charlie Clark. “This is one of the largest social enterprises in Canada (...) And so many of the profits from SIGA go back into the communities – not just First Nations communities, but all of the communities that surround. We as a whole community of Saskatoon benefit tremendously from that,” said Clark. “It’s a tremendous vision that is something that we can really build on when we think about the province we want to become, and the city we want to become, where everyone has a shared opportunity to rebuild, shoulder to shoulder, a future together,” he said.

Westerlund hinted at another large project at Muskeg Lake Cree Nation, one of about 65,000 square feet, to be announced in the near future.