Neechie Gear founder tells his story “from poverty to podium”

Kendal Netmaker is best known for founding Neechie Gear, but the entrepreneur and speaker is now also an author. “Driven to Succeed: From Poverty to Podium” tells Netmaker’s story, from being the child of a single mother of four on welfare on Sweetgrass reserve, to his success and shareable strategies for replication. The inspirational five steps include making simple choices, using the power of story, turning pain into gain, and elevating your circle of influence.

The book launch was at McNally Robinson in Saskatoon on October 11th. 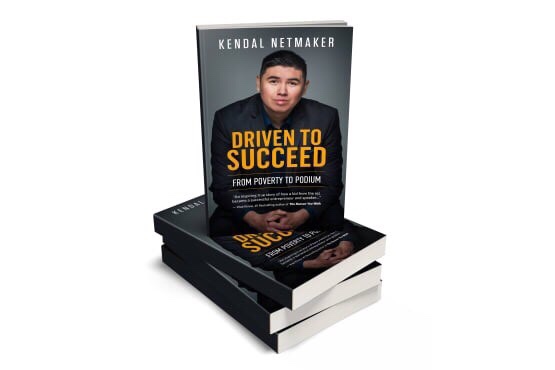 Kendal Netmaker’s book can be found at Saskatoon’s McNally Robinson, Amazon, and his website.

“The book is a two-in-one — my story, and the story of other people, plus a personal development and self-help book,” says Netmaker.

Netmaker was the oldest and only son, with three younger sisters.

“My mom and gramma raised me and my mom sacrificed for me - she wrote the introduction to the book. My younger sister Kendra has a chapter, overcoming domestic violence,” said Netmaker, adding that the book addresses many personal and familial obstacles that people don’t know about. “People see success but they don’t know the whole story — it’s vulnerable and real, what we’ve been through.”

His goal is to inspire others to do things with their live — “whatever it is that they want to do.”

He includes his Neechie Gear story, and how he got into being a speaker. He began the book project back in July of 2016, after chatting with Wab Kinew and planned it out. He began anew in summer of 2017 and finished it up in December of that year.

“I entirely self-funded the project, so it cost $25,000 — I wanted it to be done very well and I think I did it,” said Netmaker, adding it can be obtained on Amazon or his website. “One of the things throughout my whole life and in the book, is that I tried not to rely on anyone but myself.”

This includes the book process, where he learned every step “so I can focus what I'm good at and get help with the rest.” He used a similar approach with Neechie Gear.

“I was screenprinting my own shirts, and I made lots of mistakes...all the good stuff came when my back was against the wall, people that come from privilege don’t have that gutsy grind,” said Netmaker, adding that when you’re handed free things, you don’t appreciate the work that goes into attaining it. “Growing up in poverty if I wanted a Nike shirt I had to find a way to save up and buy one and had to do the same with my business. That’s what creates fulfillment in anyone’s lives, finding a way to achieve a goal is true fulfillment.”

Netmaker thinks the number one lesson in the book is to make a clear decision what you want to do with your life.

“Whatever path you’re on, make it your decision to be the best at it.”