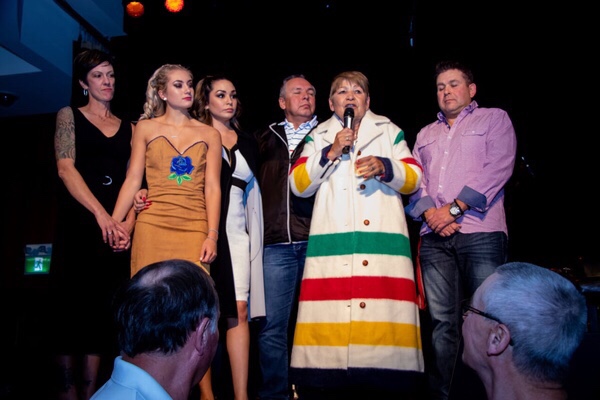 Saskatoon’s Central Urban Métis Federation Inc. (CUMFI) has celebrated 25 years of contributions to the city and residents, and at the end of September, held a three-day Métis Cultural days celebration at the Western Development Museum for the community to enjoy.

“CUMFI is a community organization, we work in pretty well all the challenges there are in the core area of Saskatoon, with addictions, homelessness, HIV/Aids, Fetal Alcohol Spectrum Disorder (FASD), poverty — we want to help families have a better quality of life,” said CUMFI President Shirley Isbister. “Education is huge for us and I think one of the biggest things that CUMFI does is supported living and the coming home program, we move Indigenous moms into these homes and their children are returned from foster care. Since we’ve started, we’ve brought over 1200 children home from foster care.”

She added that the safety of children combined with reuniting them with their parents has always been a goal for CUMFI, and in general the mission statement includes self-determination and self-reliance, improved social and economic conditions for Métis people, and improved quality and standards of life. The CUMFI mandate also includes the promotion of the heritage, cultural, economic, educational, and social well-being of Métis people.

“We also have a home for single moms, single dads, two-parent families, and one home for moms living with HIV/AIDS so their children can be returned home,” she said, listing additional homes including a transition house for men recovering from addictions, and Hessdorfer Home for those living with cognitive disabilities. “For me, the 25th anniversary of CUMFI was all about celebrating community. We do a lot of work in reconciliation, as well.”

Isbister lists some of the many accomplishments of CUMFI over 25 years: Infinity House, the high-risk home which was the first home to open in March of 2002.

“And all of the supported living homes, all of the programming that we do, we have the most amazing staff, staff that have been with us many man years — those are some of our highlights, as well as being involved in reconciliation,” said Isbister. “And being community. I keep saying that because when I think of CUMFI that’s what I think of. That we’re all about community.”

Isbister said part of the strength of CUMFI also comes from their solid partnerships, such as the strong partnerships with the Saskatoon Public and Separate School Boards.

“We have partnerships and agreements with both of them to move Métis culture education language and history forward. St Michael’s School has been designated a Métis school,” said Isbister, adding this means Métis programming, education, culture, and the Métis flag are all present. A similar partnership exists with Westmount School. “In both schools this year we have partnered with school boards to have Métis teachers and language in both school systems. There are fiddle and jigging programs in St Michael’s, and jiggers in Westmount, and the children are taught language.”

“We’re hoping to bring the Michif language back into Saskatoon and having it taught - that’s our challenge is finding Michif teachers, Michif speaking teachers,” Isbister said. “We also have Kohkom’s house, when you need a break from your children, our moms and dads in our homes have that same opportunity, kids can go and visit their Kohkom while their parents have a break.”

The focus is on family as well as the youth, and the present as well as a future which honours the past. Other services include grief and loss counselling, affordable housing, economic development programming, residential and commercial landscaping/yardcare services, and many other initiatives and partnerships in the community.

“CUMFI celebrated 25 years by recognizing a remarkable group of community builders,” tweeted Saskatoon Mayor Charlie Clark. “The combined impact of this group on Saskatoon is incredible.”

Gilles Dorval, present Director of Aboriginal Relations for the City of Saskatoon, was both honoured and humbled by the recognition, and praised CUMFI contributions over the years.

“CUMFI, in the celebration of Métis Days, really brought forward the pride in the Métis community, building on all our relations with the diverse community of Saskatoon,” said Dorval, crediting the hard work of the committee. “CUMFI does a lot of work for the people — affordable housing, support services, people with children in care, those types of initiatives — and the programs and services they provide for the people of Saskatoon really have created a better quality of life for the whole community.”